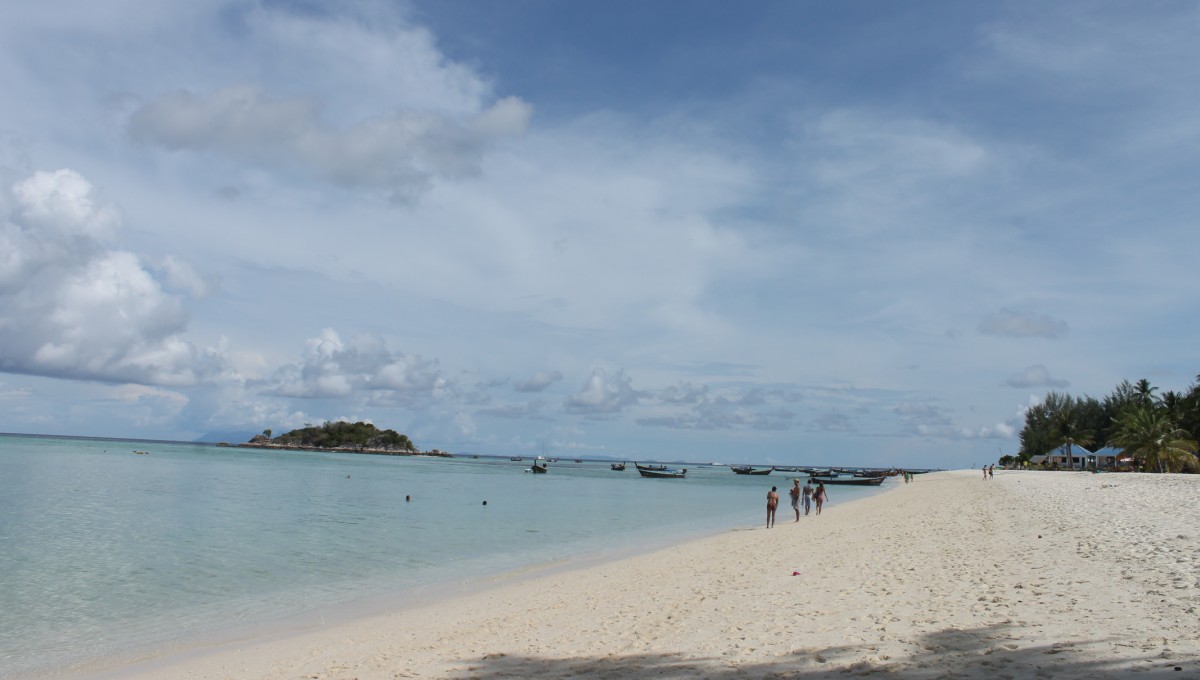 The Langkawi Ferry Service boat from Malaysia to Thailand left Kuah Jetty in Langkawi at about 9am. We’d booked with Langkawi Ferry Service who are currently dominating inter-island transport because they have online booking forms (in English) which allow you to book more than 7 days in advance. Passport control at Kuah was the briefest we’d yet encountered and we were soon following the ferry guide onto the boat. The ferry was slick and streamlined but its windows were all crusted up with salt which hinted at the barrage of waves to come. It was a relief that we could only feel them bash against the sides but in an attempt to keep people’s spirits up, a string of Kung Fu and boxing films were played at maximum volume(!) 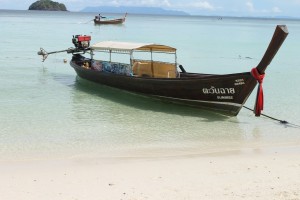 A few hours later, we had crossed the oceanic border between Malaysia and Thailand and had arrived in Koh Lipe’s astonishingly clear waters. The ferry came to a slow halt about 100 metres from the shoreline, the closest it is allowed to go, given the reef which surrounds the island. The ferry was met by a couple of longtail boats which are owned and operated by the Chao Ley (literally translating as people of the sea), also known as the sea gypsies who inhabit half of the island. Each of their boats is brightly decorated with day-glo tassels and fashioned out of wooden slats with a bamboo floor. They are the only craft that can manoeuvre safely along the reefs and are therefore the only way on or off the island as there is no jetty. 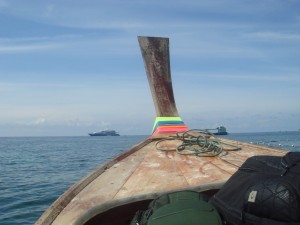 There was a lot of scrambling as passengers and luggage were parcelled onto the longtails, which began to rock precariously. Trousers were rolled up and shoes removed as we all prepared to disembark in the shallows, carrying backpacks overhead to make the short walk to the beach-hut-style port-a-cabin which housed the immigration office (and was conveniently located next to a bar). This has got to be one of the world’s most relaxed immigration points where laid back officials stamp in their daily quota of 40 or so new visitors to the island before heading back to their hammocks. We waited on the sand for of a couple of minutes while our passports were inked with a 15-day permit 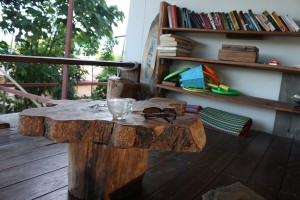 (there is a bit of discrimination towards those arriving overland as you only get half the number of days that air arrivals are entitled to) before traipsing off through the island’s tiny main street, which is dotted with coffee shops, bars and restaurants to find our B&B. We realised quite quickly that it had been a mistake to book in advance – we passed many nice beach-side guesthouses before reaching ours (The Reef) which was quite pricey by island standards and slightly inland. Having said that, it was extremely peaceful, had beautiful views across the island, had been sustainably constructed with an outdoor stilted wooden platform from where breakfast was served and had an excellent book exchange library.

Koh Lipe is sadly starting to face the same fate as many other Thai islands where much of the available beach-front space is being gobbled up by developers whose aim is to create luxury resorts of one sort or another. 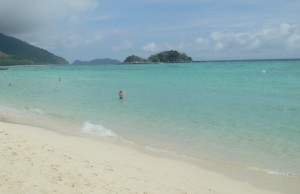 Importantly here however, development has been slower and more tasteful than elsewhere in Thailand due to its unique situation: Koh Lipe doesn’t have an airport or jetty; it’s surrounded by the Tarutao National Marine Park where development, and the use of speedboats and jet skis are banned; the Chao Ley (who have animistic beliefs) own and run a number of the island’s accommodations which they have been able to hold onto in the face of aggressive competition from wealthy developers due to official recognition of their ancestral rights to the land; and plastic cards are as no-go as plastic bags as there are no ATMs to be found anywhere. You can’t help but feel that all these things have saved the island from going the way of Ko Phi Phi and the like for the time being and it was still possible to find stretches of almost deserted beach even in January, which is considered peak season. 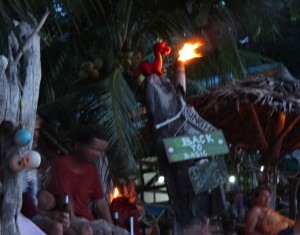 The island itself is very small – spanning only two kilometres from end to end. There are three main beaches where most of the island’s accommodation can be found: Sunrise, Sunset and Pattaya beaches. Each beach has its own character – Sunrise beach is where the sun worshippers and dive enthusiasts hang out, Pattaya beach (where the longboats drop off new arrivals) is probably the busiest and is home to the island’s smarter bars and hotels, and Sunset beach (reached via walking through a Chao Ley village and wood) is the hippie zone where tiki torches are lit at dusk and deathly alcoholic cocktail infusions are doled out for next to nothing. All these are connected by the island’s one and only shopping street where you can get everything from a Thai Green Curry to a Tattoo or an Indian head massage. 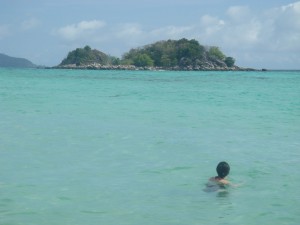 We spent most of our time on Sunrise Beach, which is lined with small bamboo bungalows and is also a fantastic jump-off point for exploring the reef. For the equivalent of 50p you can rent a snorkel mask and flippers for the day which gives you the opportunity to spot Clown fish, Trigger fish, Blue Tang, Parrot fish, glowing sea urchins, and much much more just a short swim away from the shore. I couldn’t help but contrast the experience with that of Pulau Langkawi and was thankful that there is simply no room for an airport on this island, which seems to have made all the difference where rash tourism-oriented construction is concerned. 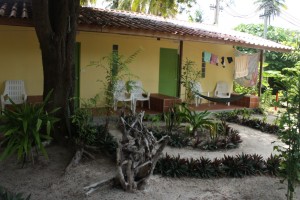 Once we had explored a bit and started to understand what a relaxed way of life really meant, we decided that we wanted to stay for a few nights more before the onwards journey to Bangkok. We found a reasonably-priced spare room in a little eco guesthouse called the Adang Sea Divers which was just minutes walk from Sunrise beach. The cabins were basic but mosquito nets and ‘moon tiger’ coils were provided and we were never really going to spend much time in the cabin with the beach so close anyway.

The Adang Sea Divers is run by an environmentally-conscious Swiss couple, who have set up rain-storing water tanks as well as septic tanks to break down and filter used water, which they then reuse to water the plants etc. They told us that many hotels on the island do not filter their grey water and it is either siphoned off into sand pits or directly back into the sea. 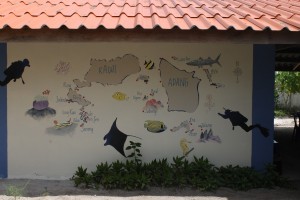 Awareness of the problem is growing but it is still an uphill battle, especially in the face of a growth in tourism. The Adang eco-lodge is primarily a dive centre but the staff are happy to provide you with a snorkel and fins if you don’t want (or in our case can’t afford) to dive. There is information everywhere about the reef and its inhabitants which is really helpful in identifying all the strange and magical creatures you encounter whilst exploring it. Thankfully, the Chao Ley and most of the foreigners who have set up homes and businesses on the island are fully aware that they are sitting on a little piece of paradise and are fighting to keep it that way (most noticeably by clubbing together to enforce the introduction of long term environmental strategies such as waste management and recycling schemes for the island) but the accommodation choices that visitors to the island make is a hugely important part of this battle. 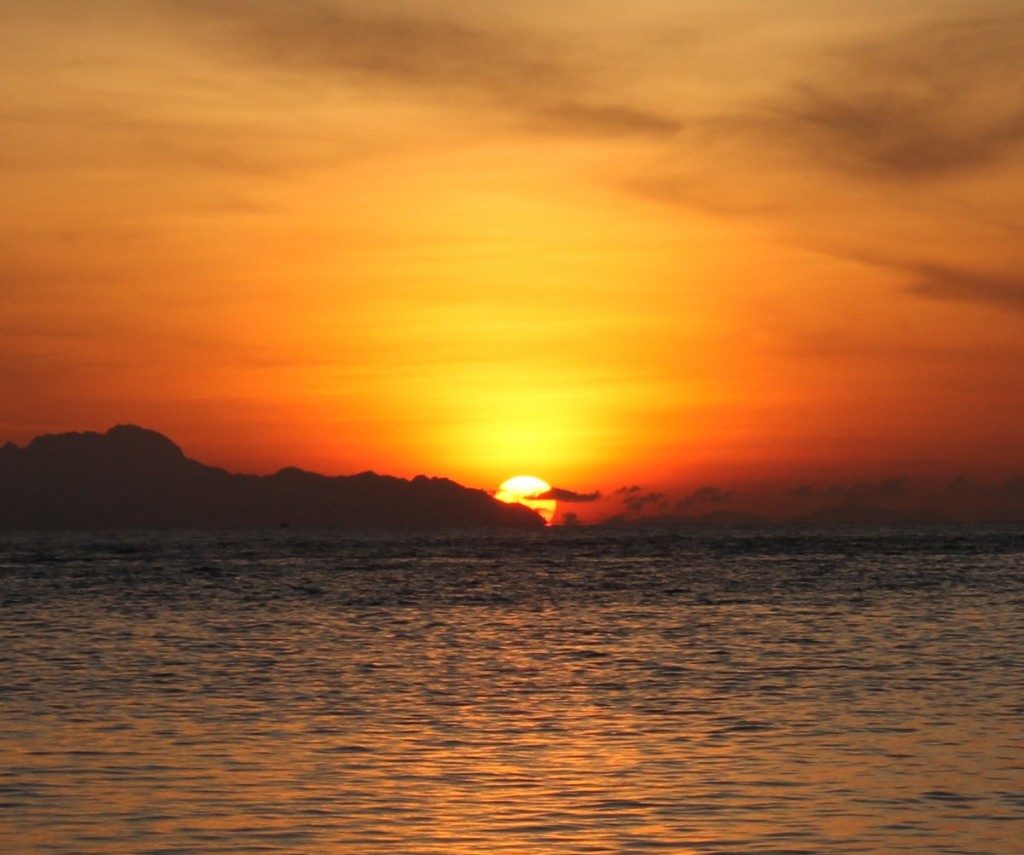 Our last day on the island came around far too quickly but we made the effort to wake up early to see the spectacle that Sunrise beach is named after. 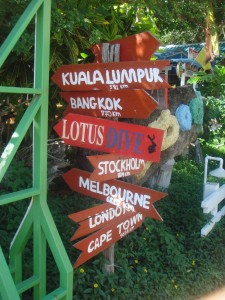 It was well worth it as we, along with a few other early risers, sat on the beach to watch the sun slowly emerge from beneath the clouds. It was very difficult to tear ourselves away but with the clock ticking on our 15 day visitor permit, we knew we had to get to Bangkok where we hoped to procure both out Vietnamese and Chinese visas before heading for the Cambodian border. We collected our bags together, bid our hosts farewell and walked the short half-kilometre through main street to meet the island’s infamous ladyboy ferry ticket collector. We were headed for Hat Yao pier, a three hour ferry ride away and then from there onto Trang where we were hoping to get the train to Bangkok. Stupidly we had forgotten about Chinese New Year…

Tweet
This entry was posted in Travel and tagged South East Asia, Thailand. Bookmark the permalink.