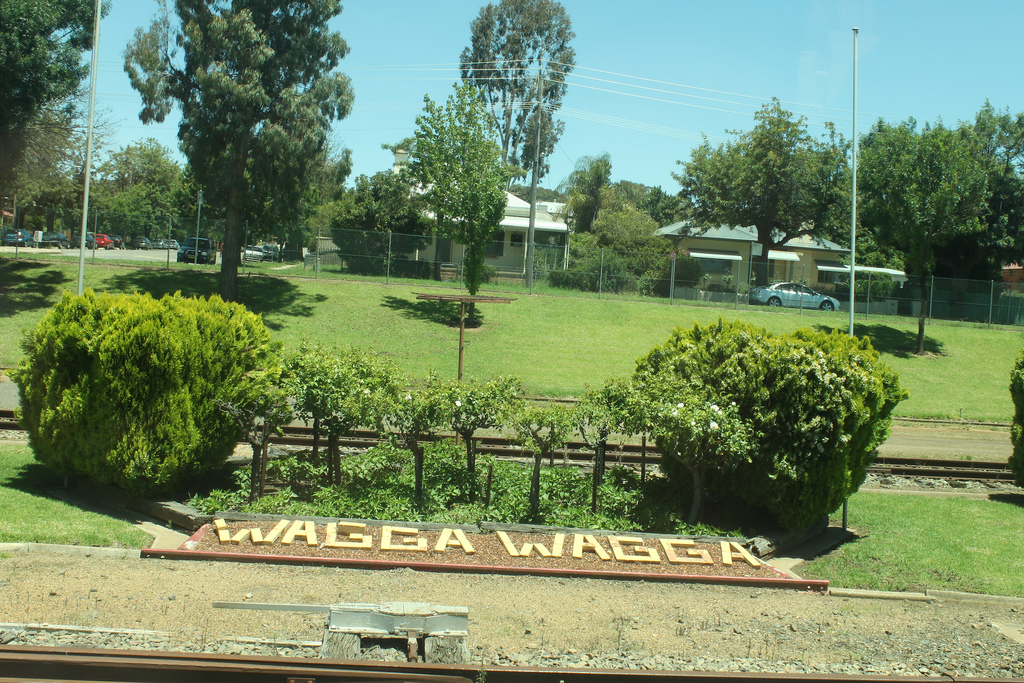 There is no direct train from Melbourne to Brisbane, so we had to go via Sydney and then change. The journey to Sydney and the onwards route to Brisbane each take about 11 hours, so it’s a good idea to stop overnight in Sydney if possible, though due to current train timings it is likely you will have to spend at least one night on board. Either way, we left plenty of leeway in case the Brisbane port agent called to tell us there had been a change to our freighter’s docking schedule (which does happen, if bad weather strikes). 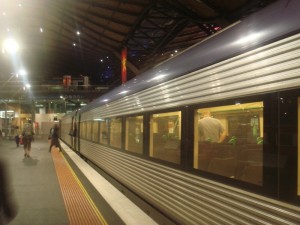 We left Melbourne heavily laden and in a rush to meet our 8.30 am train. For some reason, I was stupid enough to think that we could have bundled all our things onto a tram – which it soon became obvious we could not, given that it was also peak commuter time. Instead, we took the first and last taxi in Melbourne and made it to the station just in time.

With the light of our experience of the city, the passing scenery of Melbourne’s suburbs looked quite different to when we arrived; we saw many railside graffiti pieces, for example, which we now recognised the style and understood the context of. We were sad to leave Melbourne just as we had began to really settle in but we knew we were going to have to get used to being on the road again, so we tried our best to re-adjust as the suburbs began to melt into farmland. 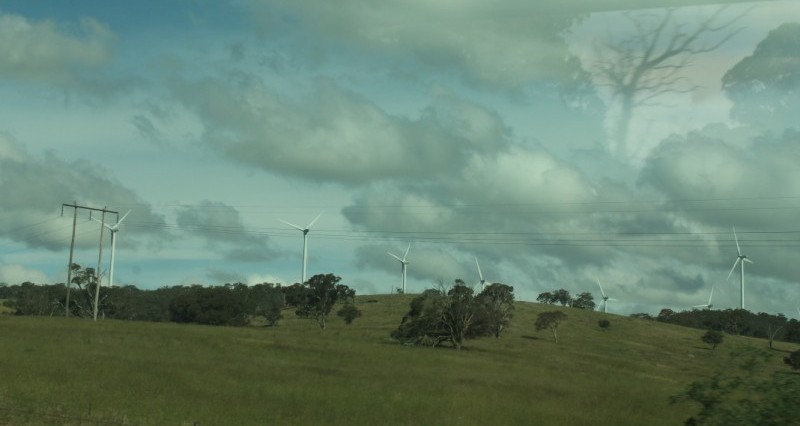 Once we passed a town called Albury, the terrain became much more undulating and hilly – lush pastureland perforated with small man-made holes (‘dams’ in local terminology) to collect rainwater for the grazing animals. Because it was sti 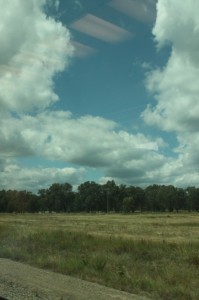 ll early in the morning, or perhaps because our eyes were now more finely tuned, we glimpsed kangaroos and emus feeding among the long grass of some passing fields.

Further east, the terrain becomes more dry – shrubland and plains with small patches of isolated forest dotting the hilltops. The rocks, where they have been exposed by the elements, are the characteristic bright orange and crimson red that you see in the landscape paintings of local artists – when covered by foliage they appear a lush green or dry yellow.

As we approached Sydney, we passed straight into the path of a brewing storm. A deep mist absorbed th 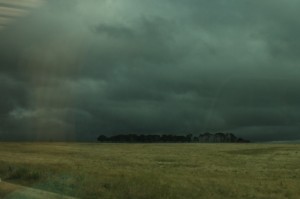 e landscape for the next hour, cutting our visibility to only 30 metres or so. As we entered the storm cloud, the temperature in the carriage began to fall and I was wishing that I had packed my jumper in a more accessible place! Just as the rain clouds looked fit to burst, we pulled into Sydney’s Central Station. After yet another fracas with the bags, we ended up very glad that we had chosen a place to stay that was within walking distance of the station. 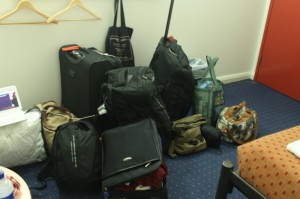 We spent most of our time in Sydney un-packing, de-cluttering and re-packing the bags, leaving some stuff in the hostel box and posting other things home. Fortunately there was also some time in the evening to have a little explore. We found a great Malaysian restaurant (good preparation for Port Klang) where we ate some satay dishes and drank some cham (half coffee-half tea which actually tastes quite 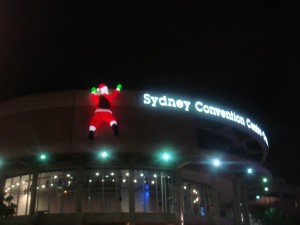 good) before heading to Darling Harbour for a walk. This is an unlovely part of the city full of conference centres, chain restaurants and large hotels clustered around the waterfront. Given the temperature, we had almost forgotten that it was only a week to Christmas, until we noticed a giant inflatable Santa climbing the nearby convention centre. 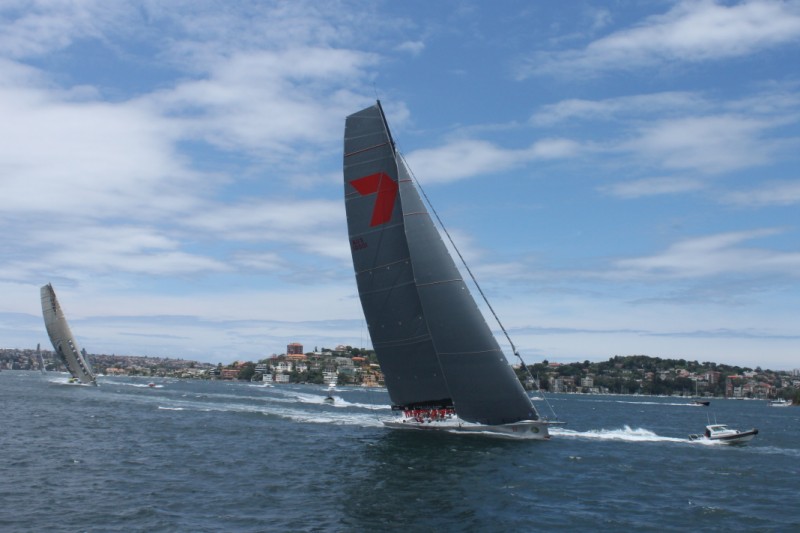 Our overnight train to Brisbane wasn’t scheduled to leave Sydney until 4 p.m., so we had some time the next day to take a quick trip to Manly Beach, a forty-minute ferry ride from Circular Quay. Taking the ferry to Manly gave us a fresh perspective of Sydney – the city’s suburbs appear to be laid out all along the coastl 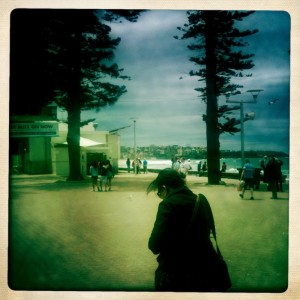 ine of both sides of the inlet, and many people travel to work by ferry, which I could immediately see the appeal of. The journey couldn’t be more different to the packed crush of the rush-hour commute on the Northern Line. Manly itself is a cosmopolitan seaside suburb, which feels removed enough from the city centre to maintain its own identity. We had a little bite to eat and then it was time to head straight back on the next ferry, to make sure that we didn’t miss the train! 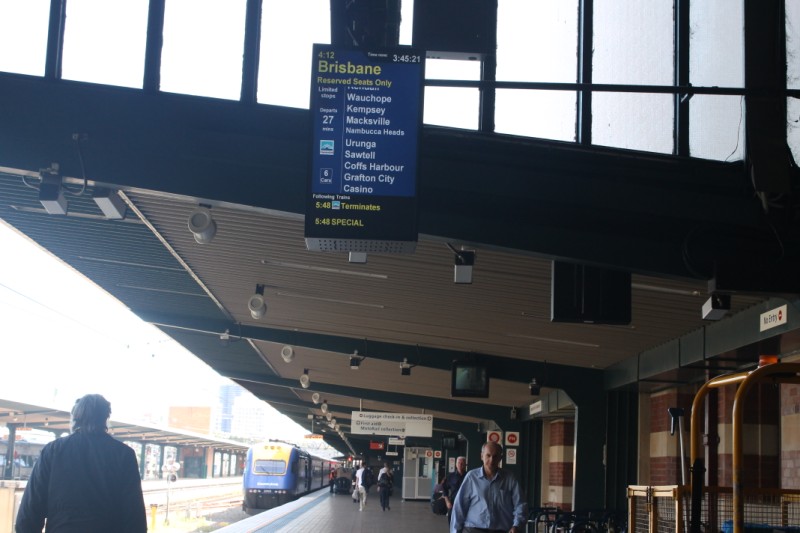 Ah, the joy of an afternoon train! With our newly lightened bags we took a leisurely stroll into Central Station, quickly grabbing some reading material and a final good coffee before making our way onto the platform. The train left right on time, without much to report at the station except for a lonely Santa with a brown beard. As we passed the suburbs of Sydney for the last time and onto the towns of Hornsby and Fassifern, we felt the humidity rise as we entered an area full of lakes and swampy areas.

There were also glimpses of Australian Pelicans flying in formation above the water. I decided that Nick Cave’s rendition of ‘Muddy Water’ would be an apt song to accompany the landscape rolling by, which subequently turned into a marathon listening session as Anna and I shared a pair of headphones, choosing songs that fit our mood and surroundings until long into the night. 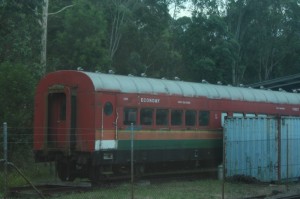 At Maitland, we passed a grain depot site (one I was familiar with from my time with the wheat pricing), and also saw a large collection of shipping containers repurposed as storage sheds and offices. A little further on, the train slowed down as we approached an old railway car being renovated by a local rail enthusiasts’ society, and small home plots with burning bonfires that sizzled against the endless stretches of bush. As dusk set in we spotted mobs of kangaroos feasting on rail-side fields, seemingly undeterred by the train. As people began to settle in for the night, I plugged in my headphones and listened to Arcade Fire while the fields rolled on into the descending darkness… 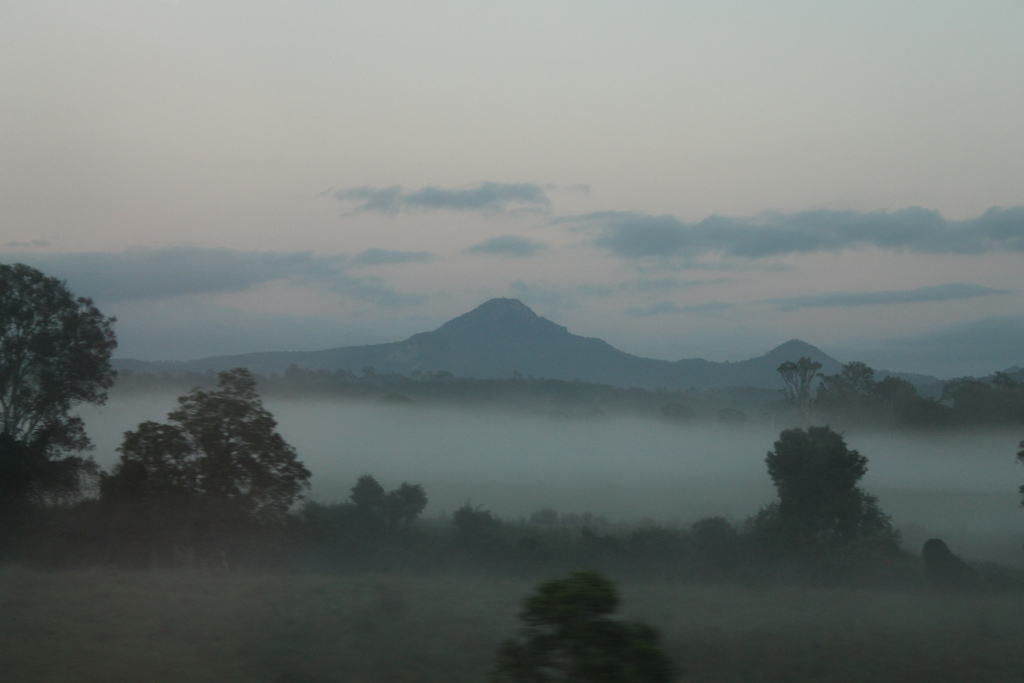 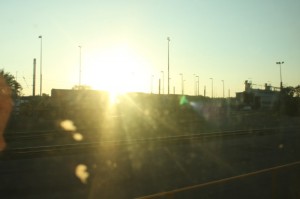 The following morning aboard the train was brief – after a night of little sleep (ironically, a man in our carriage was thrown off the train and arrested at 4am for drunkenly singing ‘Silent Night’ at the top of his voice), we woke up with the rising sun to see the misty pastures of Queensland glowing yellow. We were able to digest a very quick round of raisin toast and a coffee before the train pulled in at Brisbane central at 5.30 am. The toast gave us just enough energy to haul all our bags off the train and get to the nearby YHA Brisbane Central where we would wait it out for the two days we had before our freighter was due to dock in port.