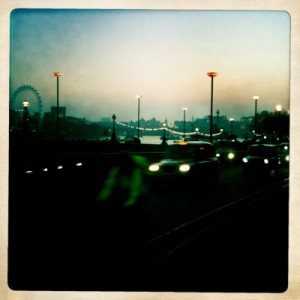 After nearly six years of living/working in London, the daily northern line commute/high speed pace of everyday life had started to grate.

Much as I love London, I had begun to feel like I was seeing more of the underground and office than anywhere else and had noticeably started to adopt the corpse-like pallor and slightly awkward/hunched posture of the 9-?

commuter, used to putting their head down, elbows out and headphones in. This in combination with finding my first grey hairs was making me feel slightly older than my 27 years.

I was lucky enough to really like the place I worked for (a fantastic environmental publisher) but after its independence was sold to the highest bidder earlier in the year, I saw an opportunity to change things, to swap the rapid for a considerably slower place of life. So the upshot is that we’re going to travel around the world without taking a plane, embracing slow (and hopefully low carbon) travel and rejecting a life where everything must be done immediately. There’ll be long (blissful?) periods at sea with no email contact but I will get over my temporary technophobia enough to update this blog every now and again for anyone interested in what we’re doing.

It is now very, very difficult to ignore the links between climate change and travel and nearly all main stream travel guides provide sections on this (some more hidden than others). Lonely Planet now includes a  small boxed section in each of its books which says:

‘Climate Change is a serious threat to the ecosystems that humans rely upon, and air travel is the fastest- growing contributor to the problem. Lonely Planet regards travel, overall, as a global benefit, but believes we all have a responsibility to limit our personal impact on global warming’.

It then goes on to highlight further the impact that flying in particular has on upon our environment:

‘Pretty much every motor travel generate CO2 (the main cause of human-induced climate change) but planes are by far and away the worst offenders, not just because of the sheer distances they allow us to travel, but because they release greenhouse gases high into the atmosphere. The statistics are frightening: two people taking a return flight between Europe and the US will contribute as much to climate change as an average households gas and electricity consumption over a whole year’.

We are not going to pretend that boats are much better (unless you’re getting on a cargo ship/sailing the seas in a small boat). George Monbiot for one has highlighted that luxury cruise travel is hugely emitting and the tonnes of carbon dioxide produced on a transatlantic voyage per passenger are comparable to taking a flight. However, the one big difference between these two modes of transport is that a boat takes seven days to reach its destination, whereas a plane can complete the journey and back again seven times in the same period, ultimately carrying around the same number of people in total as the boat on its one journey. A boat can also allow you to stop off at points along the way, which for a plane would result in a steep increase in emissions due to the fact that a considerable quantity of these are created during take-off and landing (which is why long haul flights are ironically better for the environment per mile than short haul).  Although we will ultimately be covering more miles on this trip by slow train than by boat (hopefully reducing our overall carbon emissions), we are aware that travelling the world was always going to result in higher emissions than holidaying within the UK or Europe by train. We are viewing this trip as a once in a life time journey and we wanted to be able to experience on that journey the expanse of every passing mile and ultimately to appreciate the distance we have travelled.

3 Responses to About our journey