Beijing and the 798 Arts District 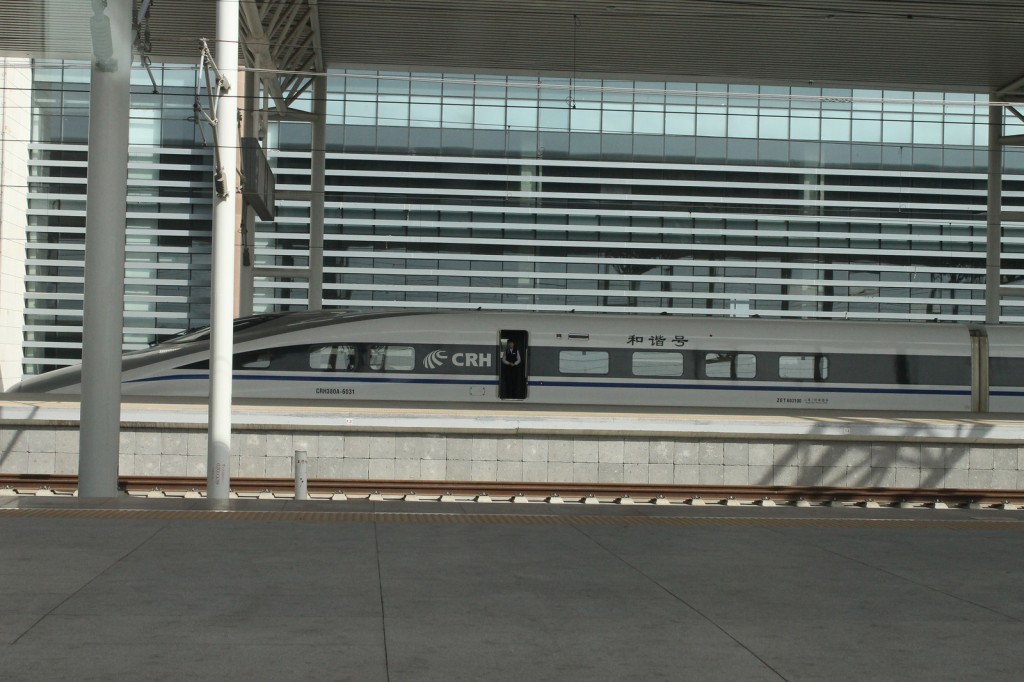 Although we’d already taken the high-speed train for a brief stop-over from Shanghai to Hangzhou, 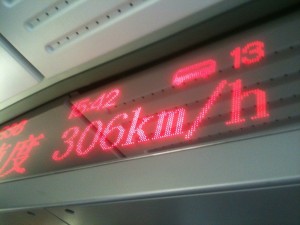 our journey to Beijing would be our first long distance travel on China’s fast expanding high-speed rail network (reported to be the smoothest and fastest train ride in the world). Back in 1990 this same journey would have taken 20 hours or so, but nowadays the high-speed train covers the distance in only 6 while proudly announcing its current speed with a huge red sign below each CTV-emitting television set.

Everything about the train oozed that 90′s vision of space-age chrome and glass, made even more 90′s in essence by Jackie Chan punctuating the news broadcasts flashing up on the carriage’s TV screens to announce his latest tiger-saving project with some Kung-fu moves. 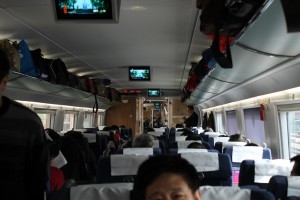 The first few hours were relatively relaxed with passengers reading newspapers, working on laptops or watching other screens but it wasn’t long before the smells from the dining car wafted their way through to our carriage causing a mass exodus to the heart of the train where a rapid-fire service of microwaved rice, meat and sauce was taking place (don’t try and ask for the vegetarian option unless you are the type who enjoys sowing chaos and confusion). The food was unexceptional but tasty and more importantly, given our general state of health at this point, packed full of microwaved oils and vitamins.

Our train from Shanghai arrived at Beijing in the late afternoon where we managed to find a cab to drive us to the happily-named Sunrise hostel, a short walk from the Forbidden city. As we drove away from the station, the sun began to sink, setting the murky haze of the city’s main arteries alight with the fire of a million headlights. The honking cars, bicycles, carts and masses of people pouring out of office buildings made a stark contrast to the clinical and calm surrounds that we’d just spent the last 6 hours in. 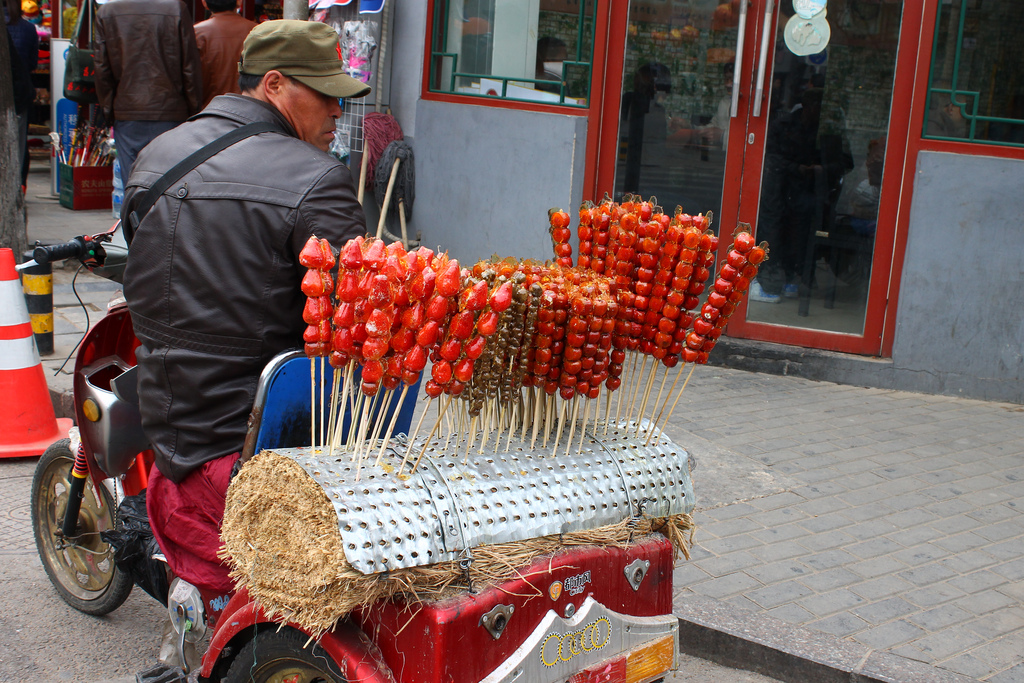 The following morning, we had an early start as we had decided to join a group from the hostel who had hired a mini-bus to Mutianyu, a popular segment of the Great Wall that has been restored and geared up to tourists. 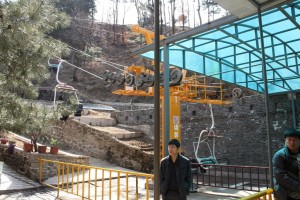 The two hour journey there was uneventful but one of the team from the hostel animatedly warned us not to lose heart over the Disneyland-esque entrance to the wall as once we were up there, we didn’t have to ‘stick with the crowds’. It didn’t take long to understand what he meant – we were greeted by crowded tourist market selling over-priced tourist gifts and refreshments (and various photographic opportunites – most oddly perhaps, involved posing with a camel). This soon gave way to a brightly coloured cable car which lifted the tourists who didn’t fancy the climbing the stairs up to the top. The cars passed over a giant toboggan slide which allows visitors to whizz back down from the wall the fast way when they’ve finished. We could now see why the word ‘theme park’ had been used so many times in connection to the wall. 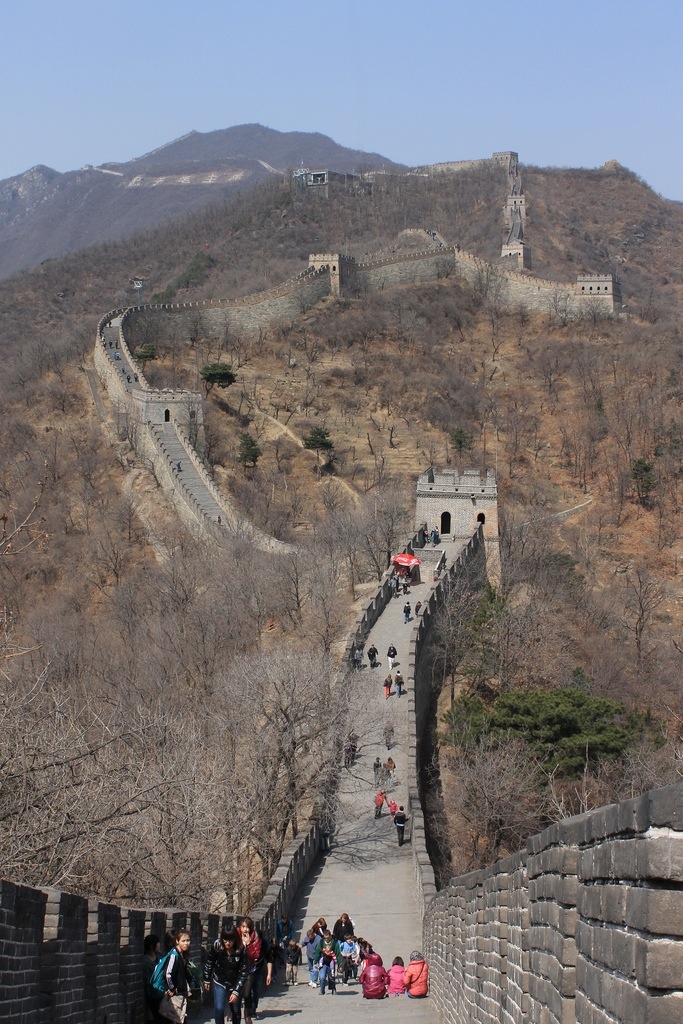 What isn’t made explicit in any of the ‘info guides’ is that most of this stretch of the wall has been entirely reconstructed – in that it has been completely re-built with new stone over the original (a common theme in China, as it turned out). One of the guys from our hostel reminded us of what our guide had said on the way here and suggested we walked along the wall to point 1 where the new construction ended and we could see paths of trees and overgrown shrubbery stretching beyond. 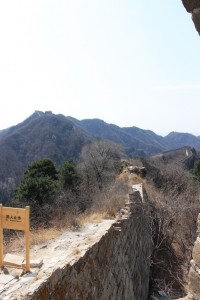 After a long climb up some very steep steps, we came to see what he meant – through a window of the last watch-tower was sign labelled ‘Dangerous, Do Not Enter!’, which he beckoned us towards… “This”, he said proudly, “is the old ‘disrepaired’ wall and is still an unofficial walking route for the adventurous. Just follow the scrubland and you’ll soon be among the eagles”.  With a quick glance behind us we took off along the path and were soon completely alone on the crumbling remains of a magnificent stretch of wall. Though it wasn’t obvious from where we had joined the wall, we could now see that we were in the middle of a mountain range dotted with sections of old wall and small stone-built forts that had been slowly overgrown by shrubs and trees over the years. Looking eastwards towards the snow-capped mountains, we could clearly see it snaking onwards into obscurity, circled over by eagles whose calls echoed between the peaks. 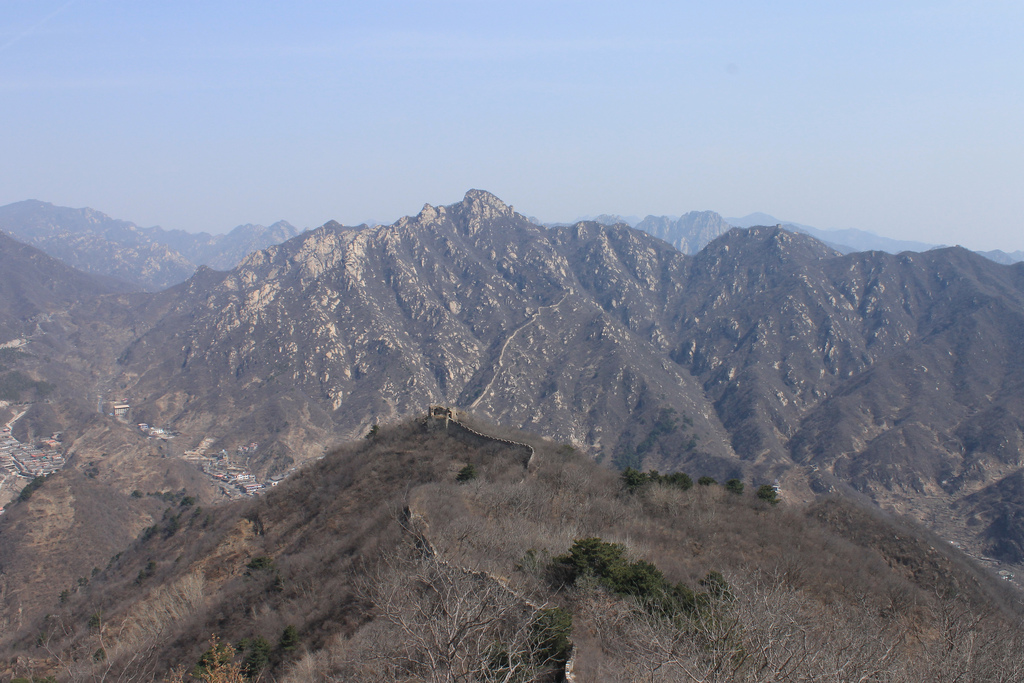 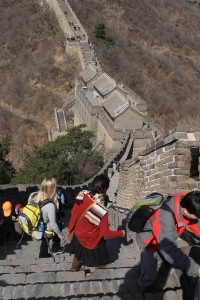 After a wonderful hour spent amongst the crumbling stone, we traced our steps back, descended the almost vertical staircase of the reconstructed wall and re-joined our group for a late lunch in one of the tourist outlets. We got talking to a man from Israel who had been working in Shanghai and was now making the most of exploring China before heading home. He asked us if we had yet visited the Arts District 798 in Dashanzi, just outside of the city’s centre, yet – which we hadn’t. “If there’s one thing you do in Beijing, make it that – you won’t be disappointed”. We only had two full days left in Beijing, and on one of those we were due to transfer to a hotel near Beijing central station, from where we were due to catch our train to Mongolia, so we had to make a call on what to see but decided that the arts district was definitely one of them.

The next morning we decided to take a cab to south of the Dàshānziqiáo flyover where the now defunct military warehouses which house the 798 Arts quarter (a sprawling settlement dedicated to freedom of expression comprising of art studios, galleries, bookshops, cafes and stalls) can be found. Factory 798 (as it is also referred to) became an underground arts hub and refuge to Beijing’s contemporary artists who were evicted from their Old Summer Palace residences by the government during the 1980′s. 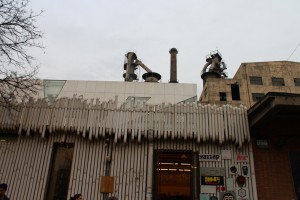 The site of the old factory with its industrial chimneys and sweeping ceiling arches offered inspiration as well as space to those who set up studios there and the area began to grow by word-of-mouth, in time attracting international artists to the area too. Industrial remnants are interspersed with exhibits that make use of materials scavenged from the old factories themselves, while quaint artists’ shops, cafés and residences now occupy the smaller buildings. It is now a fashionable hub of high-profile galleries, catwalks and event spaces for trend-conscious companies. Most of the exhibits are completely free but art can be found around every corner – from carparks to chimney tops – no space is left unadorned. 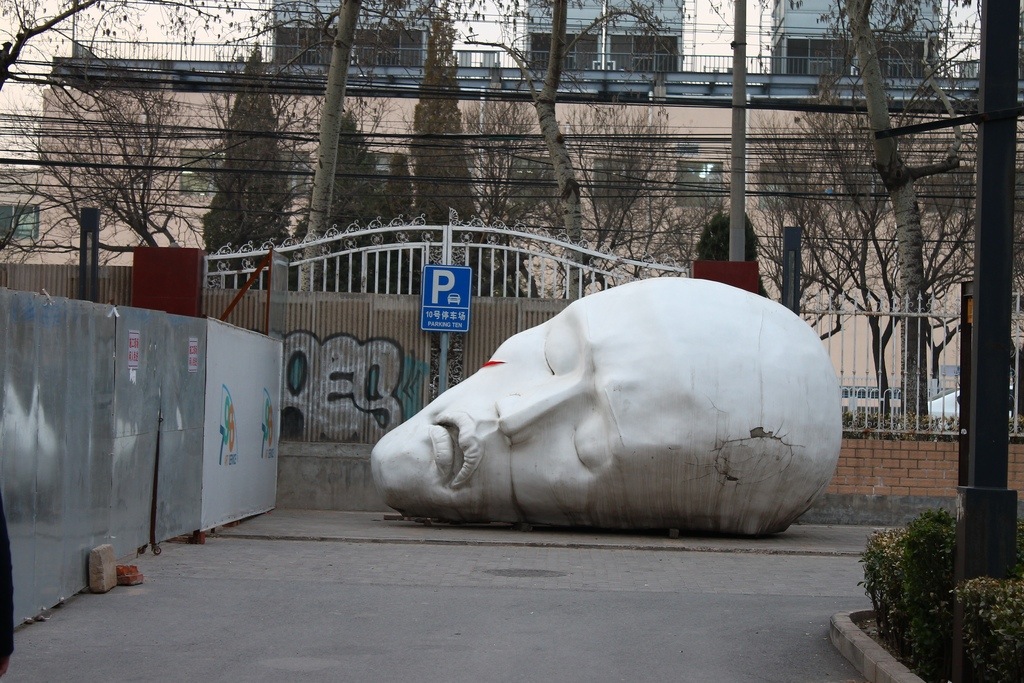 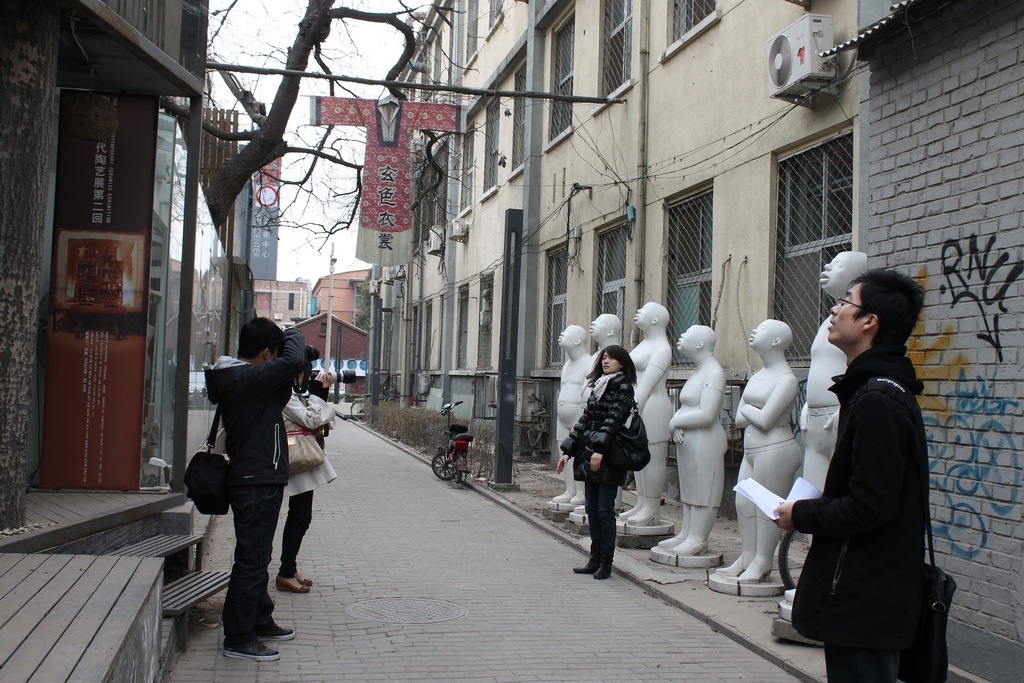 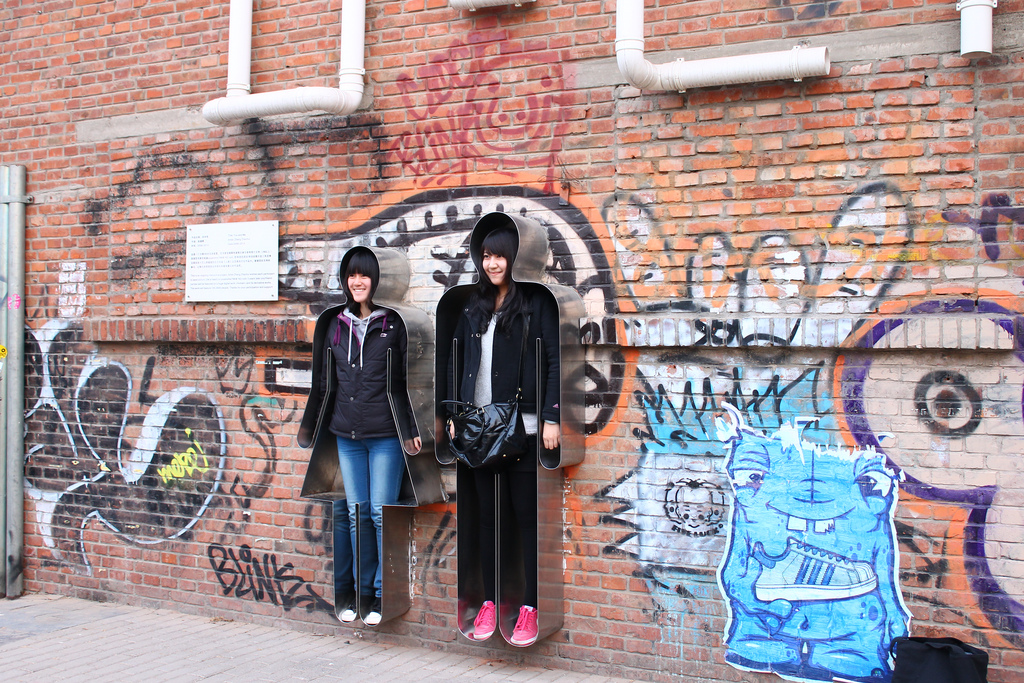 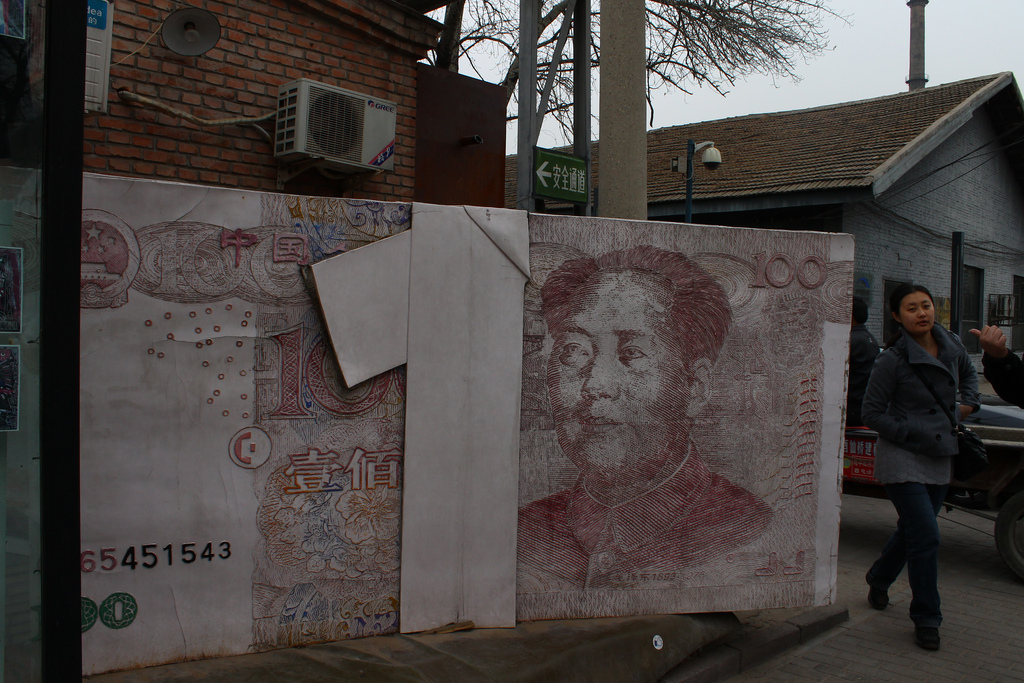 Inside buildings played to host to spotlighting one or two particular artists. One sculptor fashioned subjects that looked as though they were drowning or swimming in a pool of lrippling iquid cast from dark iron. It wasn’t clear if they were winning their battle against the tide, but fittingly for the area, the focus seemed to be in the struggle. 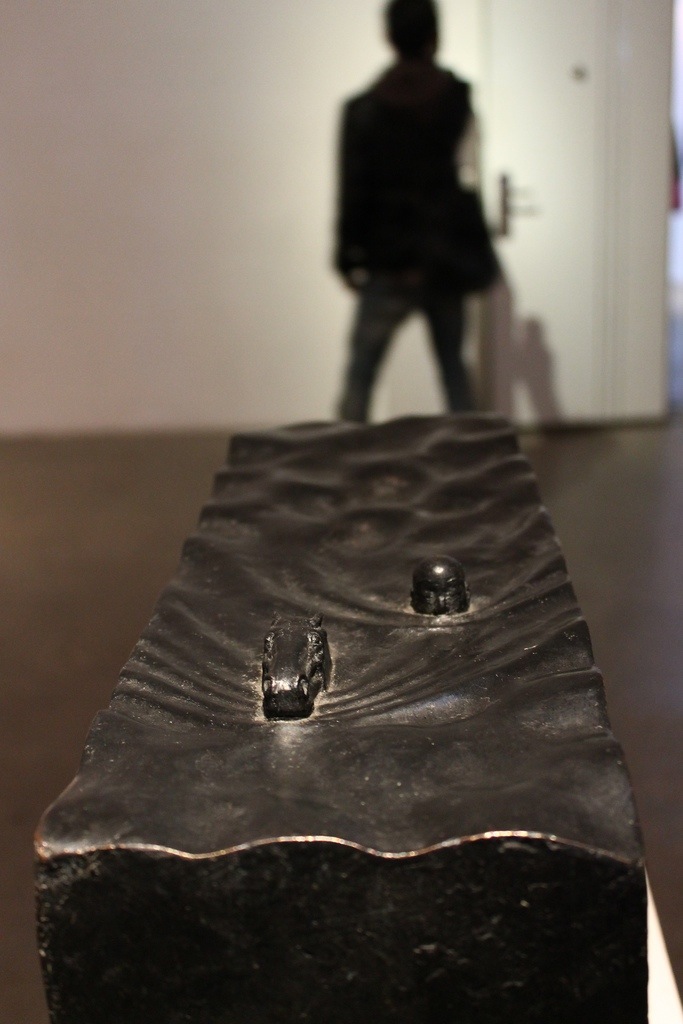 Another exhibition, Bashir Makhoul’s “Enter Ghost, Exit Ghost“, was set out as a maze of confusing holographic pictures, each simultaneously displaying a Middle-Eastern streetscape contrasted with an equivalent one made out of old cardboard boxes, to look like a ghost city. 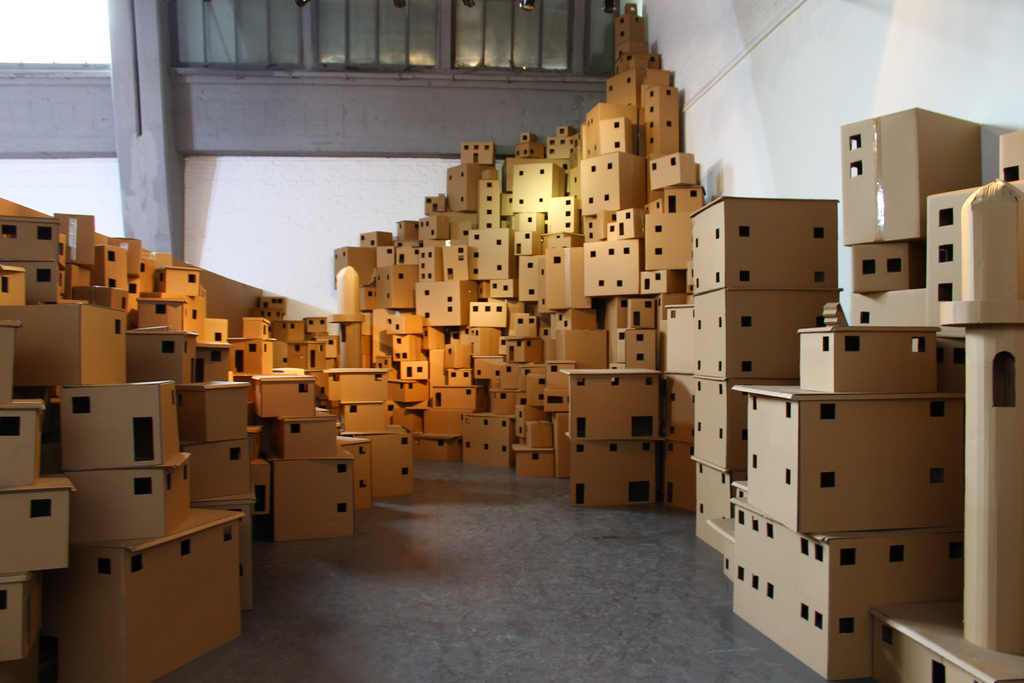 In another brick-interiored industrial outhouse, blown-up photographs were being carefully ignored. I particuarly liked the contrast of this photograph with the group in front inadvertantly mimicking one of the pictures in the gallery, transfixed by their iPhones and tablets instead of the nude woman just behind them. 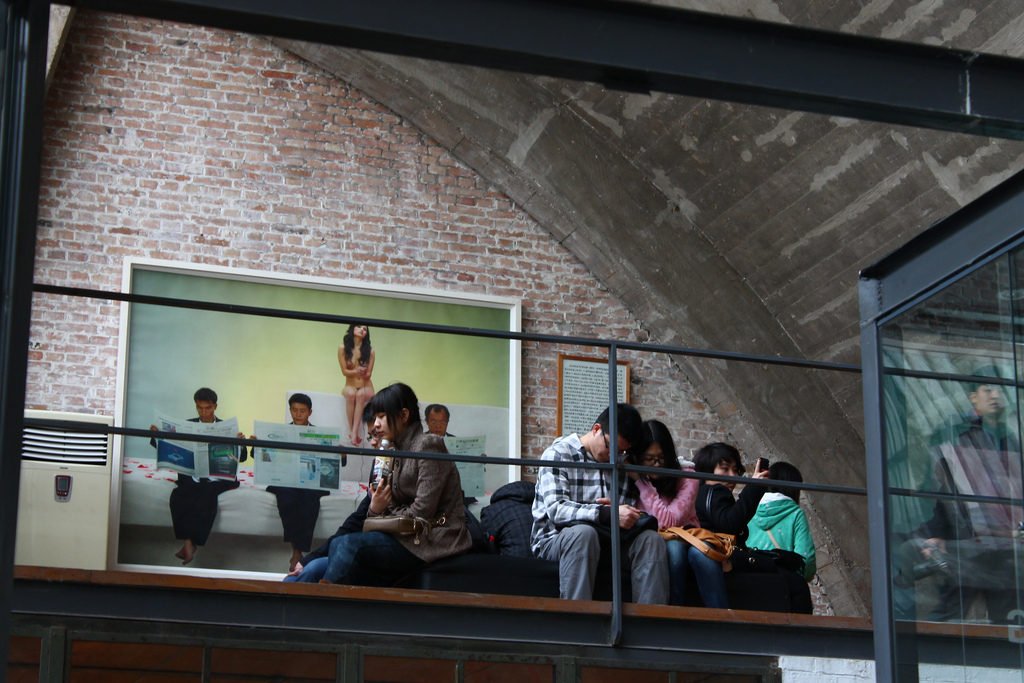 We were completely absorbed by the arts district and only noticed the fading light when the cold started to seep in. Stalls roasting sweet potatoes over a fire had sprung up next to an old steam engine which helped to warm us up. As the temperarture continued to dip, we made our way to the exit, not realising how tired we were until we flopped down in the hostel and slept for a full 13 hours in our clothes. 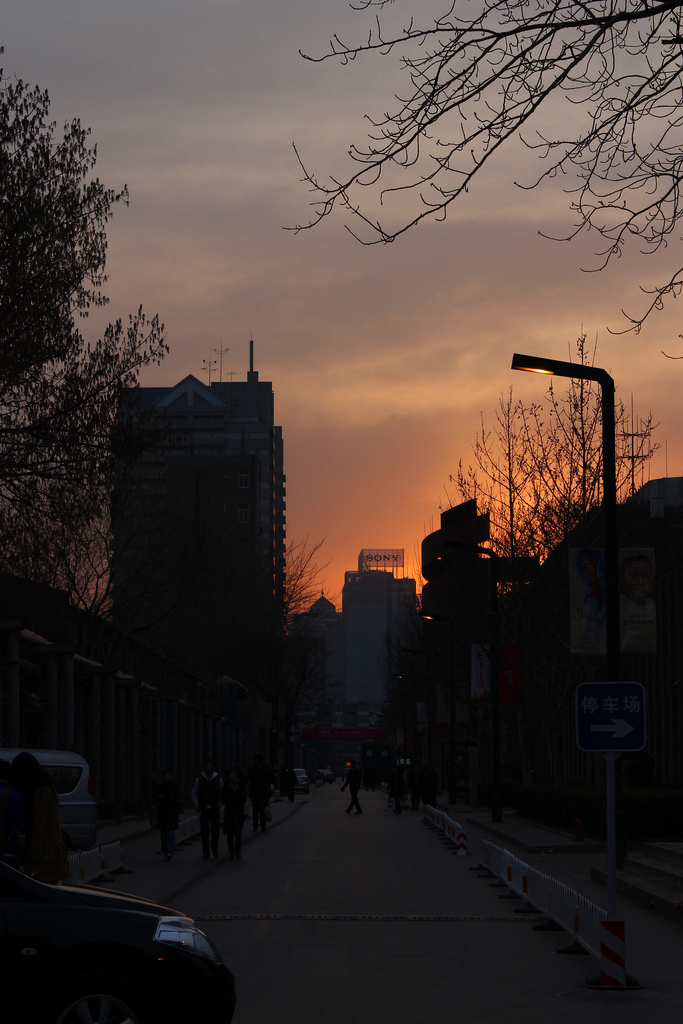 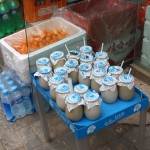 With one day left in Beijing before our departure to the Gobi desert, we decided to get up early to try and beat the crowds to the Forbidden City. It was so cold that the trays of milk drinks we had got used to seeing around the city had frozen tops and the groups of men who were usually outside playing Mahjong and dice were nowhere to be seen. 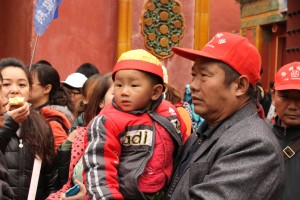 We got to the Forbidden city early, but not early enough to escape the mass of tour groups all colour coded by hats and led by guides carrying large flags and megaphones. We made efforts to avoid the sea of red hats (many clinging onto children dressed as little emperors) and headed to the side rooms instead, which gave us a bit more space to breathe and take in the detail. We spent a lot of time looking around the emperor’s theatre, 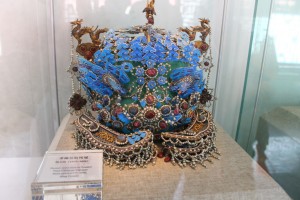 which was still complete with trap doors and a wonderful selection of 1920′s vinyl recordings of the dowager empress’s favourite eunuch troupe. Next we visited the treasury within the Forbidden City, a collection of buildings housing some very extravagant teapots and trinkets including an amethist massage roller, a disgustingly striking headress made of brilliant blue kingfisher feathers, 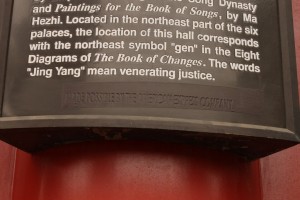 and an incredible golden astrolabe with pearls representing each of the star clusters. If you look closely at the signs outside each building you can see that they many were once upon a time sponsored by a certain American company, which has since been discretely painted over.

After a morning’s exploration of the Forbidden City, we made our way back to our hotel to prepare ourselves for the onwards journey. We could see Beijing’s Central Station, with its mass of crowds, from our 20th floor window and it felt strange, as we watched the people below disperse, to think that this time tomorrow, we’d no longer be in China… 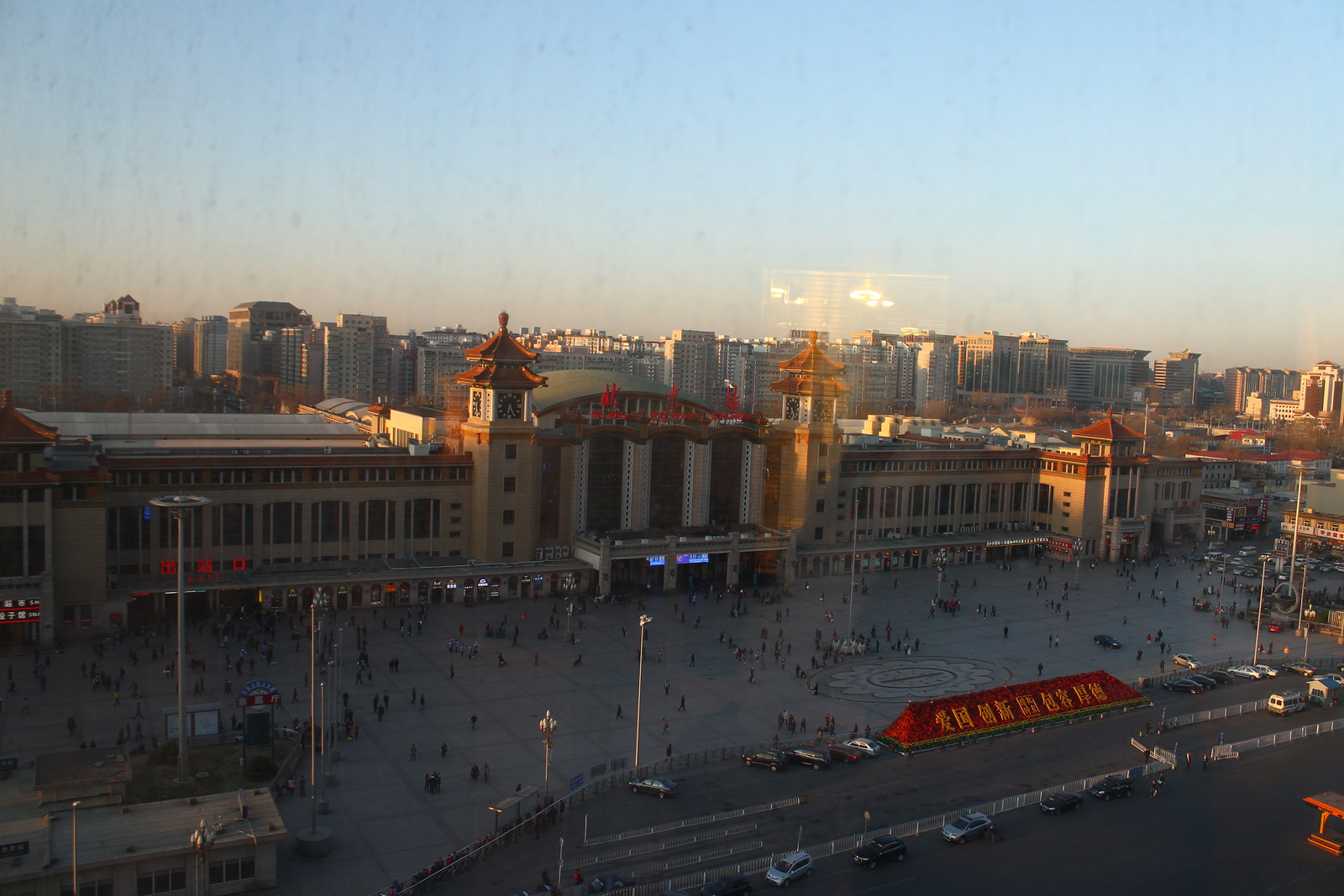