Among the Karst Peaks of Yangshuo, Guanxi Province 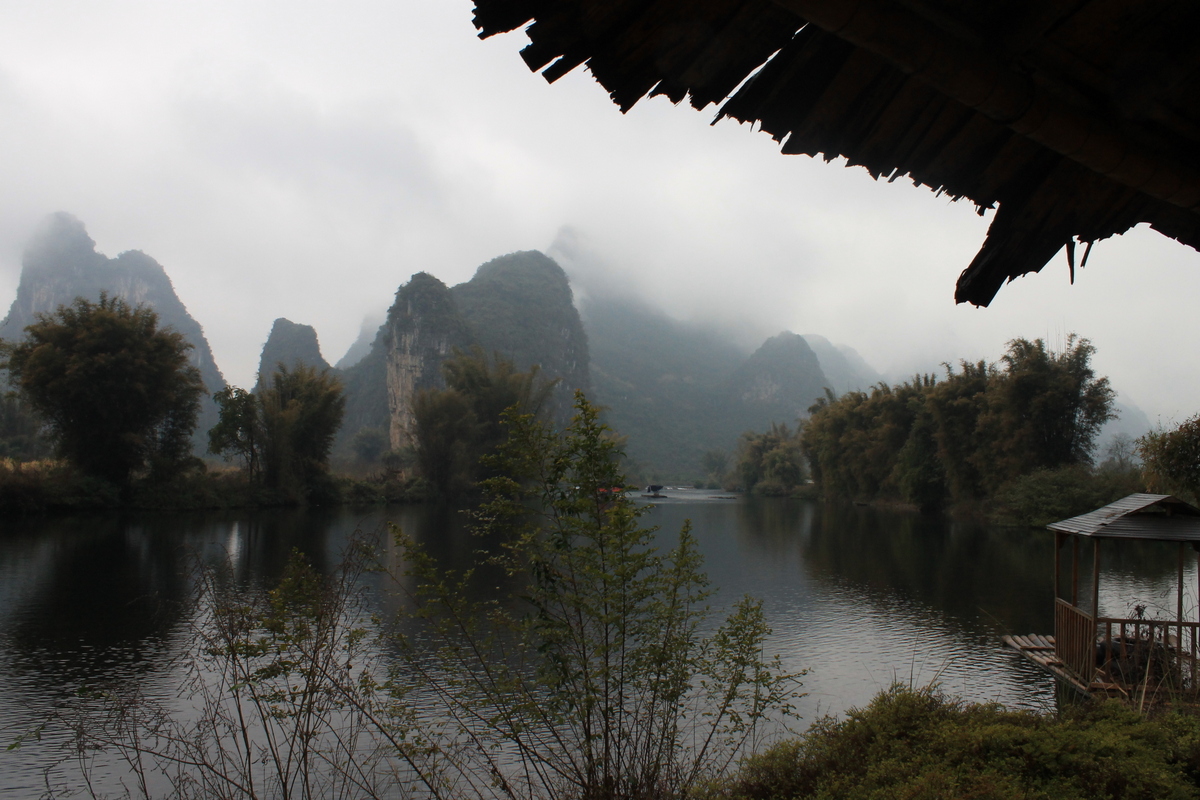 The moment we arrived at the Yangshuo Mountain Retreat, we knew we were somewhere special. We were dropped off by taxi on a deserted, wet mountain road which wound its way through immense karst peaks (irregular limestone formations) that dominated the plains of the valley on either side of us. 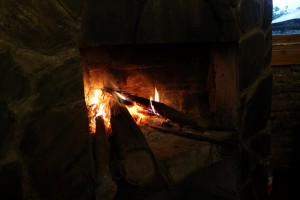 The rain – which had been falling regularly since we arrived – was flowing down the road in snaking streams, heading in the direction of the Yulong river which flowed just below us, at the foot of the retreat’s garden. We were later told that it’s not unusual for the garden to become flooded after heavy rainfall and there were a number of kayaks lined up against the wall to help staff and guests get about if it did. Although the river was raging, it hadn’t yet swallowed up the garden and so we followed the signs and made our way along the garden path to a very warm welcome – a roaring fire, home made biscuits and a pot of hot ginger tea. All thoughts of the damp, darkening mountainscape forgotten, we settled in for the night with a hot shower and a comfy bed, looking forward to tomorrow’s explorations.

After a very restful night, we awoke to the sound of rain splattering on corrugated iron rooftops. This combined with cool mists is apparently what makes Yangshuo so good for growing pomelos, persimmons (best eaten sundried), chestnuts and oranges (Ponkans) which are the feature ingredients of many local dishes. 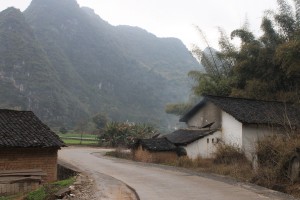 That morning the rain only lasted for an hour before easing off, leaving us free to go for a misty walk across the flood plain. Yangshuo is best explored by bike but we decided to follow the narrow path, which led from the Mountain retreat to the Yulong Bridge, on foot. The journey would take us along the Yulong river and through the local villages of Yima, Xiatang, Xinglong and Jiuxian. The map we were given marked all the villages, bridges and settlements of the area – some with fantastic names such as: “Two Lions Playing a Ball”; “Frog Crossing River”; “Elephant Out and Horse in a Cave”; “Lion Watching Nice Horses”; “Lion Riding on a Carp” and “Grandpa Guarding the Apple”. With our first marker (Tortoise Probe Head) in mind, and map in hand, we set off for the day. 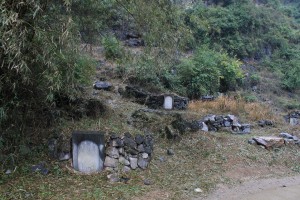 The air was cold and damp, and the a grey mist obscured the tops of the huge karst peaks which towered all around us. The Chinese believe that spirits inhabit these mountains and groups of family graves can be found clustered around their bases – the silence soon became almost eerie, broken only by the occassional passing of a truck, carrying bamboo rafts from the town back to their base further up the river. After about half an hour we passed a farmer leading two buffalo along the road; he didn’t seem in a hurry and was happy to let them eat and pause as they saw fit. We came to associate patience with the Chinese here, especially when we later attempted a calligraphy class and a two-hour tea ceremony where we learned the importance of getting the minute details right! 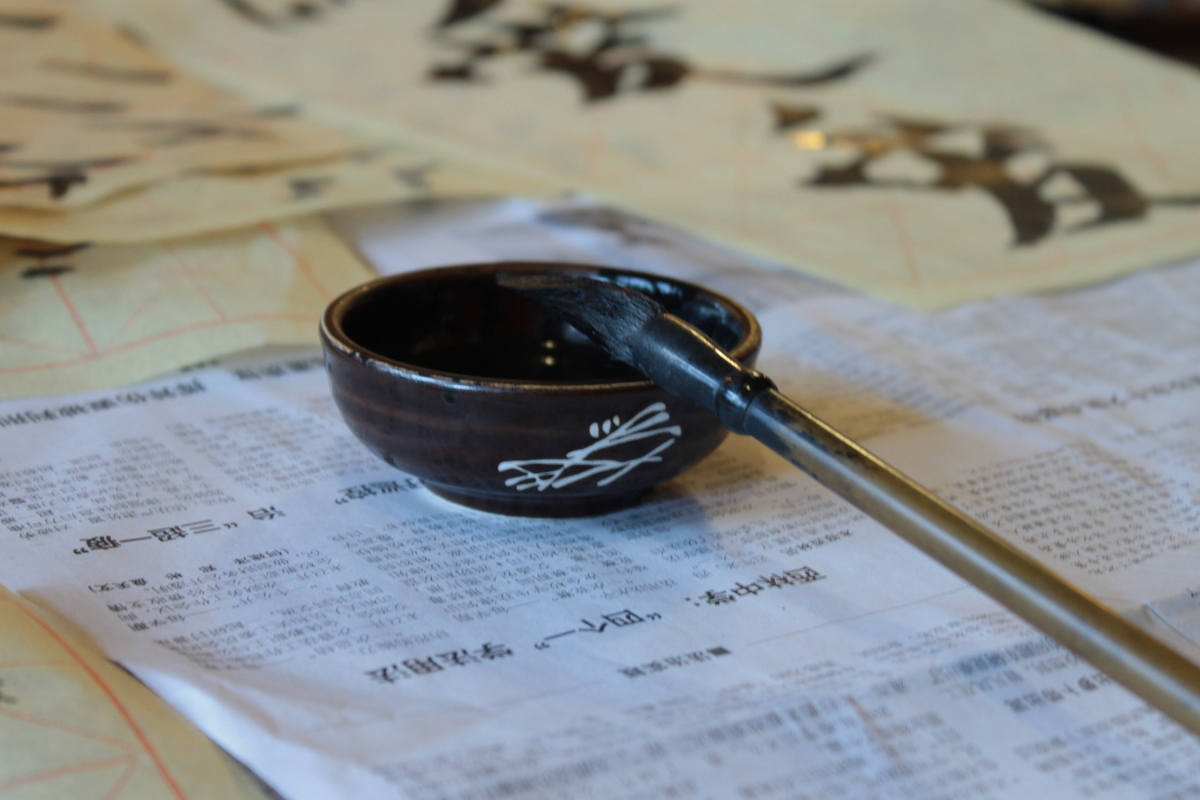 The scenery was beautiful with an aura of the sublime and the timeless. 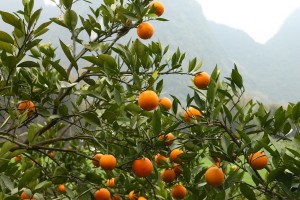 Orange trees grew along either side of the path, surrounded by small settlements of Qing dynasty houses and sheds where chickens roamed and children played. Some of the children ran alongside us and waved, others were disinterested but everybody seemed quietly but intensely focused on whatever they were doing, even if it was sitting on a hay bale staring at the mountain peaks. After about an hour of walking past quiet and almost deserted buildings, we saw signs for the “Outside Inn”, which someone at the retreat had told us was the first countryside accommodation for foreigners that opened in the area. 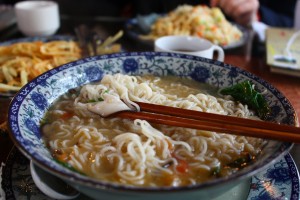 Luckily for us, it was just opening for the season and was serving lunch, aided by some very necessary heaters. To find it, we left the path onwards and took a small winding track through a rural village until we reached the inn. The food was good and just what we needed before heading back into the cold and onto the path leadaing to the historic Chaoyang village, which has so far foregone the touches of modernisation which are quickly sweeping other parts of China. Standing amidst the chickens, crumbling stone, drying beans and red painted walls of this wonderful place remains a stand out memory of the trip, perhaps best illustrated in photographs: 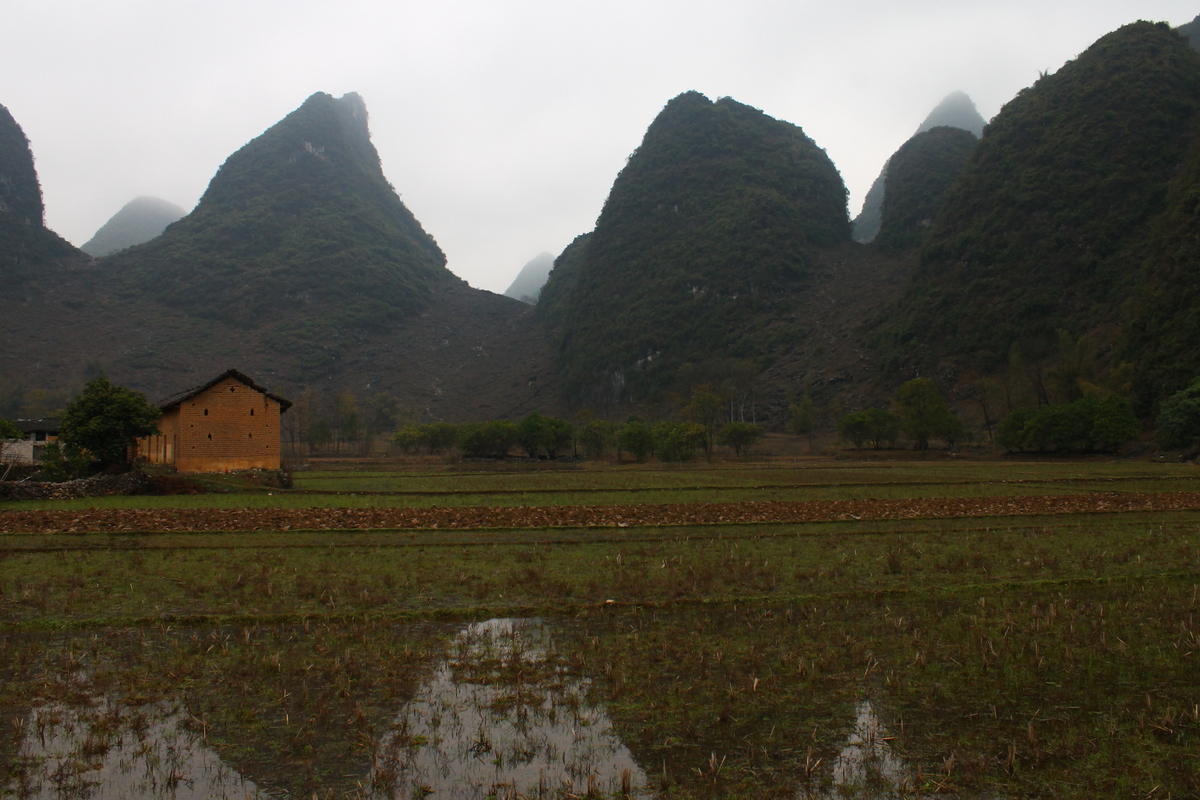 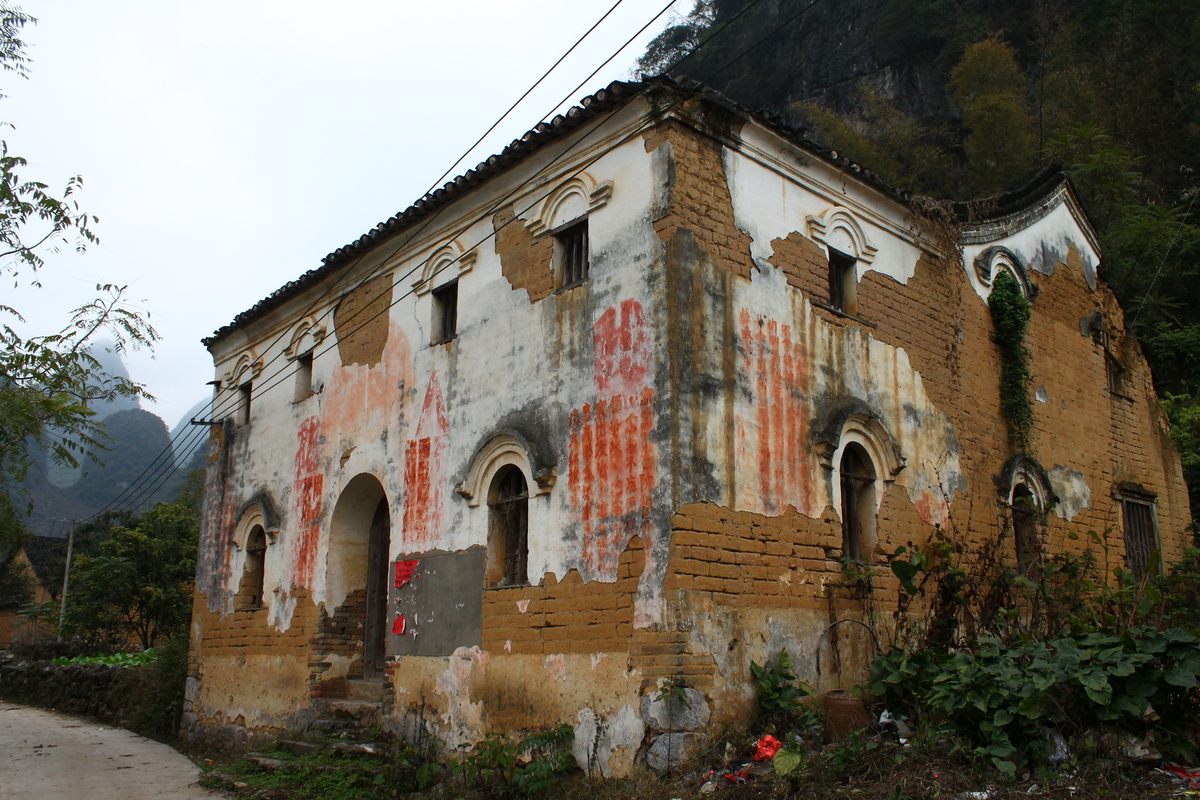 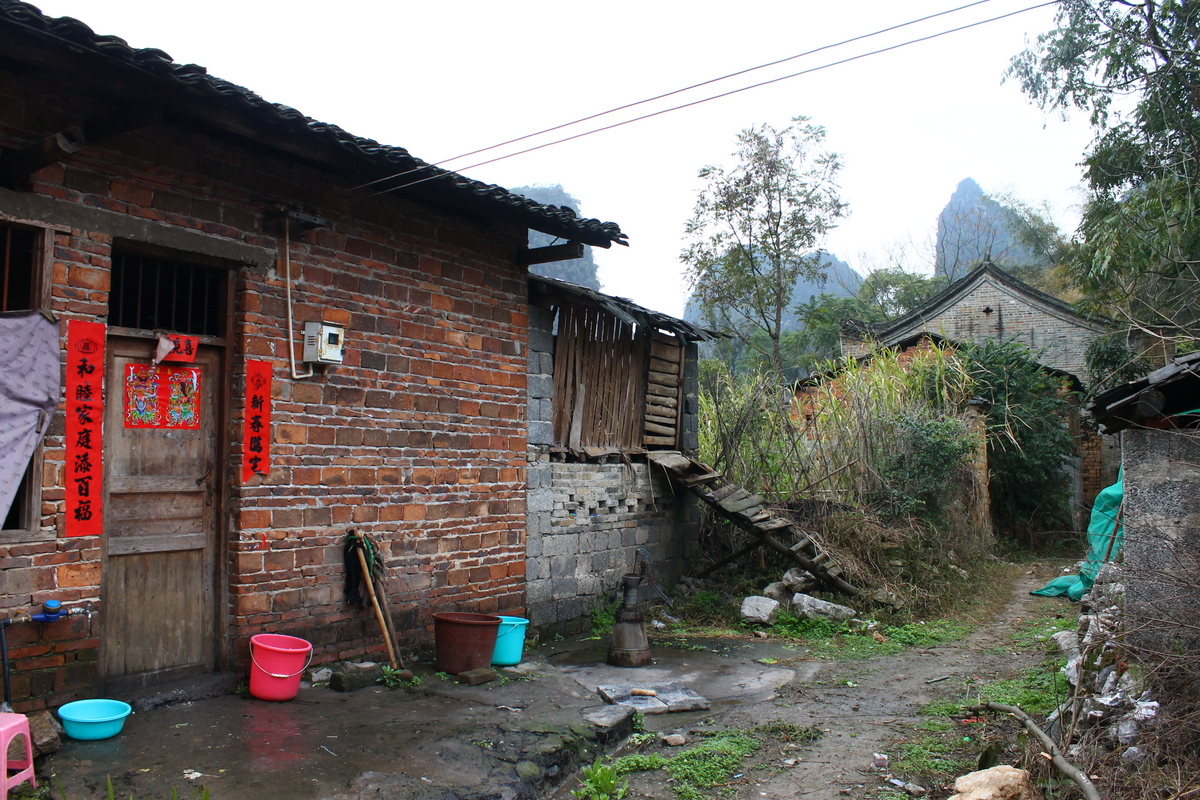 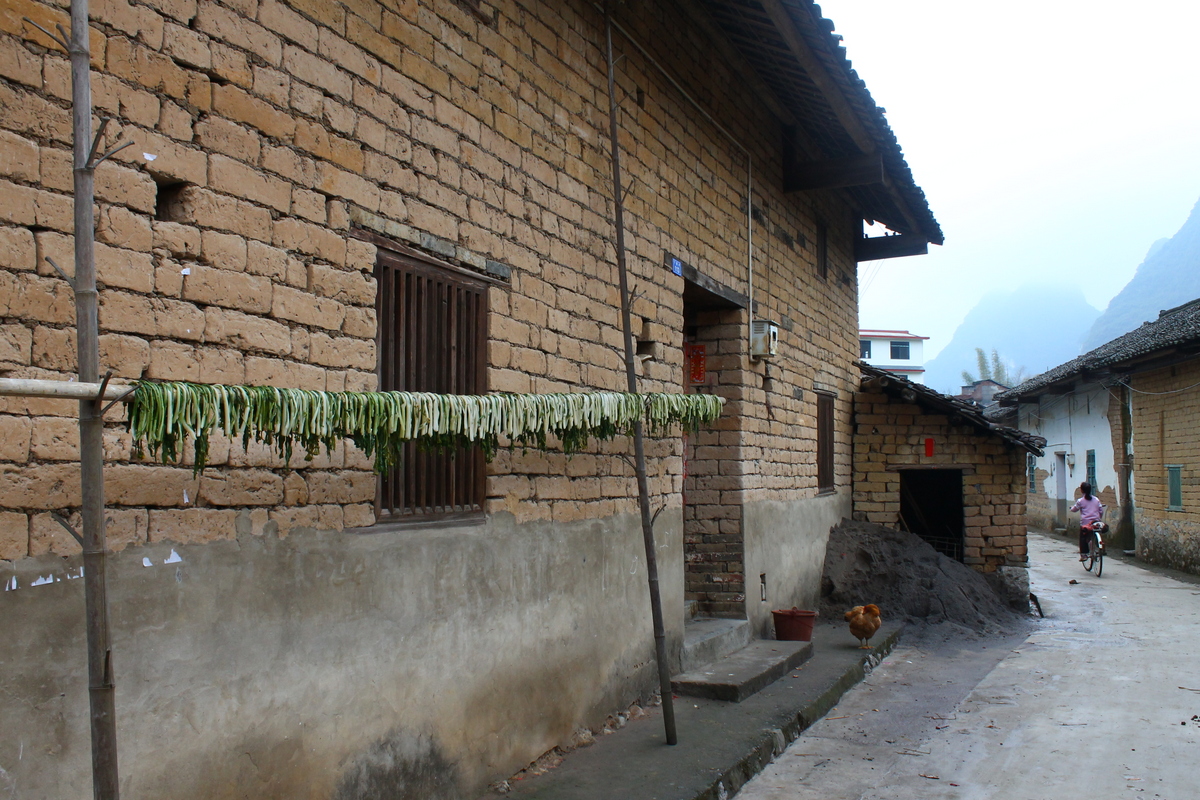 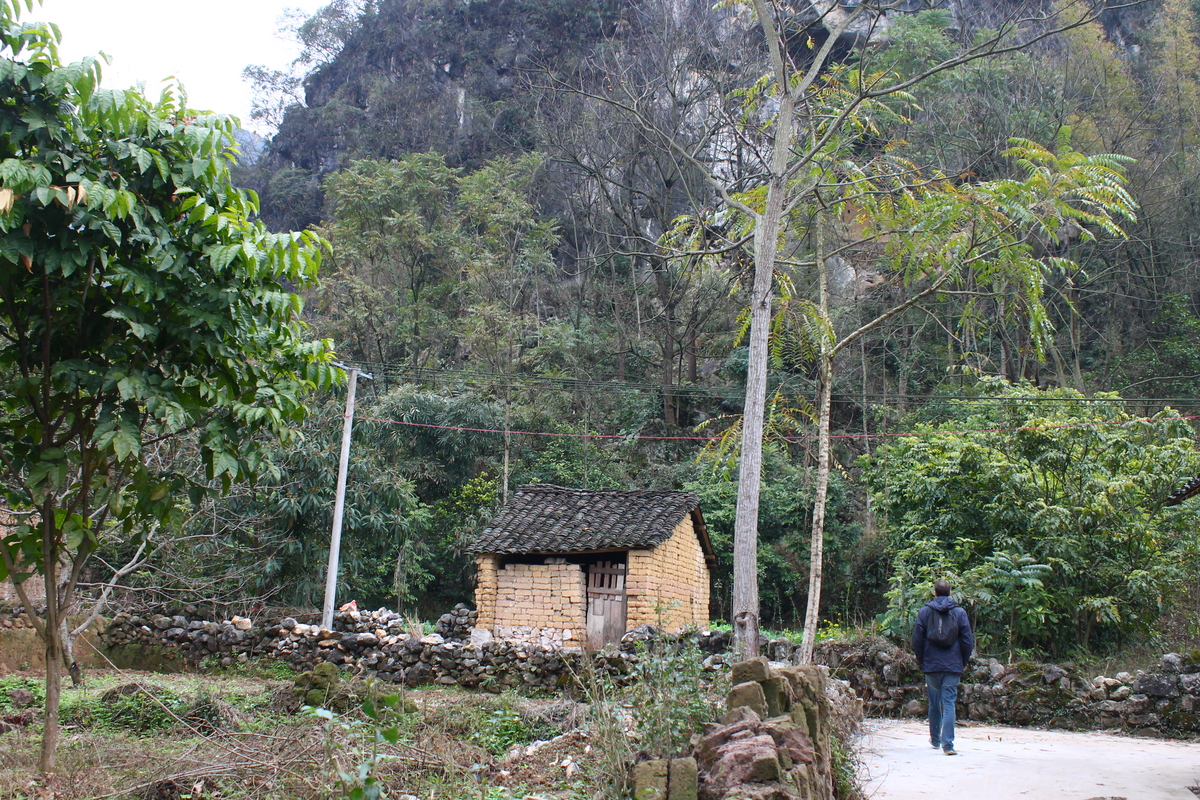 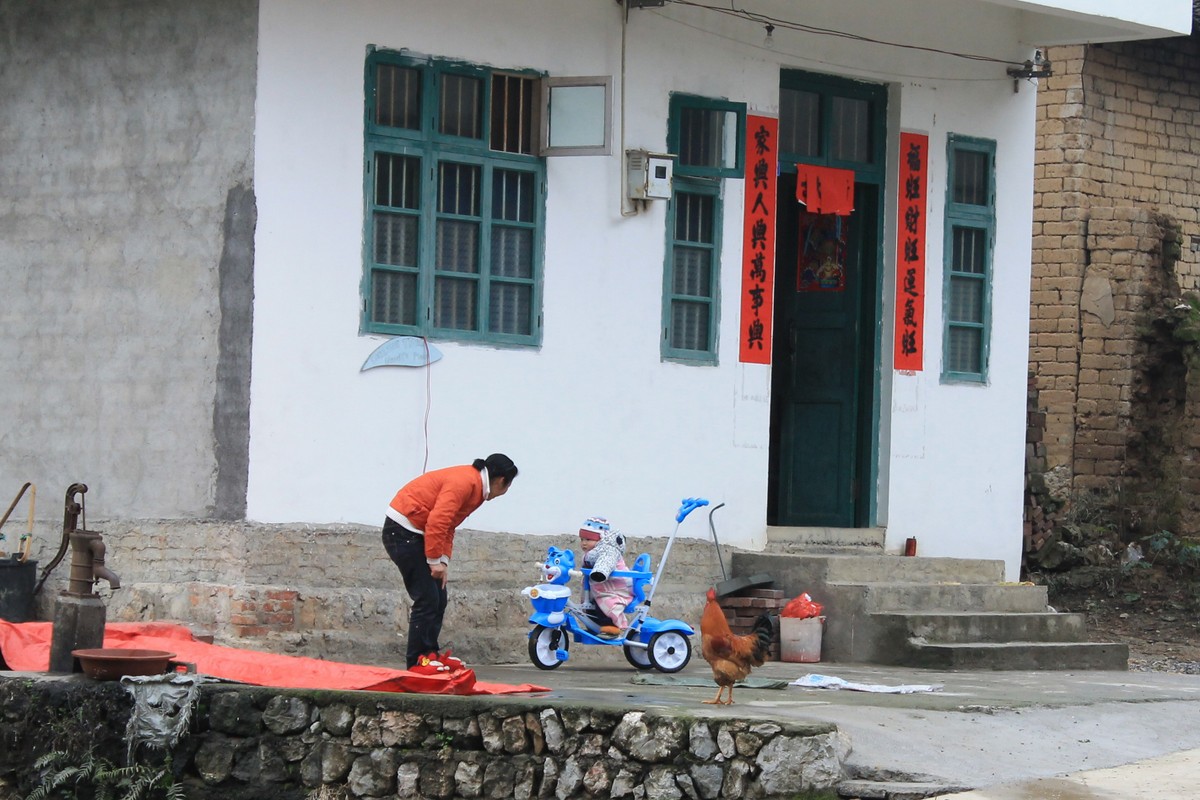 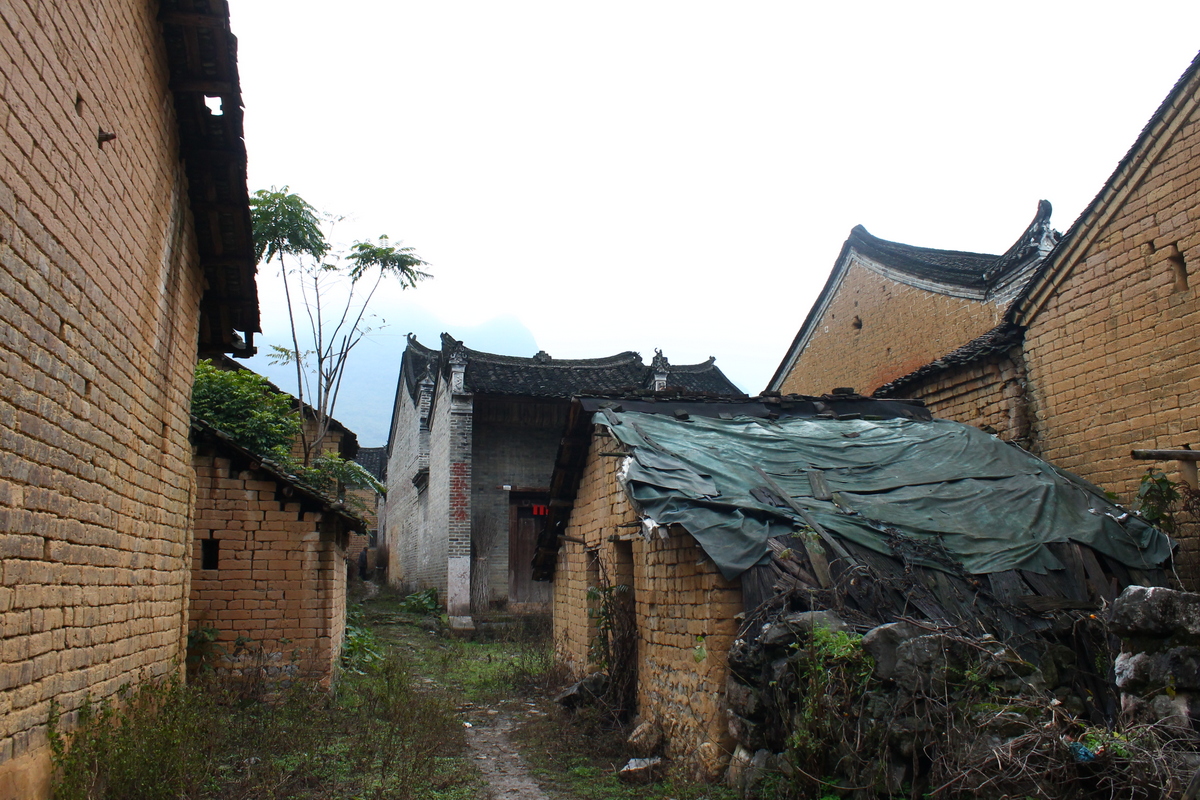 After spending an hour or so exploring the nooks and crannies of the village, the overcast skies had already begun to darken. Evening was setting in and the temperature was dropping fast. Not relishing the thought of walking all the way back, we took out the map and identified a rafting station marked not too far away, near the Xi’angui Bridge. 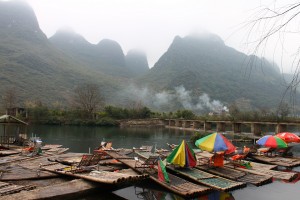 It wasn’t yet warm enough for tourist season and so most of the rafts were tied together next to piles of faded umbrellas unceremoniously lying in the mud. A couple of touts came up to us saying ‘ride?’ and after a bit of thought we negotiated with one family who agreed to take us down the river and back to the retreat (or so we thought) if we paid upfront…

The river was almost as still as a mill pond – everything seemed frozen in the icy mist which was fast descending, infiltrated only now and again by a diving water bird. 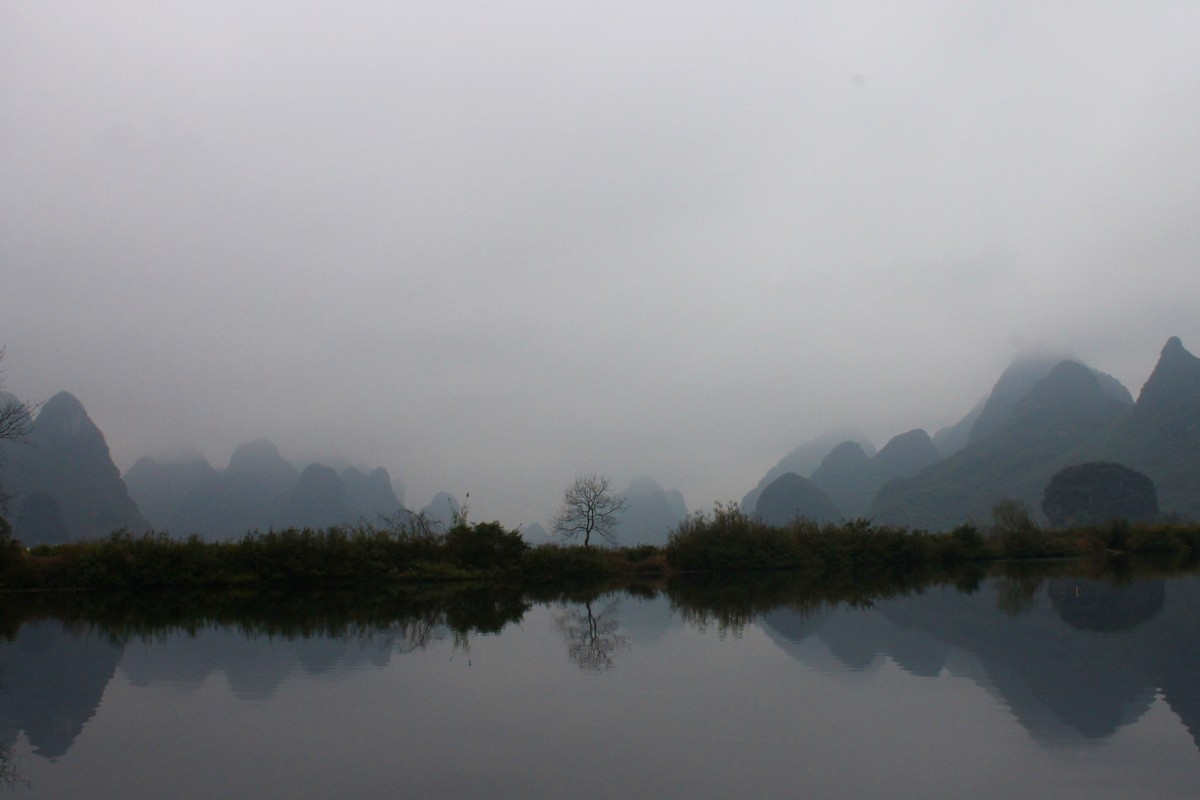 It wasn’t long before we reached the first of the rocky dams which punctuate this stretch of the Yulong river. Unfortunately, our raft became stuck and our oarsman, the man who was supposed to be guiding it, began to sway and shout. 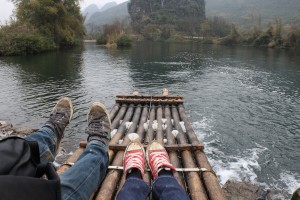 As he did, we were greeted by strong alcohol fumes and we soon realised that he had probably spent the afternoon drinking in the local café along with the other rafters lying in wait in vain for people stupid enough to want a raft ride in this weather. Not wanting to fall into the freezing river, we lifted our feet up in the air as he jumped onto a rock and began to push the raft roughly down the small drop. At the last moment he jumped back on, submerging all of the raft, bar the slightly elevated seat we were huddling on. Twenty minutes and two more stone dams later, the oarsman had run out of energy (perhaps the hangover was starting to kick in) and made a quick phone call, which resulted in further shouting. 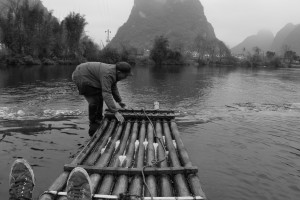 Before we knew what was happening, we were heading for the banks of a field where we were essentially pushed off the raft and left in the hands of a confused looking farmer. He started speaking to us in Chinese before running off through the winter-hardened field. We reluctantly followed where he was waiting for us with a hay cart, pulled by a buffalo, that was just about to leave. Whether it was the cold, or the thought of shivering all the way home on the back of a shonky looking hay cart, I got pretty angry. The poor guy suddenly looked quite frightened and ran off again, this time returning with a motorbike which he patted the seat of. We both managed to squeeze on the back and were soon whizzing through the darkening karst peaks and scarily icy roads back towards the hotel. I was too cold to be frightened and just concentrated on clinging on to his coat with my numb fingers. A few swerves and curves later and we were back outside the retreat, where we thanked the farmer (who was really blameless in it all) before quickly running inside to thaw out by the fire with a big pot of hot ginger tea. 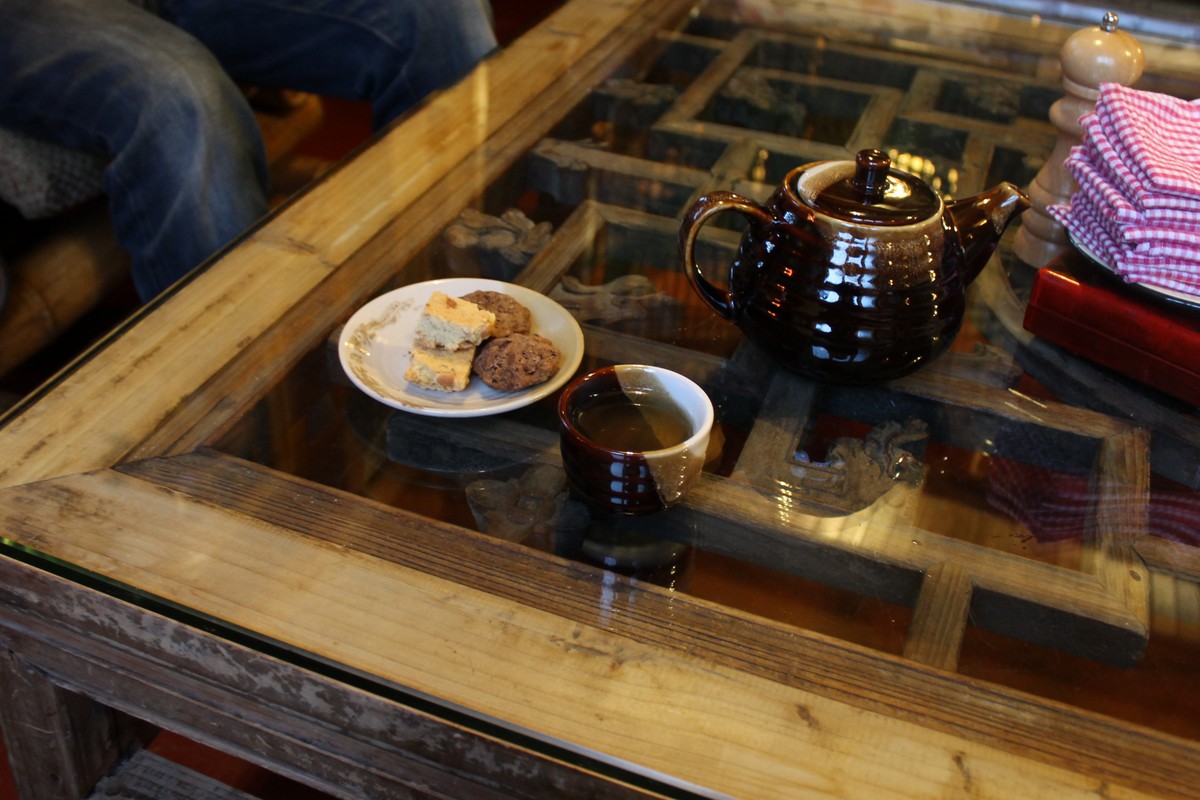 Tweet
This entry was posted in Travel and tagged China, the mountain retreat, Yangshuo. Bookmark the permalink.

3 Responses to Among the Karst Peaks of Yangshuo, Guanxi Province