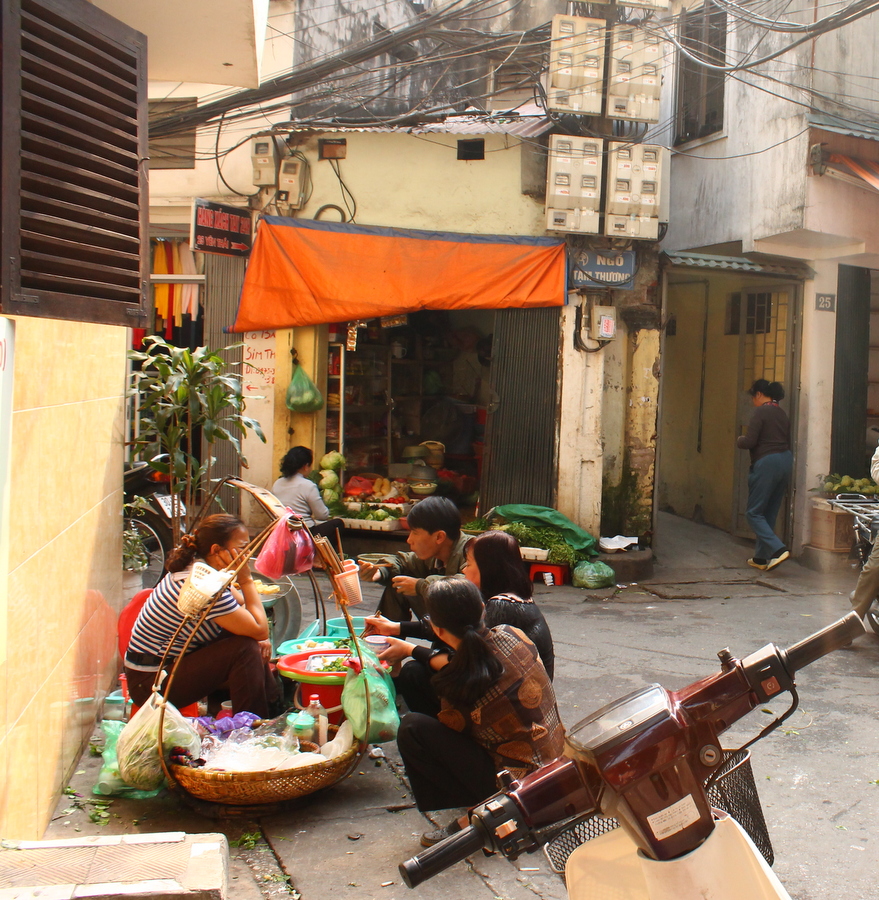 We stepped off the train in Hanoi at 5am in the morning and were greeted by the chill of a misty platform which was quickly filling up with taxi and tuk-tuk drivers. We had been advised to always go with one of the green and white Mai Linh taxis because they were the least corrupt but as all of those had been snapped up we had no choice but to trust another metered cab. 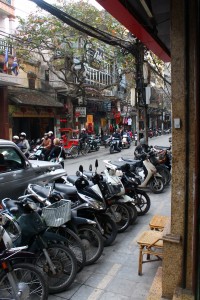 We soon realised that this was most definitely a mistake when we noticed that the meter was bounding up by handfuls of Vietnamese Dong a second. The taxi driver had apparently gone deaf by this stage and could not hear us pointing this out; a few notches up the volume scale later and he screeched the car to a halt to argue. Hanoi was still deserted at this hour and not having a clue where we were, we were reluctant to leave the cab altogether so after much negotiation we managed to settle upon an inflated fixed fare. Fifteen minutes later we pulled up outside the Hanoi Guesthouse on Ma May street in the old quarter of Hanoi. All the lights were off and after a couple of minutes spent knocking at the door, a boy in pajamas undid that latch and welcomed us in. 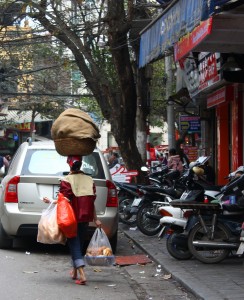 He explained that everyone was still asleep but we could take a seat in the breakfast room and help ourselves to some tea and coffee. The team at the guesthouse were lovely and showed us to a beautiful room on the top floor which came complete with a huge bathtub, the first I’d seen in a while. It was the perfect place to get some rest before we tackled the attempt to get a Chinese visa part II. We weren’t holding out much hope as all the travel/visa advice forums we’d read online had reported 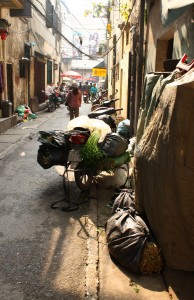 much higher rates of success in Ho Chi Minh, so we started to mentally prepare ourselves for a trip into Laos if our Hanoi attempt failed. We had received one tip off though and that was to try Vietnam Impressive who apparently have contacts inside the embassy and can book train tickets too, so that might be our best shot at getting around the ‘no visa, no train ticket; no train ticket, no visa’ quandary. As soon as we were bathed and refreshed, we set off for the Vietnam Impressive offices which were in an old four story house on the outskirts of town. We’d spoken to a ‘Mike’ on the phone but he was out and about so we were dealt with by two lovely girls. They assured us that there should be no problems procuring a double entry visa and told us to leave it with them. It could take around four days they said and so we went straight back to Hanoi Guesthouse to book ourselves in for the rest of the week. 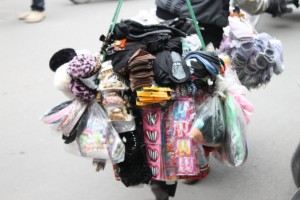 With the visa situation out of our hands, we were free to explore the wonderful streets of Hanoi at our leisure. We’d heard many people tell us what a special place it is but you really have to see it to understand fully what they mean. 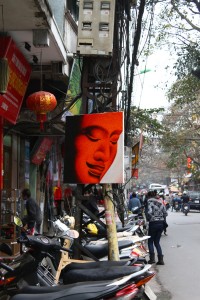 The first real surprise was the dip in the temperature, especially given that this was the first cold weather we’d experienced for nearly eight months. Everyone was wrapped up in winter coats, scarves, hats and mufflers and many glove and ear-muff loaded bicycles were being carted around the tourist streets hoping to make money off those tourists who had been caught out in the trip up from Thailand, Laos or Cambodia. 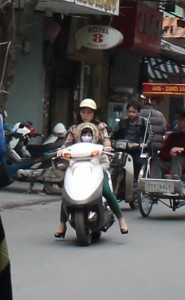 At a nearby school, smartly dressed women driving scooters in coats and heels were busy bundling warmly-wrapped children onto their bikes. Scooters and motorbikes are the transport option of choice in Vietnam and Hanoi was no exception. Everywhere we went, the streets were filled to the brim with parked scooters and at the beginning and end of each day every street would buzz with the vibrations of hundreds of scooters making their journey home. The pollution levels were admittedly difficult to take and the cold air meant the clouds of fumes would hang uncomfortably over the city. 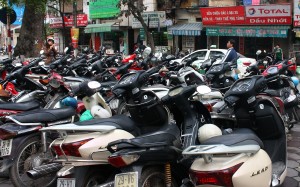 Even the legendary Hoan Kiem lake and park, which mark the centre of Hanoi and are always full of joggers and Thai Chi groups, could offer no respite and the only option left was to make like a local and invest in a carbon filter mask/fashion statement (whether this had any effect beyond the ridiculousness of its lurid blue flower design was questionable). Strolling along the lake, masks in place, we were lucky enough to get a glimpse of the ancient turtle that inhabits its waters (as homage to the legend that Lê Lợi, one of Vietnam’s greatest heroes, returned his magic sword to the Golden Turtle at this very lake). 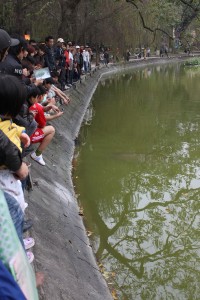 The present soft-shell turtle, which is affectionately known as Cụ Rùa or ‘Great Grandfather’ is thought to be one of the most endangered freshwater turtles in the world and is sadly not doing so well currently, due to the polluted waters of the lake. In 2011 a rescue operation was carried out to treat the pink lesions on the turtle’s skin, thought to have been caused by floating debris in the lake but it has since been returned to the water as it is considered sacred to residents of Hanoi. Sightings of the enormous creature are thought to be lucky and we were amazed to see how quickly an excited crowd gathered around the lakes edge as word of the turtle’s appearance spread. 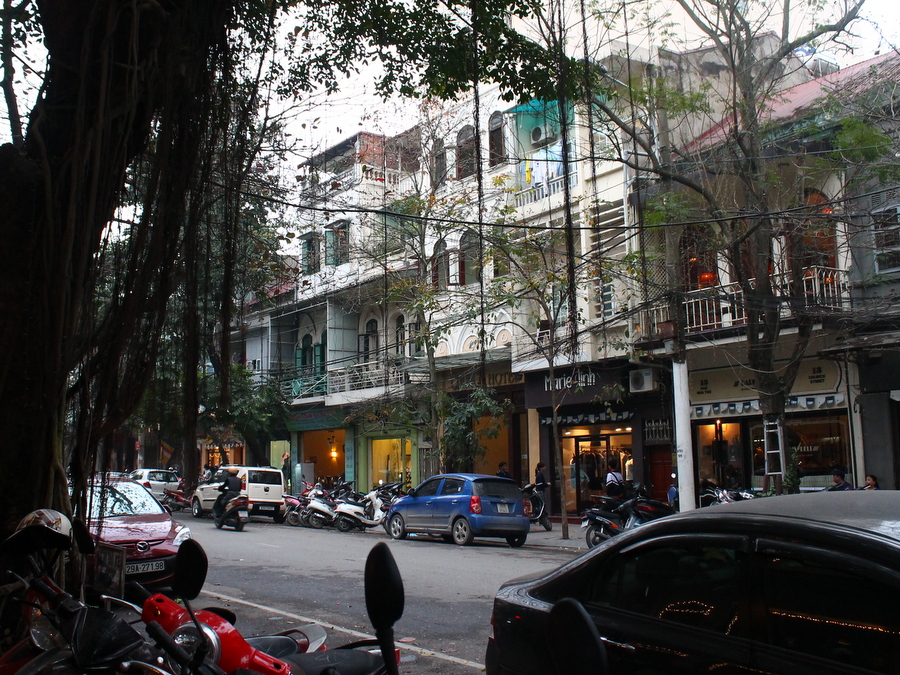 After the excitement at the lake we decided to wander to the French quarter which is where many of the smart hotels, restaurants and patisseries are based. It was the closest I had come to feeling autumnal all year, warming up with a hot chocolate and a pain au chocolat as the evening dusk set in and the shop fronts and lake lamps began to light up. We were very glad that we would be staying in Hanoi for a good while longer because it was clear that this intricate city has a great deal to explore.

The next day we began our explorations in Ma May street where our guesthouse was based. I had come down with a bit of a cold so somebody recommended that we visit 69 Bar a few doors down for their sweet and sour dill soup and lime, ginger and honey tea. 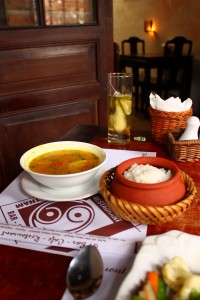 Both were delicious and helped set us up for another chilly day in Hanoi. For dessert we opted for the vegetarian Tamarind café on the same street which we heard was offering a heater and the prospect of warm apple pie for those who, like us, were missing home just a bit. 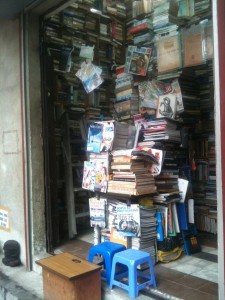 Ma May street is central to Hanoi’s old quarter, and is perhaps the best known to tourists but the real action takes place on the surrounding streets which are bustling day and night with street sellers touting every kind of imaginable product you could ever wish to buy. The old district is a perfect example of a giant market where each street specialises in something different, so while one street is known for its bamboo ladders, another will be famous for coffins or kitchenware. A helpful lady we met in a shop sketched a basic street index for us, indicating which street name meant what, which helps to get across just some of the weird and wonderful things you can find in the narrow streets of the district if you know where to look: 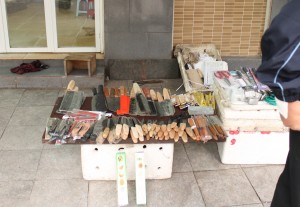 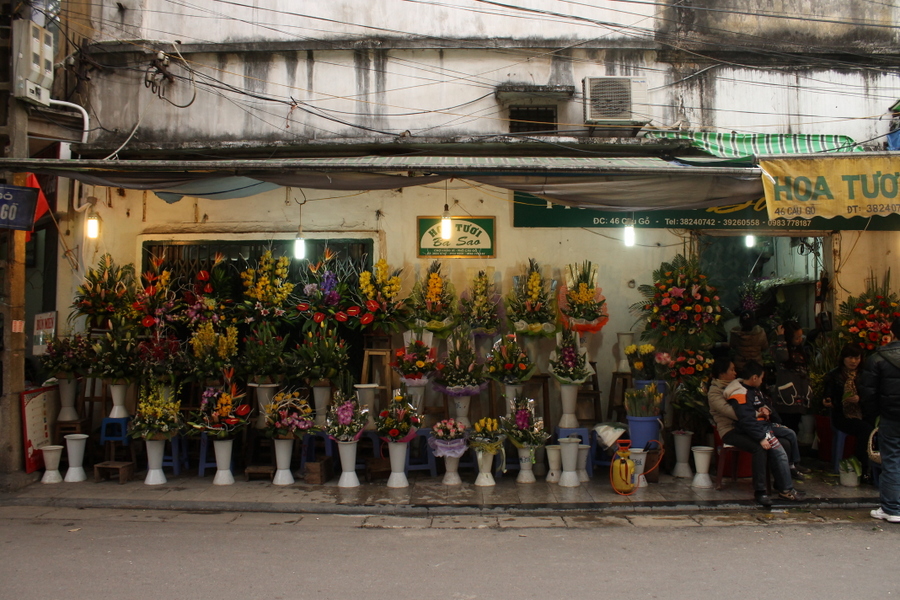 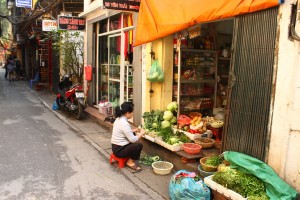 It was a pleasure to while away the hours just drifting from street to street, occasionally pausing to draw up a blue or red plastic stool to perch on at one of the many street cafes from which we could watch the world drift by while sipping a Vietnamese coffee. Like many South East Asian cities, the streets really are where the action is and everything from peeling potatoes, preparing meals and ‘chewing the fat’ with friends or family to having a hair cut takes place on its pavements. 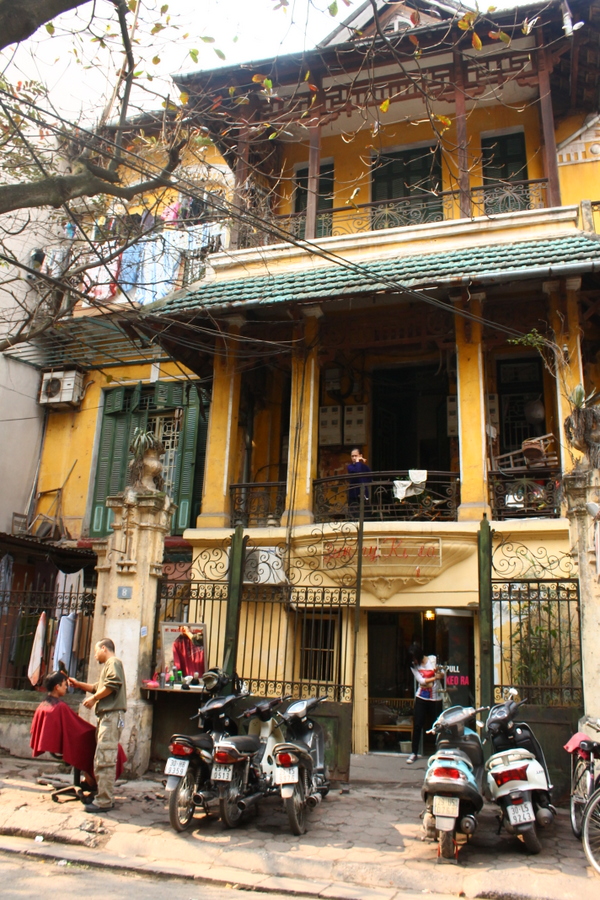 As the days went on, the sight of pavement slabs covered in sunflower seed husks, crab shells and discarded bits of hair became a familiar sight and one which I began to find strangely comforting. In the evenings, many of the cafes would transform into Bia Hơi stalls where fresh, 24-hour shelf life beer (containing no preservatives) would be sold by the pint for the equivalent of 15p, accompanied by freshly baked crisp baked and pipes/tobacco if desired. 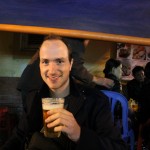 When we’d had our fill of Bia Hơi we would often wander up the boutique-lined Nha Tho street to Nha Chung or ‘lemon tea’ street where we were told the young, hip crowds of the city like to spend their evenings. The neo-gothic St Joseph’s Cathedral can also be found here and it looks rather spectacular lit up in the dark. This part of town bears the unmistakable markings of French influence perhaps more than any other, with its cathedral square and neatly painted, shutter fronted cafes and shops bordering it either side. The beautifully tiled La Place café provided a beautiful place to work and read from while looking out on the Cathedral and square below through the balcony window. 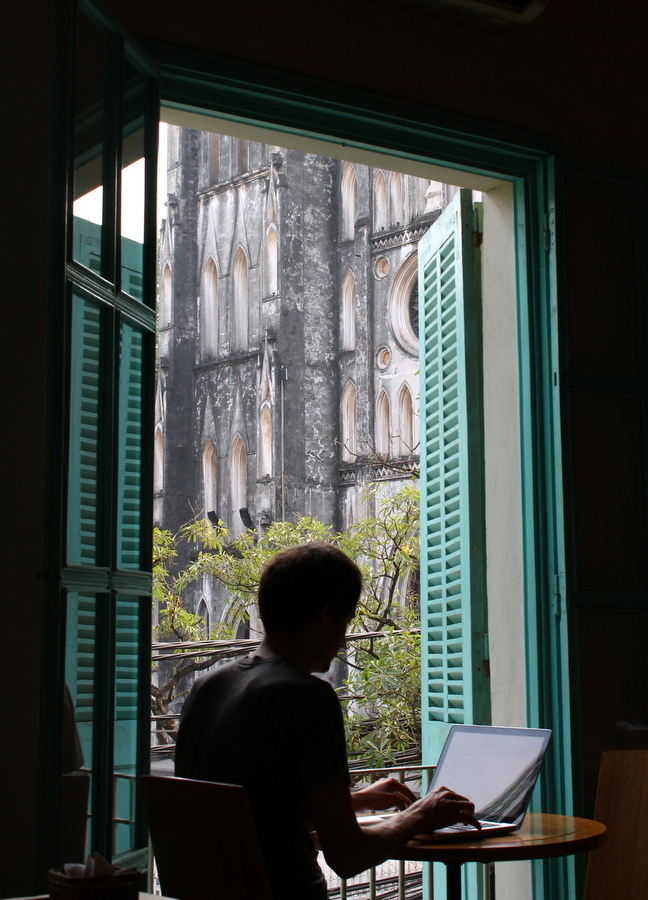 On our fifth day in Hanoi we heard back from Vietnam Impressive, who told us that they’d failed to get us a double entry visa (apparently visa entry requirements had become stricter in China since January 2012) but they could get us a single entry which would at least get us to Hong Kong where we should have ‘no problem securing another single entry visa’. 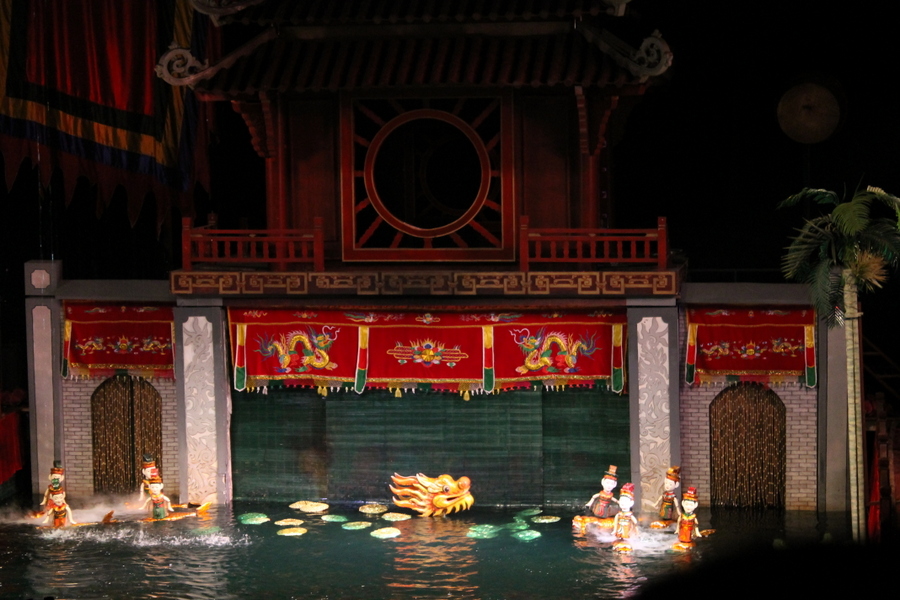 They hadn’t even needed to sort out the train tickets from Hanoi to Nanning in order to get the visa so we decided to book those through our hotel which was a fair bit cheaper. With one more day left in Hanoi, we decided to spend our last evening at the Thăng Long Water Puppet Theatre on Dinh Tien Hoang street near the Hoan Kiem lake. We couldn’t leave Vietnam without seeing one performance of this traditional Vietnamese performance art and we weren’t disappointed as a live band sung, plucked and drummed their way through various water themed scenes from Vietnamese culture and legend (think buffalo’s tilling, farmers dancing, goats fighting, golden fish jumping and dragons soaring). It was a more than appropriate way to end our stay in such a wonderful and surprising city. 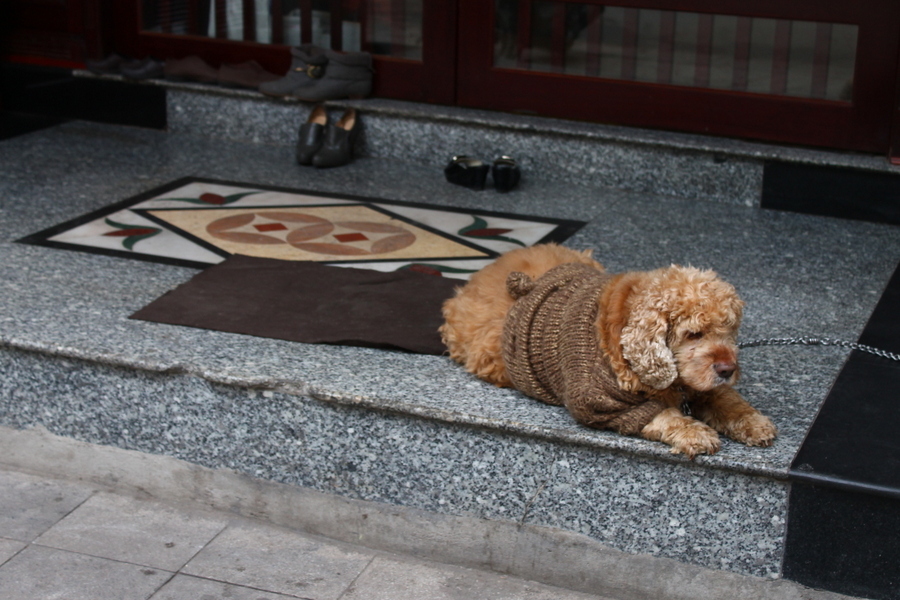