The Great Hornbills of Langkawi 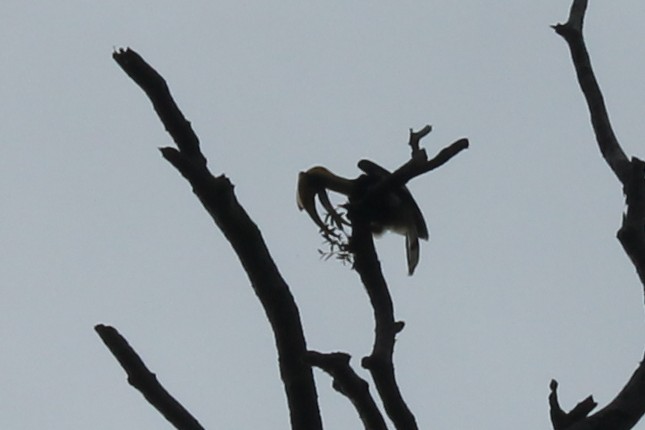 The following day, at the crack of dawn, we boarded the ferry that would take us to the island of Pulao Langkawi, just a few kilometres south of the Malaysia-Thailand border. 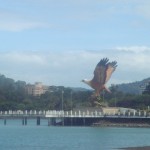 The ferry journey itself was only a couple of hours, punctuated by one and a half martial arts films (a recurring theme on South East Asian transport, we were soon to find out). Our first glimpse of the island, appearing abruptly through the salt-encrusted windows of the ferry, was of mountains, dense jungle and an impressively detailed statue of an eagle (in Malay, the word Langkawi means a red-brown eagle).

After partnering with a Brazilian journalist to share the cost of a cab to the main beach, we passed along a newly-built highway straight to Pantai Cenang, which is also the main ‘tourist’ zone of the island. Some three kilometres of pristine coastline have been systematically blocked off by giant resort hotels and the beaches here are divided into tightly boxed sections for guests from each, while the sea itself has been split into small swimming sections and noticeably larger water-sports areas. 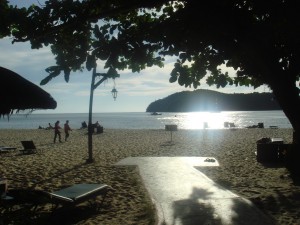 We were staying at one of the last cheap hostels available within walking distance of a beach on the island, though we had to pretend to be resort guests in order to access the beach itself. With one notable exception, Langkawi was for us the island of disappointments. Back in 1968, the then Malaysian prime minister decided to ‘turn’ Langkawi into a tourist destination and began by granting it duty-free status. As the cheap drinks began to flow, so did the resorts and everything from the Four Seasons to the Hilton has laid claim to a patch. There are many smaller, less developed islands which make up Langkawi as a whole (actually around 99 in total) and we have been told that those to the North East in particular are still relatively secluded but accessing these on a budget can be a bit of a challenge. Our main reason for stopping here was to catch a ferry to Koh Lipe in Thailand where we hoped to cross the border in a relaxed, beach hut environment but even though we knew the main island was ‘touristy’ we weren’t quite prepared for what we had walked into: the hostel we were staying in was something akin to a club 18-30 holiday camp if one were run out of makeshift cabins surrounding a paddling pool full of ducks. The owner would spend all day sitting by the inflatable pool scattering duck seed while listening to the Badminton results on the radio, an activity he’d replace in the evening with poker and loud drum n’ bass until 3 a.m. The ‘beautiful white-sand beach’ we’d read about in the guidebook was actually a jellyfish-infested and oil-polluted stretch of water and litter-covered sand. 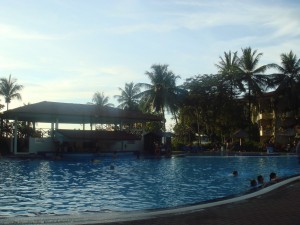 After spending a depressing hour or so in our dimly lit cabin questioning why we had come here, we decided to make the best of the situation by making full use of our beach-blocking neighbour’s pool and exploring the lusher inner parts of the island (which thankfully have been granted national park status). The Langkawi that you see when you step off the mainstream tourist trail is actually well worth exploring. We had read about a couple of local Malaysian naturalists who run highly recommended guided nature treks (see Dev’s Adventure Tours or Jungle Walla) and who only observe and never feed or interfere with the wildlife, so we decided that we would go on one of these in an attempt to restore our dented enthusiasm for the island. 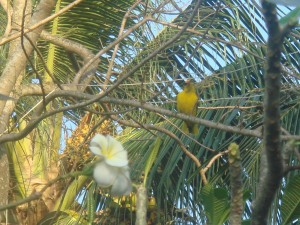 We opted to go on the early morning hill trek with a view to spotting some of the island’s famous bird residents. We were picked up just before dawn, though our guide had inadvertently woken up the ducks and dogs and subsequently half the hostel while trying to find our cabin. Leaving behind the quacking and barking, we were soon amongst much quieter, misty fields where we stopped to watch the dawn break. 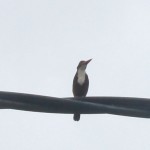 The first bird that our guide spotted was a White-throated Kingfisher, which was perched on an electric wire serenely absorbing the first warming rays of the dawn sun. After a brief pause, we continued to drive further up the mountain that makes up the north of the island. The guide stopped and pointed to a distant tree, where we could see a small dark-blue bird with a long hanging tail that looked like a pair of eyes. 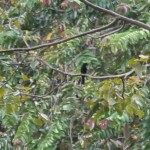 It was a Drongo, a word meaning idiot in Australian but in reality it is anything but as one of its main functions is to warn other birds and animals of approaching predators in return for the pick of the mid-morning insects. It is also a brilliant mimic: we heard it impersonate three or four other species while standing near by, a little like the Lyre birds we’d heard in Australia.

Our journey carried on up through the rainforest road which was alive with a tropical dawn chorus, courtesy of both birds and monkeys who we could hear cracking branches in the canopies above. Our guide spotted a few other species before we heard the whoosh, whoosh sound of some large wing-beats. It had begun to lightly rain and our guide had a look of intense concentration on his face.
He led us slowly around a corner and there in the canopy of a large forest tree was a Great Hornbill drying its wings in the sun. 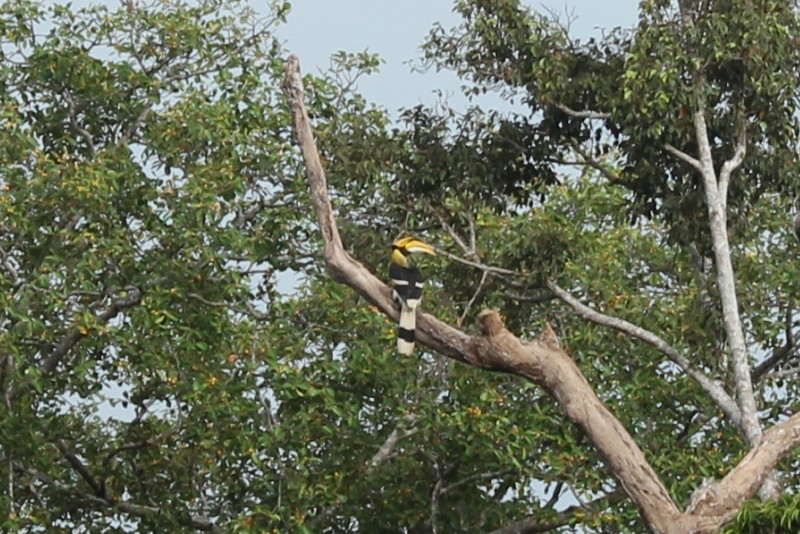 It looked almost pterodactyl-like and we weren’t surprised to hear that the Great Hornbill is amongst the largest of its species. It seemed that the light dawn rain was in our favour as we went on to see many more Great Hornbills gather in the trees and whoosh over our heads. 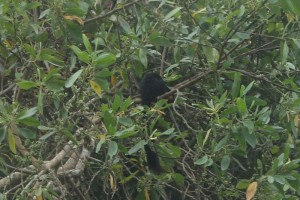 We were also lucky enough to spot the significantly smaller Oriental Pied Hornbill, the rare sight of a pair of Wreathed Hornbills who were also drying off in the sun, a Giant Squirrel, some Dusky Langur Monkeys and a few Macaques. 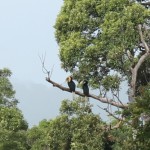 After a brief visit to the peak and a pit stop in our guide’s uncle’s restaurant for a Malaysian brunch of omelette pancake and a Teh Tarik, we were taken to some open pastures to spot Kingfishers. Sadly we didn’t see any more but we did spot Green Bee Eaters, Golden Orioles, Bitterns, Snakes, Herons and a Pitcher Plant. 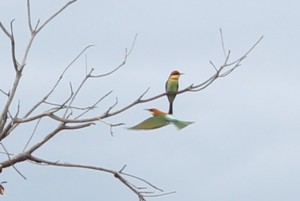 We were also shown how to make natural plasters by wetting and rolling the leaves of a local plant until it made a gummy paste, which the locals use to stick over and heal wounds. After this trip, Langkawi suddenly didn’t seem so bad after all and even the ducks and the hostel dogs were slightly more endearing on our return (though this feeling sadly never extended to the post midnight drum n’ bass). We were glad that our stay had ended on a brighter note but were both excited and relieved at the prospect of setting off the next morning with a mission to cross the Thai border by sea.

One Response to The Great Hornbills of Langkawi