While Thai and Malaysian food is now readily available on most high streets in the United Kingdom, there aren’t many places where you can sample the somewhat understated cuisine of Cambodia. Though it draws on culinary influences from Thailand, India, France (baguettes and pate are a common find), China and Vietnam, the Khmer have created several dishes which they are proud to describe as distinctly Cambodian. Fresh river fish are a mainstay of the diet (the large Tonle Sap lake runs through central Cambodia, while the Mekong river also curves from northern Laos to the east where it heads into Vietnam), as is coconut and rice which accompanies nearly every dish.

The food is less spicy than in neighbouring Thailand as local Kampot pepper tends to be favoured over the use of the Portuguese introduced chilli pepper in food. With an abundance of local salt and pepper available, Cambodian dishes tend to be elegantly flavoured and thoughtfully concocted. For an extensive list of Cambodian cooking ingredients and recipe ideas see Asiarecipe.com, or if visiting Cambodia it is worth signing up for one of the many reasonably priced cooking classes on offer in most towns. Two of our favourite dishes in Cambodia were the fish Amok curry and the Green Mango Salad, which we include recipes for below… 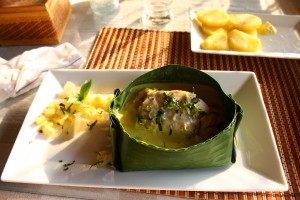 The most famous Cambodian curry is undoubtedly the Amok, which is usually served with river fish or chicken (although many restaurants now offer a vegetarian option) and tends to be presented in a bowl made from banana leafs. This is a delicious, coconutty curry which is flavoured with garlic cloves, galangal root, lemon grass, tumeric, paprika, sugar, salt and usually fish sauce. These ingredients are usually combined to form the Kroeung which is the word Cambodians use for the curry or herb paste they use as a base in a number of dishes. The generally used ingredients of this paste are usually:  galangal, lemon grass, turmeric, zest of kaffir lime, garlic, rhizome and shallot. It comes in three different but naturally induced colours – red, green and yellow. The red colour is created from the use of a certain kind of chilli pod, the green is created from crushing the leaves of the lemongrass herb and the yellow colour is created from using mainly the stalks of the lemongrass. The Amok curry uses the yellow coloured paste base, as per the below recipe

First make the kroeung, then slice the fish thinly and set aside. Remove nhor from stem; slice the kaffir lime leaves and cayenne peppers thinly.
Stir the kroeung into 1 cup of coconut milk, and when it has dissolved, add the egg, fish sauce and sliced fish. Then add the remaining coconut milk and mix well.
Make the banana leave cups, then put the nhor in first, and top with the fish mixture. Steam for about 20 minutes or until the coconut milk is solid, but still moist. Before serving top each cup with coconut cream and garnish with kaffir leaf and cayenne peppers.
Serve with steamed rice.

Making banana leaves cups:
First clean the leaves with a wet cloth, then dip them into boiling water so they are soft and do not crack when being shaped.
Cut circles 25cm in diameter and place two togther. This is important as one leaf is not strong enough to hold the mixture.
Mark a square in the middle of the circle, this will be the bottom of the cup.
Then put a thumb on one right angle of the square and pull up 2 sides, tucking the fold, and pinning together with a tiny bamboostick (or toothpick). Then move the next right and repeat. Continue until all 4 sides of the cup are held together.

A green mango salad is an excellent accompaniment or starter to an Amok. Whether it’s the freshness or the combination of the ingredients themselves, this salad has an unmistakable zingy flavour which makes it a worthy dish in its own right. Here is a recipe for a Thai variant of the dish – for the Cambodian version, the chillies are very much optional and we also found that they tended to add fresh, grated ginger, kampot peppercorns and diced grapefruit which added to the taste. 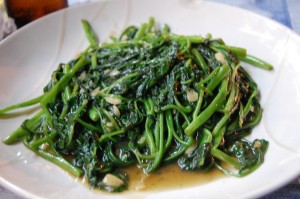 This is one of the main vegetable staples in Khmer cuisine but is also found all over South East Asia. The vegetable is washed, the leaves cut off and the stalks are then fried in coconut oil with the addition of garlic and then served with an oyster style gravy sauce. Delicious!