We went up to the bridge on New Year’s morning to be greeted by a worried health and safety officer, clutching a piracy warning which had just been faxed over. We had now reached East Timor which meant that we were nearing the Singapore and Malacca straits. 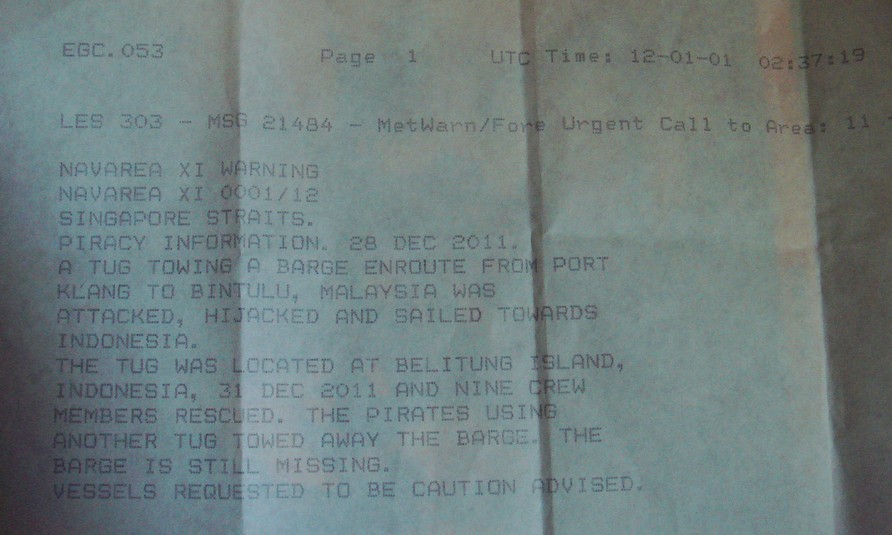 Over the years, both stretches of water have become synonymous with pirate attacks because they are the main passageways for vessels travelling between India and China – it is thought that 40% of the world’s trade passes through this area. As soon as we heard that we would be travelling down the Malacca strait, we did a bit of research of our own and found assurances from the International Maritime Bureau, that thanks to several neighbouring countries clubbing together to provide sea patrols in the last five years, attacks on cargo ships have been dramatically reduced in recent years. However, they are not yet uncommon, especially for unpiloted barges pulled by tugs, one of which was unfortunately the victim of the hijacking attack which the note described. The health and safety officer passed us a print out before solemnly telling us that this is ‘very dangerous area’, furrowing his brow and looking out to sea with his binoculars. We told him about our findings from the IMB which suggest it is now safer for larger cargo vessels such as the Carelia, but this didn’t seem to calm him so we leaft him to his watch.

Later in the day, Captain Alexey told us that now we had reaached the Timor Sea, the crew 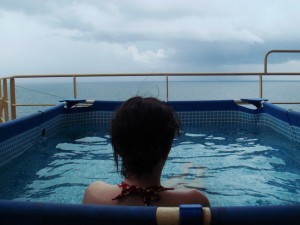 would be putting out a ‘sitting pool’ on our deck with a table and chairs so we could relax outside. True to his word, we soon found it brimming with water on the deck and spent the rest of our afternoon outside scanning the waters for pirates (there were none but we did see schools of tuna and porpoises). The next day was pretty much the same (minus the piracy warning) and we sat in the pool drinking smuggled-on wine out of tea cups, prohibition style.

By early evening, we noticed that banks of whipped cloud had formed on the distant horizon. They looked quite beautiful, fluffily connecting sky and sea (I irritatingly got 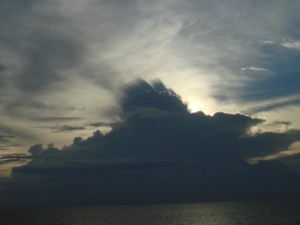 Stairway to Heaven stuck in my head but luckily this wasn’t to last for long)… As the sun began to sink lower, the entire bank started to shimmer and then slowly darken, turning innocent marshmallow-like cloud into a foreboding tower of dark grey. We soon realised that boat was completely surrounded on one side by quickly blackening cloud, so we hastily ended the pool session and ran inside to change. The cabin was by now eerily gloomy, so we headed up to the Bridge for some company. The officer on watch was absorbed in some map reading but we noticed that the industrial style windscreen wipers were out in preparation for something. 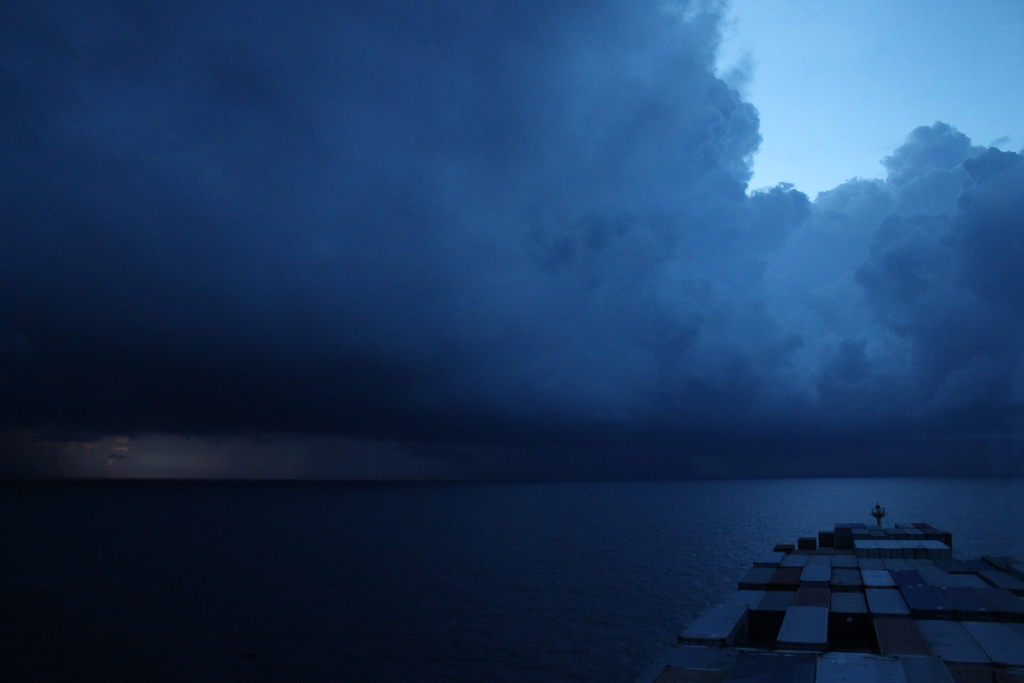 We cautiously questioned the officer who told us matter-of-factly that we were heading straight into a tropical storm. He did not seem at all phased but I couldn’t help scenes from Joseph Conrad’s Typhoon surfacing in my mind. The waters were eerily still (so I now knew what was meant by ‘the calm before the storm’) and there was nothing to do but watch, wait and, to take my mind off the agonising approach, photograph. The cloud had now become more akin to a curtain and there was a small opening at its base which let through a brief 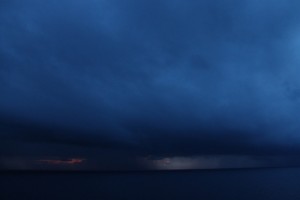 but tantalising window of dusky light. We could also make out a solitary flashing light from a lone fishing boat across the water before the downpour began and it, like us, was swallowed by the engulfing dark. There wasn’t much rocking, or maybe we’d become accustomed to it by then. We managed to sleep through the rest of it, though I couldn’t help thinking about the fishing boat. By morning the skies were clear again and the storm had passed, leaving only a few small pools of water on the roofs of the containers behind. 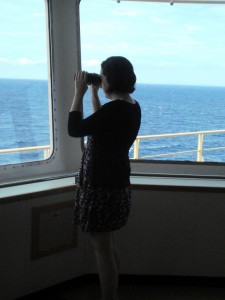 eventually came inside. This was because we had now entered Indonesian waters and pirate attack territory. The pirates apparently hide among the many Indonesian fishing vessels which frequent the waters here both day and night, using them for cover before they make a dash for their target. When there is no full moon, the fishermen switch on large lamps which act as false moons to lure the fish to the surface, but also accidentally lighting the way for pirates. None of these small boats and trawlers have AIS, which ships use to identify each other, so it is therefore difficult for a cargo ship to spot an approaching vessel. On the bridge, the health and safety officer repeats his danger warnings to us but this time adds ‘be very careful in Klang…very dangerous too’, which is where we are due to disembark. We do not know what to make of this. 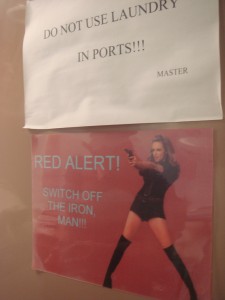 South China Seas, crossing the equator for the second time during our trip. As we begin to near Singapore, there was mounting excitement on the ship. At least three of the crew were due to finish their contracts there and go back to their homes after a few days’ leave in the city. At dinner, one of the younger sailors tells us that ‘the air in Singapore smells different, I go out on deck and take it into my lungs, it smells of freedom. I can almost taste freedom now’. This conversation about freedom switches from English to Russian at the table where we gleam the odd recognisable word (ecstasy, poppers and prostitute), while they smile at us. We were coming up t

o our 20th day on board and were also more than ready to be back on land. I remember Michael Palin describing his experience at sea as a sort of sensory deprivation but I liken it more to spending time somewhere remote where your surroundings become familiar but your eyes and senses become keener as they are honed to notice even the smallest change, such as a spider on a staircase, a fish skimming the waves or a swallow nesting in a container. Nothing is ever predictable in this world and you therefore never quite get used to it.