A Rock n’ Roll Christmas (of the non-musical variety)

Christmas at sea was not part of our original plan. We were supposed to have spent it with our friends in Melbourne, in the sunshine, probably around a barbeque which would perhaps have been on a beach. Sea travel, however, does not care for best laid plans and so we found ourselves on the AS Carelia spending Christmas and New Year with an all-male Bulgarian, Russian and Filipino crew who we barely knew.

The first surprise was that as per Russian tradition, Christmas dinner was scheduled for Christmas Eve rather than the 25th, so at about 7pm we made our way down to the crew’s mess (dining) room, where three tables had been laid out – one for the the deck, 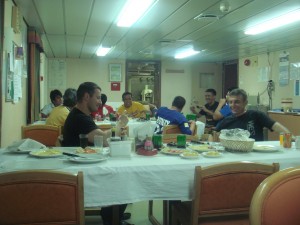 mess and engine hands (who were mainly Filipino), one for the rest of the regular crew (mainly Russian) and one for the officers (mainly Bulgarian). Despite being organised for space reasons, this arrangement seemed a little less than Christmassy – we were only just beginning to learn the importance of ranks. These thoughts soon evaporated as a maritime feast of epic proportions was unveiled by the chef and chief steward, who had been toiling away all day behind closed doors. There were roasts of every kind imaginable alongside rice dishes, salads and a big chocolate Christmas party cake. On each table, along with a few bottles of something clear, were plates of what looked like smoked salmon but which the Russians told us is called Somka (smoked fish) and also some horse salami(!) that had been cured by the Captain himself. We were treated very much like guests at a village banquet and felt obliged to try a little bit of everything, under the 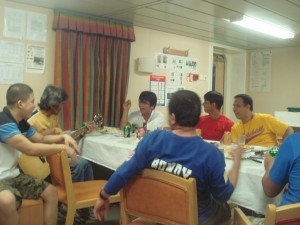 scrutiny of the Captain who watched while we chewed and swallowed his culinary contributions. At 7.30pm, the Captain read out a Christmas message to the crew from the ship’s owners (the Ahrenkiel group) wishing everyone a safe and happy Christmas. Then the toasting began and did not, it seemed, ever stop. Every time someone got up or sat down at the table, a new toast was offered and after a few hours of eating and drinking, it wasn’t only Alex who was feeling a little worse for wear. As it neared midnight, a few people had left from every table except for the one the Filipinos were seated at. For them, the celebrations had just started, as guitars emerged from cabin rooms and a long session of acoustic karaoke began.

It wasn’t until just after midnight that the real rocking and rolling began and the floor of the ship started to move from side to side. The Captain had warned us that we were headed for some rough waters (due to gale force winds outside) but we hadn’t been prepared for quite how turbulent it would become. We managed to get a 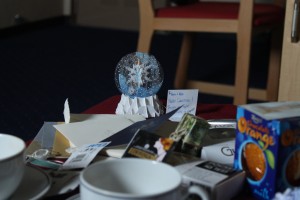 little sleep as the cabin creaked and strange metallic noises echoed from the bowels of the ship. By Christmas morning, our cabin was still tilting but we tried to be as festive as possible, opening some chocolates sent from home and a couple of small gifts (our friend Julia had sent us some Christmas decorations and teabags for the morning of Christmas day, which really did transform the cabin). By the evening, however, the paper chains were sliding backwards and forwards across our cabin walls like windscreen wipers and the rolling was getting slowly worse. We attempted to go to bed but were woken in the dark to the sound of the ship’s alarms blaring (which happens when anything needs attention from the engineering team) 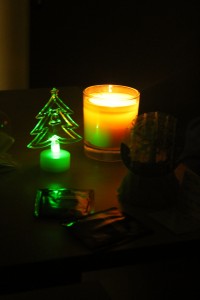 , some increasingly loud creaking and eventually crashing, while everything on any surface in our room tumbled its way ungracefully to the floor. We followed shortly after, as a particularly violent roll flung us out of bed and onto the carpet with a bump. Attempts to share the sofa were futile (and lying down on it felt too much like a being on a theme park ride) so we got changed into warm clothes and decided to ride it out as best we could. The strange part was that we didn’t feel that sick and while various members of the crew were taken ill, we were up on the bridge early the next morning sipping a shallow tea, eating Christmas biscuits and listening to Nightwatch’s version of Walking in the Air belting out from the radio (the Bulgarians and Russians could not get enough of this song)! The captain came up to the bridge to check some charts and did not hide his shock that we were up and about. He later came up to us and said ‘I am proud of you…’which we didn’t know whether to take as a compliment or not (we obviously did not look like able seamen).

By the 27th, as we neared the East coast of Australia and headed up past the Whitsunday Islands, things had begun to calm down again. We were told that the route is generally smoother from here on out and we would feel the air become heavy with tropical humidity again. As we neared the Great Barrier Reef (where the depth of water can be as little as a metre), our ship was required to take a pilot on board to 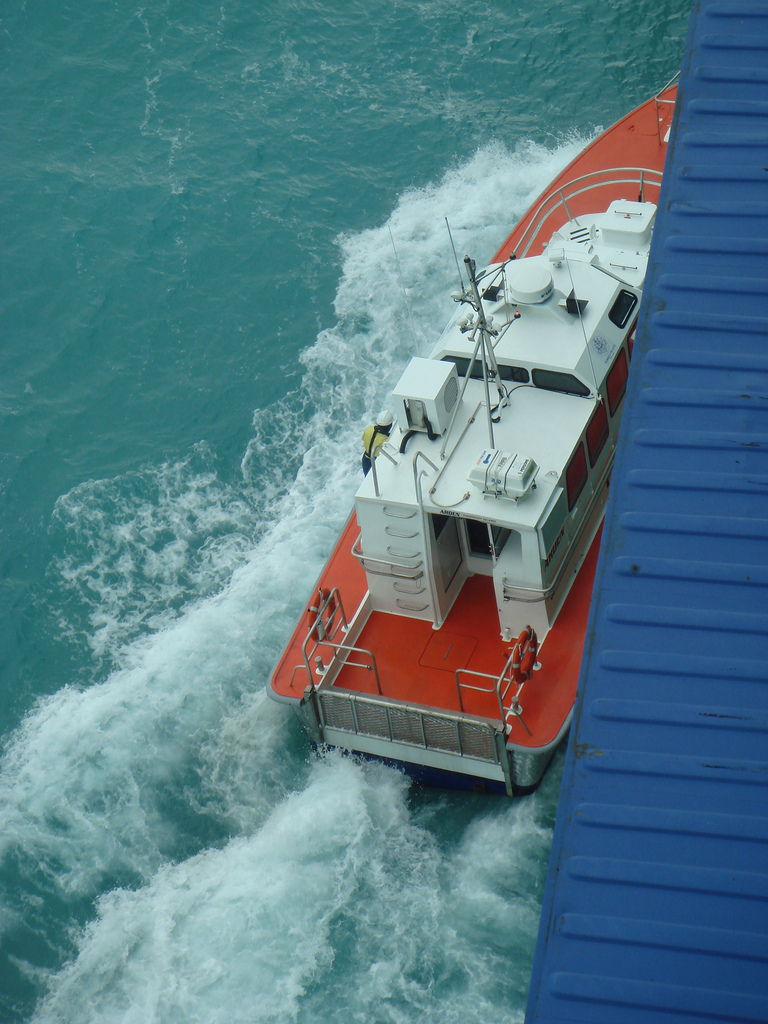 navigate the reef and ensure that no damage was made to it. We were told at lunch that the pilot had boarded that morning and was from Wales – at first I had thought we were being told that pilot whales had been sighted, so I think they thought my excited interest was a little intense! Glyn might not have been a whale, but he was, as Ivan had been trying to tell me, from Wales. It was nice to chat to him about ex-pat life in Australia and memories of home for a bit. He showed us maps of the area we were passing through and gave us information about the islands, one of which is apparently just used for exporting fine sand to China and Japan for use in make-up. Glyn stayed with the boat for 24 hours before being dropped off on Thursday island on New Year’s Eve, where he would spend the night waiting to be collected by a returning vessel which he would pilot back to Cairns on New Year’s Day. We hoped he wouldn’t be alone but he was philosophical about it and explained that you had to be, otherwise you’d never make it as a seaman. 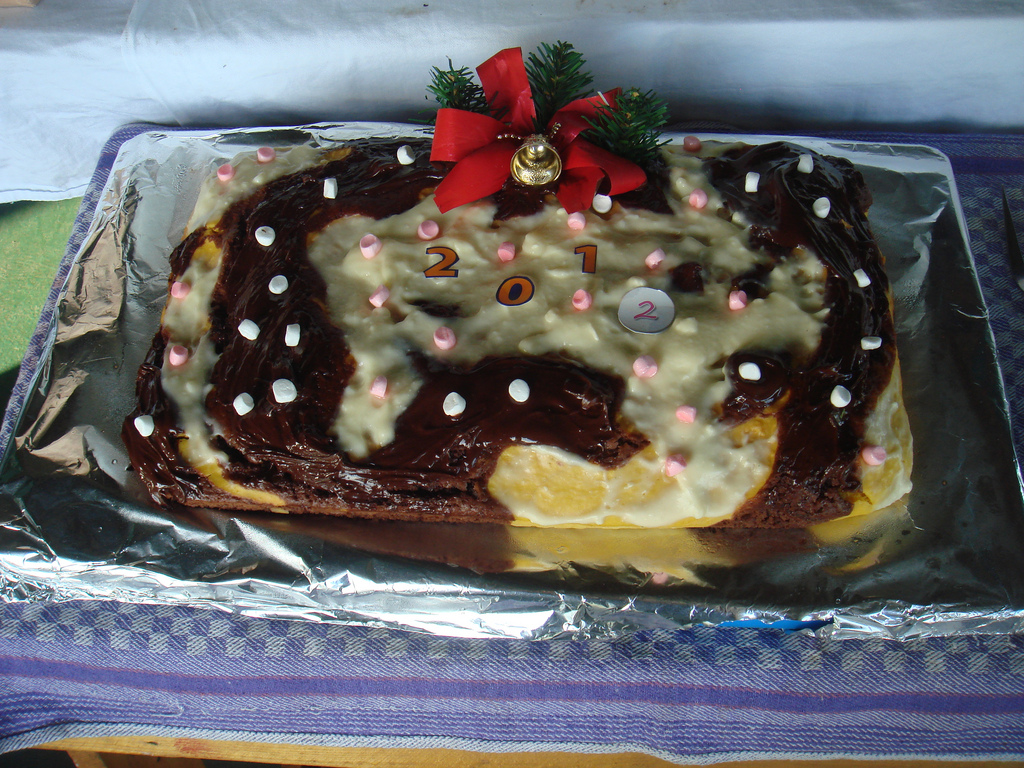 When I had first envisioned sailing through the tropics I had thoughts of sunshine, clear skies and sparkling blue waters. I had forgotten one key fact however – it was the wet season. Glyn had told us all about the heavy rain but we were a little alarmed to hear that there was a tropical cyclone headed our way (only category 1 apparently, but the word ‘cyclone’ is never welcome when you’re on a boat). My alarm intensified as I 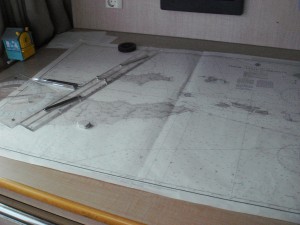 read in one of the shipping news magazines on-board that over 16 people from a cargo ship crew died in a typhoon just off the coast of Japan, having failed to get authority from the ships owners to dock in time. Leafing through these magazines sadly brought home the ever present dangers for crew who spend a good deal of their lives at sea. I understand now why a couple of them found it difficult to understand why we were travelling by cargo ship out of choice. Reports of kidnappings and crew deaths (seldom picked up by mainstream media channels) are all too frequent. It’s a tough life for both the crew and the families they have to leave behind and I began to understand why many of them had become cynical over the years. 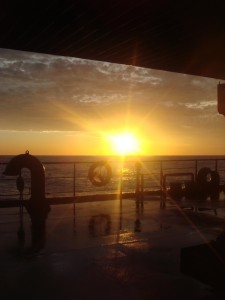 After a couple of  hours of magazine reading, I looked up to see that the rain had stopped and the sun had actually come out (I was told to make the most of it as more storms were on the horizon), just in time for the New Year’s Eve BBQ which could now take place out on the rear deck around the anchor cables and cargo containers. Tables were laid out in a space behind the containers and various meats were already roasting over charcoal filled bins. The atmosphere was a little more sober than at Christmas time (it had been a tough day 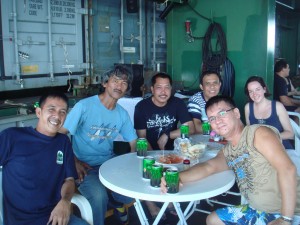 with alarms sounding every hour and everyone was missing their friends and families) but it was a nice occasion all the same. By midnight many people had had to return to their stations, a couple were resting in chairs, staring wistfully out to sea while others were dancing to a mix of Eminem’s ‘Without Me’ – but we chose to go up on deck and make use of the lack of light and clouds to watch some stars. We spotted Venus, Jupiter and we think Orion’s Belt and were so engrossed, we didn’t even notice that midnight had already been and gone.