The first major difference that we noticed between life on passenger vessels and being a guest on a cargo ship was the food. Twenty men (and in this case a couple of 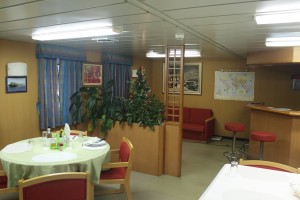 passengers) are fed three meals a day by a chef and the chief steward, who cook up a wide variety of small-scale, ‘home-cooked’ dishes which have been nutritionally balanced for people who are at sea for long periods of time. These were far more tasty and less fatty than the mass-portion calorie-fest you get on the passenger ships. Of course, the flip side is that except for special dietary requirements, we didn’t get any choice in what we would be eating day-to-day (the vegetarianism I had been trying to sustain at home had to be put on indefinite hold). The second major difference is that we were treated like house guests making the whole experience immediately feel more ‘real’ and comforting. On the passenger ship, clear divides between passengers and crew are set up and although this is undeniably the appeal for some, we felt very uncomfortable being ‘looked after’ by people who ultimately resented the work that such huge numbers of passengers created for them. During our first couple of days at sea, we were interested to find that we had been given roles (under the titles ‘unit 7′ and ‘unit 8′) in the event of various emergencies. Even though the instruction was generally ‘to assist as required’, it was refreshing to be treated as an individual, even if we were still just a ‘number’ on paper.

At lunch and dinner, we were sat on a table for 6, alongside the officers on board (who were nearly all Bulgarian or Russian) but we found that we had to be very prompt if we were to catch any of them before they finished eating and returned to their stations. One evening, it was just us and Iliya, one of the newer crew members, at the table (the officers tend to sign on for three-four month contracts, the more general 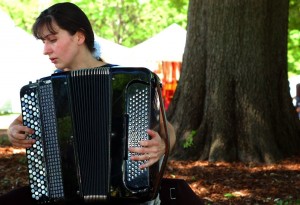 crew for six months to a year and the cook was signed on for two years which, as one of the younger Russian officers said ‘is just crazy’). Iliya asked if we would like to come and see some pictures of his family and homeland (Bulgaria) and listen to some ‘good music’ in his cabin. He generously laid out home made ‘cordial’ and Bulgarian chocolate which he had brought on board and we had an interesting evening listening to Russian accordions (Bayans), folk music, a harrowing song designed to highlight violence against women in Chechnya and a surprising selection from Tom Jones (‘he is big in Bulgaria’ apparently). The evening helped to break the ice in other ways to as Iliya explained that some people on board may have been keeping their distance from us because ‘they think you are agent for owners’. We quickly assured him otherwise and then drank ‘to the good night’ in celebration of the fact. After that evening, word seeme 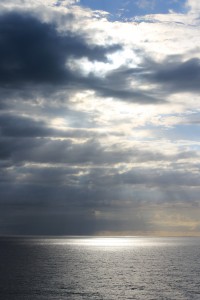 d to spread that we were not spies, and some of the other officers began to attempt conversation with us at dinner. Through these conversations we learned various interesting snippets of information, for example that crocodile blood is apparently an ‘excellent antibiotic’; the captain of the fated Rena was ‘an incompetent idiot’; piracy is a real threat; life at sea is hard; a boat can feel like a prison and that the reason the sofas in the cabins are perpendicular to the beds is so that you can sleep on them when the rocking gets so violent you are rolled out of bed (something which we were to experience sooner than we realised). We were also encouraged to start exploring the ship, with the engineering crew acting as guide whenever we went below decks, and were invited to come up to the bridge for tea and biscuits whenever we cared to.

t few days passed quickly and it wasn’t long before we woke up to find ourselves docked in Auckland. We had been warned about rough seas around New Zealand but our passage here had been almost eerily calm. A van met the boat at the port and took us to customs, where we flashed our passport alongside the crew and were then free to explore. Our friend Grace, who was currently living in Melbourne, had given us some maps and 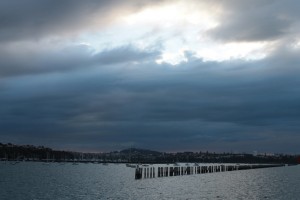 information on things to do around town which really helped us to make the most of our short time on shore. Keen to get as much exercise as we could, we walked to Mission Bay where we sat in a shoreside cafe and savoured the stillness of solid ground. We were due to be docked for 24 hours so enjoyed a full day and even had time in the morning to run back into town to get our hair cut and have a coffee. 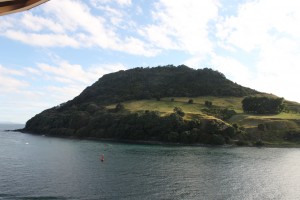 From Auckland, the Carelia sailed the short distance to Tauranga, where we arrived the day before Christmas Eve. Tauranga was refreshingly green and as we made our way into 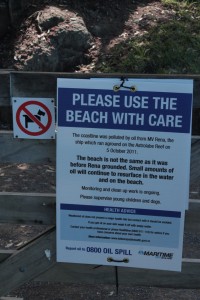 port with a couple of pilots, we passed the famous Mount Maunganui where sheep grazed contentedly on the hill. We were picked up by a very friendly customs driver who drove us through the sprawling port, passing thousands of logs which were mostly destined for China and Asia. He also told us that oil from the Rena was still washing up on the shores here (you can see the capsized ship in the distance from the mount), which served as a reminder of how damaging boat disasters are to the environment. Despite this, the number of huge cruise and cargo ships visiting Tauranga is apparently going up, and reaction to this is understandably split among the local population.

We only had until 5pm to get back on the boat, which was under orders to make headway back towards Australia as quickly as possible (we were unaware but there were storms brewing and the captain wanted to escape the brunt of them) but had enough time to walk around the base of Mount Maunganui. En route to the mount we walked through t 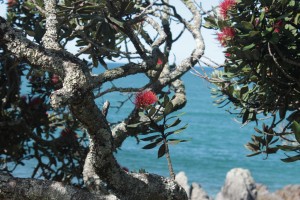 The coastal path leading to the base walk was near town but we were saddened to see the continued effect of the oil damage along way. Many of the rocks were tarred black so despite the inviting look of the water, it was still deemed too dangerous to swim. The captain and first officer of the Rena are apparently in jail, so the penalties for this kind of mishap are severe but with so many ships navigating popular trade routes such as this (in the Singapore straight vessels were literally back to back and side to side), it’s almost surprising that it doesn’t happen more often. 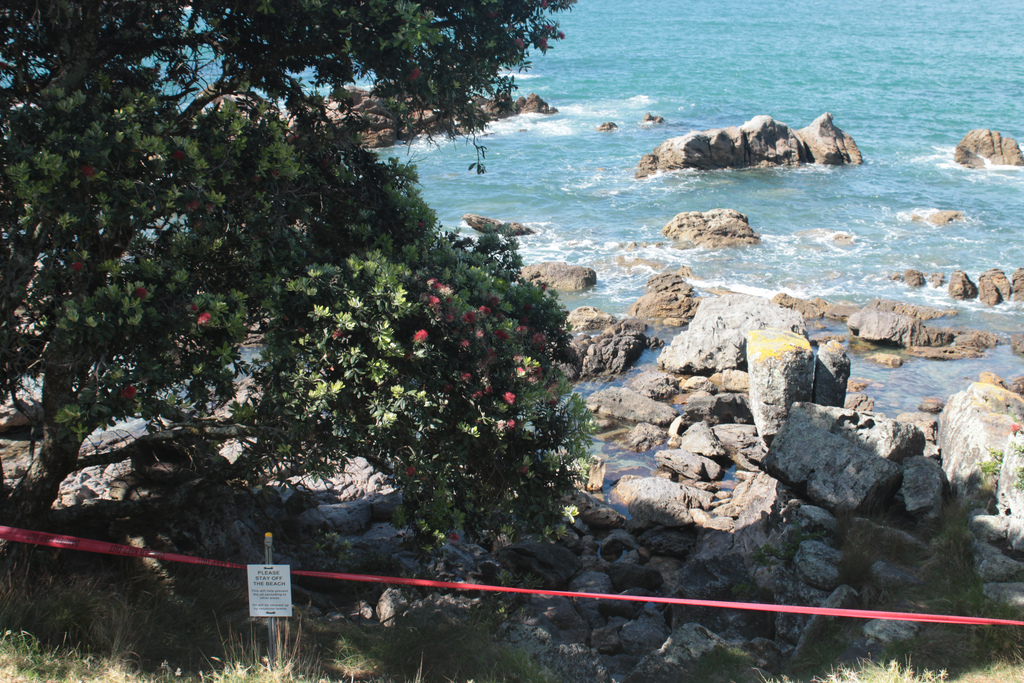 Despite the oil, the walk and the scenery were beautiful and we left Tauranga feeling revived and stocked up with chocolate ready for a Christmas and New Year’s on board.