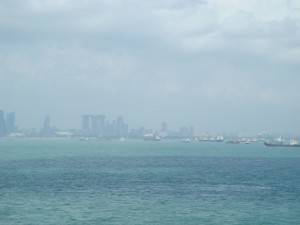 Our last day at sea was spent slowly crawling up the Singapore and Malacca straits. The Captain called us at midday to come and watch Singapore emerge through the heat and smog haze as a strip in the distance. The number of cargo boats and barges in this small stretch of water was insane and as we approached the area a thin strip of yellow smog surrounded us, which brought home the polluting impact of these ships. There are over 90,000 cargo ships sailing the oceans and seas of the earth at any one time, many of these still burning low grade ship bunker fuel 24 hours a day. This hit the headlines back in 2009 when it was revealed that one giant container ship pollutes the air as much as 50 million cars. The mounting industrial prowess of countries such as South Korea and China mean that plans for even bigger container ships are on the cards which seems like something akin to madness when particulate matter emissions from ship engines have already been shown to have contributed to the premature deaths of over 60,000 Americans and many others in Europe and South East Asia, not to mention its contribution to climate change.

It’s not all doom and gloom however; the International Maritime Organization finally got off the fence in 2010 and introduced a sulphur cap which will see sulphur in fuel reduced by 90% by 2020 which is in addition to the introduction of buffer zones (where emissions are controlled) around the US, Canada and it is hoped in Europe too. If these longer term 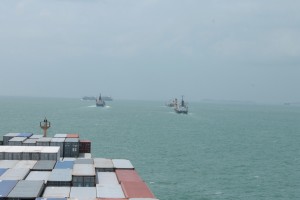 action goals seem frustrating however (which they do to me), there are some refreshingly different smaller scale projects (see B9 Energy group) on the go, which focus on the development of wind-powered cargo ships that are also commercially viable. The B9 Energy group claim that its ships can ‘deliver competitive freight rates and equal performance against schedules of conventional oil powered ships’ which could prove to be a very important show piece for those who don’t believe that efficient and affordable low-carbon shipping is possible. A group called the New Dawn Traders have also just set off from the UK on a slow cargo adventure of their own, where they will transporting Devon beer to France and Spanish olive oil to Brazil. You can follow their adventures here; and not to forget the Pacific Voyagers who we met earlier in our trip and are currently sailing their way from Mexico back to the South Pacific in traditional vakas. They have exciting plans to introduce sustainable, wind powered transport between islands in the South Pacific so it’s definitely worth checking out their blog. 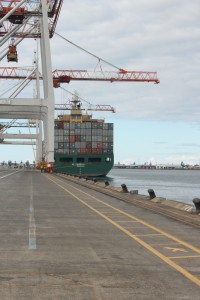 Back on the Carelia, our last night on board was spent packing and trying to reduce the weight and size of our luggage, which had slowly grown to epic proportions and desperately needed a diet. The seas were calm and at about 11pm we were able to tuck into bed for a few hours’ rest before immigration were due to board. The AS Carelia pulled into the container terminal of Port Klang in the very early hours of the 6th January. We were expecting an early wake-up to meet the port agent, but we instead got a call from the 3rd Officer to let us know that we could look forward to a lie-in as the immigration office, in Klang style, would not be opening until at least 9.

We had time for a quick breakfast before we said goodbye to the crew and finally stepped off the ship for the last time to meet a representative of the port agent who was to drive us to immigration. In an unusual arrangement for those used 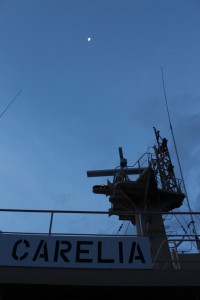 to airports and passenger terminals, it turns out that in order to get our passports stamped we had to leave the port and drive for a few miles to the back of a warehouse which looked remarkably similar to the Elephant and Castle shopping centre. Herein lies the the immigration department of Port Klang (though the sign for the adjacent department for the regulation of massage and alternative therapy was far more prominent).

Further cementing our belief that there really are very few tourists arriving this way, the man who had just driven us to immigration asked us to wait a moment before rapping on the roof of a chrome-plated sports car that had a man’s legs sticking out of its window. This it turned out was the port agent, Mr. Wen. He was friendly enough and did direct us through the passport control in an efficient manner (although we were the only people there so he didn’t have much directing to do). I think we may have been the first non-seamen and maybe the first male and female travelling couple that they had received in a long while, and we were presented with the lighter side of border control (lots of giggling and joking around with forms). In five minutes we were stamped into the country, if only our first hour on Malaysian soil could have been so easy…

When we left the immigration office we were offered a lift to our hotel for the steep price of US$50, which we politely declined as we wanted to get the commuter train into the historic Kuala Lumpur station. This was then swiftly countered by a demand for US$300 for ‘formalities’ from Mr. Wen. Our jaws dropped – in Malaysia this amount of money is a huge sum, enough to rent a nice flat in the city for a month and about the same as our travel budget for the whole of Malaysia. So now we understood how he was able to afford his pimpmobile car! After 20 minutes of haggling, we demanded to be taken to his office as up until this point we weren’t even sure if this man was a real port agent. After a short drive we stopped outside a row of dentists, doctors and surgeons practices which strangely also shared rental space with ‘The Trusted Name in Batteries’ electrical store. Our driver gestured to a room upstairs which, having no idea where we were, we approached with a certain amount of caution. Inside was a room with a computer and some files which did at least contain documents on shipping. We were shown email correspondence with the Captain of the Carelia, who it turns out had enlisted this company’s services as they are the Ahrenkiel groups normal go-to guys for this port. After a bit of debate, they showed us some of their competitors’ prices and it did indeed seem fair compared to some of the others. It turned out that this is the normal arrangement for freighter passengers, but it definitely caught us by surprise – a warning to fellow travellers – make sure you clear with your booking agent what the arrangements should be on the arrivals side or you could end up as confused as us. In the end, we were able to send the receipt to Globoship (the agent who booked us on the Carelia) for a reimbursement, which they dealt with quickly and helpfully. The port agents seem to be able to charge such ridiculous prices because to the wealthy, profit amassing shipping companies, such an amount is negligible and as a result, the port of Klang is a strange mixture of port workers scraping by and designer label clad port officials driving fast cars. 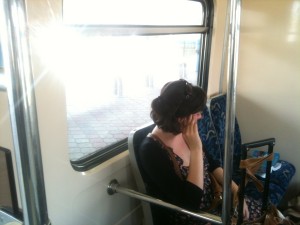 After our stressful experience at the container terminal, we made our way to Klang station to catch the hour-long Komuter train to Kuala Lumpur station (by contrast to the sum we’d just paid out, the tickets cost us $2 each). The train was air conditioned and the journey pleasant. After so long at sea we drank in our surroundings with intensity and watched as the jungle fringed railway line and corrugated iron housing began to give way to brick new builds and concrete as we neared KL. We also passed a newly built Tesco and a huge Carlsburg factory, the latest trophies in Kuala Lumpur’s commercial enterprise cabinet. We soon arrived at the impressive station building with its colonial-era, mosque-style frontage and interior. We trekked up the station steps to find an open kitchen with delicious Malay curries bubbling away in various pots and pans behind a screen. Tired and hungry, we pulled up two filthy plastic chairs from a stack and piled a plate with various dishes from the pots. 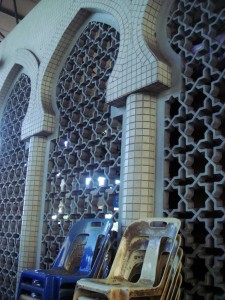 A steaming cup of Teh Tarik was then brought to us (a brandless Malaysian red tea served with condensed milk which takes the edge off any spicy curry). This was some of the best food we had while in Kuala Lumpur and the flavours offered an incredible introduction to the city. We also had our first encounter with an Asian toilet here (a hole in the ground and a pale of water instead of loo paper) but compared with the portaloos at Glastonbury they were more than civilized. We hadn’t even left the station yet and we were already falling for South East Asia.