Melbourne is well known for its magical laneways and street art, though city officials have not always embraced it as such. Various attempts by the authorities to ‘clean it up’ have all but failed and graffiti is now as much a part of the city as its beloved coffee houses. Hosier lane in the CBD is a perfect example, attracting tourists, photographers, sketchers, locals and most recently even bridal parties (it is one of the locations of the moment for wedding photographs so 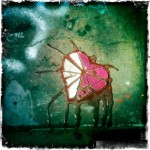 don’t be surprised if you spot a bride or two tottering down the cobblestones in their stiletto heels). Higson and ACDC lanes (yes, there is an ACDC lane) and Degraves Street are also alive and kicking with the works of many of the city’s infamous street artists. 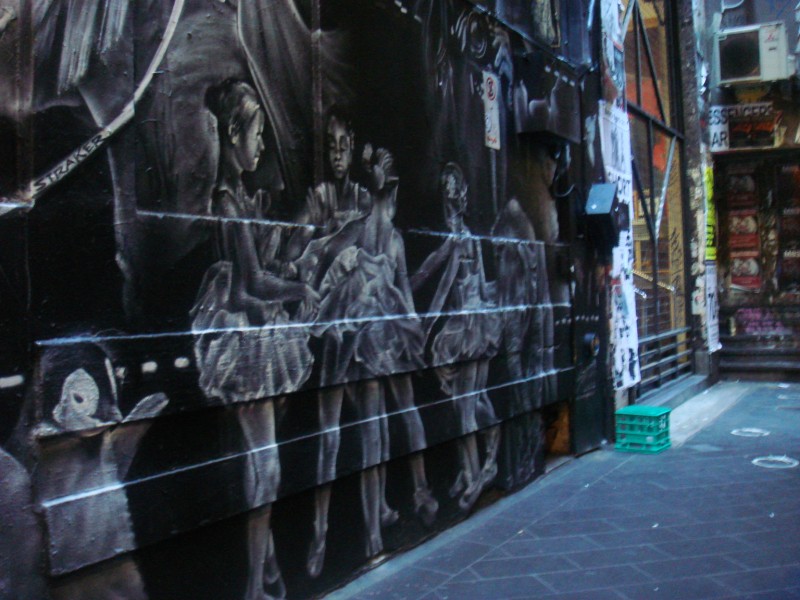 Just before we arrived, the headlines were full of outrage that Melbourne’s last Banksy 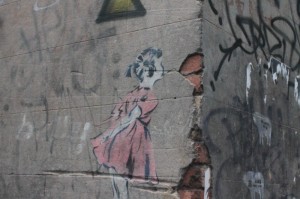 piece had been destroyed (despite having been protected by the council with a perspex cover) but the city’s street art scene is nothing if not democratic – no piece is sacred and every space is fair game. This is part of the beauty and allure of the street art: it is but temporary, a fleeting gesture which accepts its own mortality. No piece lasts forever and from the moment the artist has left the scene, their work is liable to tagging, enhancement or complete destruction – if not by fellow graffitiers then by the council graffiti removal van which is known for its speedy appearances at certain locations. 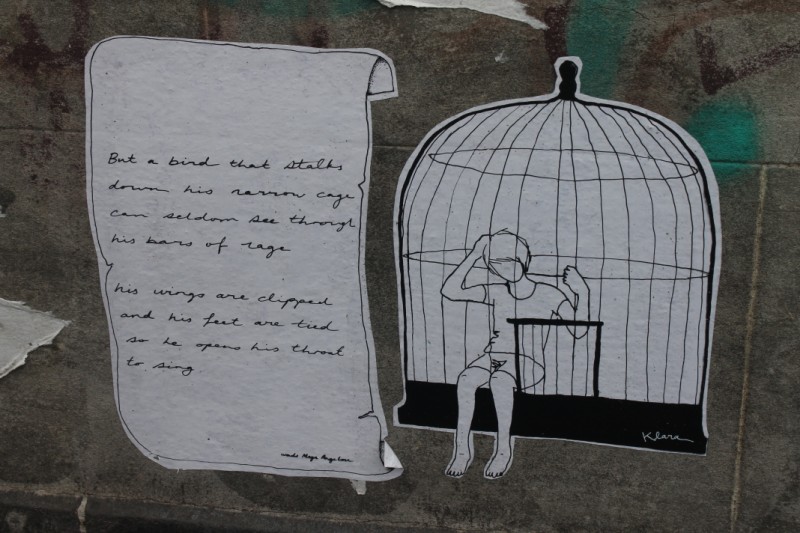 As with most things ‘Melbourne’, you have to catch them while you can. I first became drawn to the street art scene in particular when I came across a stall at the Rose Street Artists’ Market selling photographic cards of Melbourne street art. One pictured a graffiti paste-up of the head and shoulders of a small girl (whose paper torso had been torn away) against a white backdrop, with the words ‘Be Free’ stencilled to the side. I was enchanted by the image and when I asked the photographer where she took it, she said 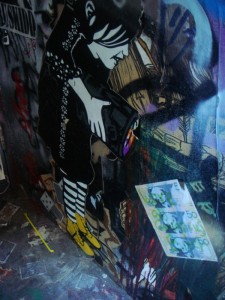 that the work was sadly long gone, having lasted no more than a few weeks. At home I decided to conduct some research of my own by typing ‘Be Free’ and ‘Melbourne graffiti’ into Google, which surfaced a few links to Flickr images of other inventive works by the artist, all of which featured the same gothic, Doc-Marten-boot-wearing character in Alice in Wonderland esque scenarios, many of which incorporated flying decks of cards. When I tracked down the dates, they were all taken 10 months ago or more and further digging resulted in my discovering that these artworks, too, were all long gone – not exactly surprising in a city prone to regular torrential downpours. 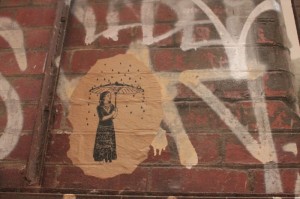 Finally, I came across the site of a German blogger, who had written a piece about whether the girl in the artist’s paste-up was in fact ageing and whether it was at all auto-biographical, but more importantly he had posted an link to a Facebook page entitled ‘Be Free‘. For some reason, I hadn’t even thought to look there, but there it was, the artist’s own page with up-to-date ‘wall’ postings, images and location hints to her latest pieces. I wrote down as many clues as I could in my notebook and the next day set off, to track down as many artworks as I could find. 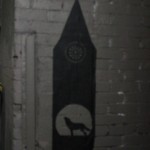 Luckily it was a clear, warm day when I started my search in Fitzroy, a favourite location for many a graffiti artist. Following clues pointed me to a ‘Grizzly Lane’ on Brunswick Street (which Google Maps had earlier suggested did not exist), however, using the markers I had written down earlier, I finally located a dark alleyway with the slogan ‘KNITTING KILLS’ scrawled above its entranceway and some plastic crates near the end. This turned out to be a ‘bring your own food’ coffee shop operating out of a garage called the Grizzly Café, so I now knew I was on the right track and a little more searching led me to the paint splashed spot: 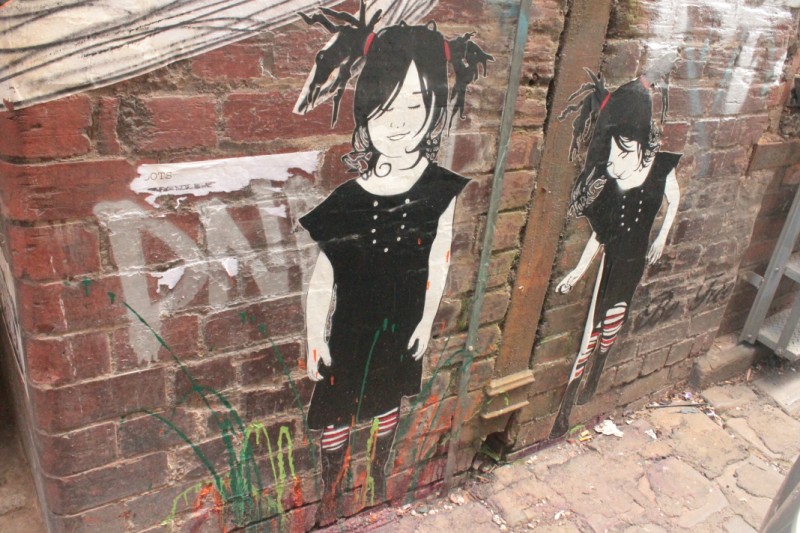 Several other nearby locations also had recent visits from Be Free and a walk up and down Rose Street uncovered more multicoloured rain pieces. My favourite, painted directly onto the back of someone’s shed in a lane off Rose Street, depicts the little girl crouching under an umbrella, sheltering from the bright, streaky rain. 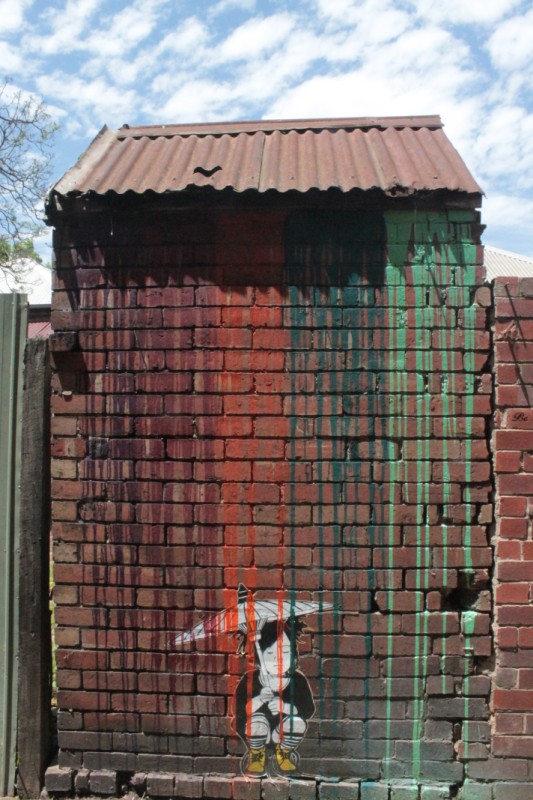 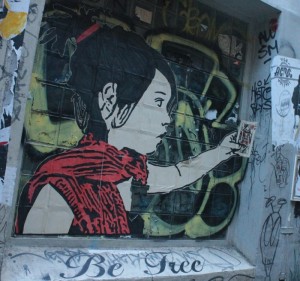 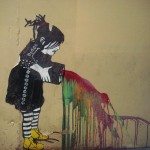 Helen, who is still in Melbourne, pointed me in the direction of the Degraves piece and continues to find more in Northcote and surrounding suburbs. I have since heard that pieces by Be Free and her friend Suki are being discovered as far away as Adelaide and Brisbane. The arts community here is refreshingly innovative,

resurfacing in new ways when it has been clamped down, while standing by and promoting each other’s work in the face of judgement, something which I think most people respond to. The inhabitants of Melbourne seem proud of its graffiti and quite rightly so. If a piece is genuinely creative and offers up 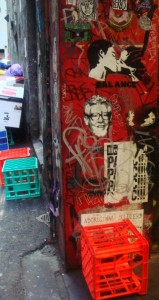 inspiration or witty social comment in some form or other, it will (on the whole) be left alone until it’s deemed to have had its moment. There are pieces at the end of Degraves Street, for example, which have been there for half a year now.

I soon started to spend any free time I had, exploring back streets, side streets, alleyways and lanes for more artwork. There was much to discover but some of the pieces which appealed to me the most shared one thing in common: they were all created beside or above rubbish bins. Not much will get me to stick around creaking bins of overflowing restaurant scraps, but these pieces did. 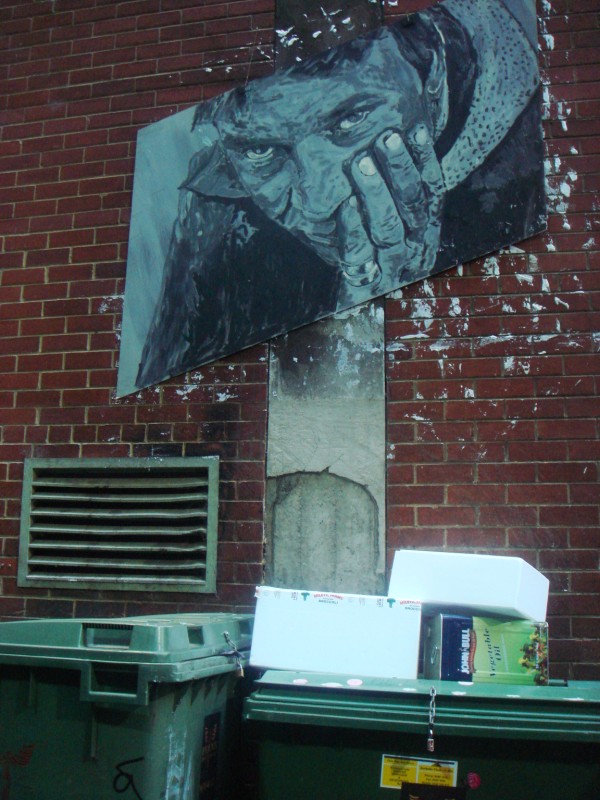 The creative output in Melbourne doesn’t end with its street walls, but extends to its 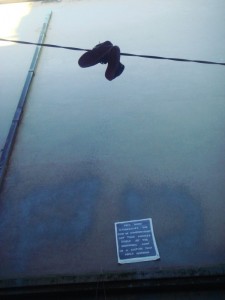 telephone wires (shoefitti) and its bike racks and sign posts (yarn bombing). Yarn Bombing is not

Melbourne-centric, but it is alive and well here as I found out when Grace, Helen and I went on a yarn trail around Brunswick and Fitzroy one very humid day. It didn’t take long before we came across our first, and then second and third (either on, or between, Lygon Street and Sydney Road). Helen later discovered that there are Yarn Bombing café meet-ups, inventively titled ‘Stitch and Bitch’, where you can swap techniques whilst sharing your latest project ideas. Yarn Bombers make it their mission to bring some colour and life to the drab steel surfaces which are found all around towns and cities and many tag their 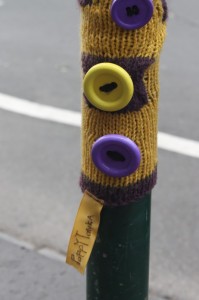 work with sew-on labels (using pseudonyms of course). Recent triumphs have involved yarn bombing one of Melbourne’s larger bridges with flowers, knitted bees and butterflies and a Nove 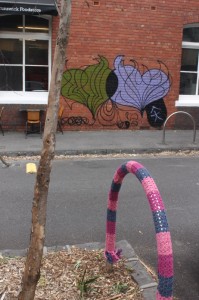 mber challenge saw one particular Yarn Bomber target a different city spot for every day of the month. One of these locations was just down my road in Fitzroy and was embraced by most people, but it clearly annoyed some – the two sides engaged in a battle of pulling the knitting up and down the pole (I personally preferred the days when it was up). Some of these crafty activities can be traced back to shops in arty places such as the Nicholson Building in the CBD (full of vintage fabric and craft shops, art galleries and a great poetry bookshop) and Cottage Industry in Fitzroy, who have crocheted lace cozies for the tree outside their shop. 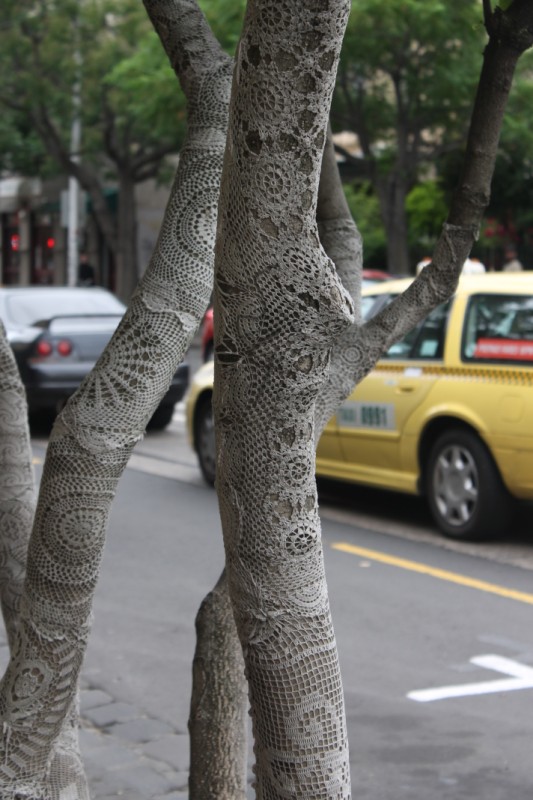 There is something joyous about these pieces, not just in the creating of them but in the discovering of them too. It evokes the sort of childlike excitement you feel when you have the freedom to discover and create for yourself, without caring what anyone else thinks. This attitude summed Melbourne up for me, it is ultimately a warm city which seems to invite you to join in, rather than putting up walls you must struggle to break down.

Tweet
This entry was posted in Travel and tagged Australia, Melbourne, Street Art. Bookmark the permalink.

4 Responses to Chasing Freedom and Yarn: Street Art in Melbourne