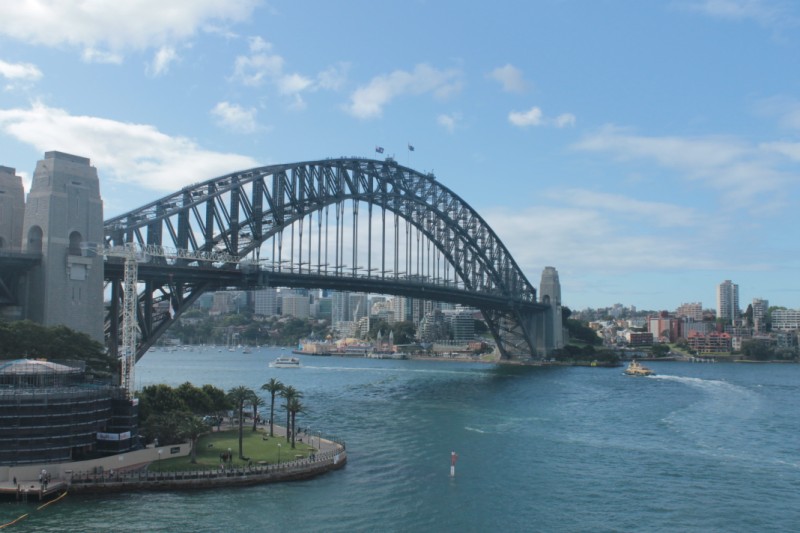 Leaving the boat for the last time was a strange, if not liberating, experience. Our YHA hostel was located very nearby, on the crescent of the hilly Rocks area of Sydney (which wasn’t climb up to while carrying so many over-packed bags). From the hostel’s rooftop it was possible to see Circular Quay, the

Opera House and the ship we had just arrived on. It was a little strange to see what had effectively become our home for the best part of the previous month fill up with new passengers, who we imagined had no idea of the huge distances the vessel and crew had travelled over the summer. Unlike the passengers on our voyage, these seemed to be mainly young businessmen and wealthy families, sipping champagne in the vicinity of large television screens, wired up to satellite TV in the upstairs eating area. It had been chartered for the Rugby World Cup and was due to leave for New Zealand later that day, carrying a full load of ticket holders who would also be sleeping on the moored boat in between matches. We decided to watch it sailing off as a sort of travel ‘rite of passage’ – it was only when it finally left the harbour that we felt truly detached from the American shores from which we had come from. 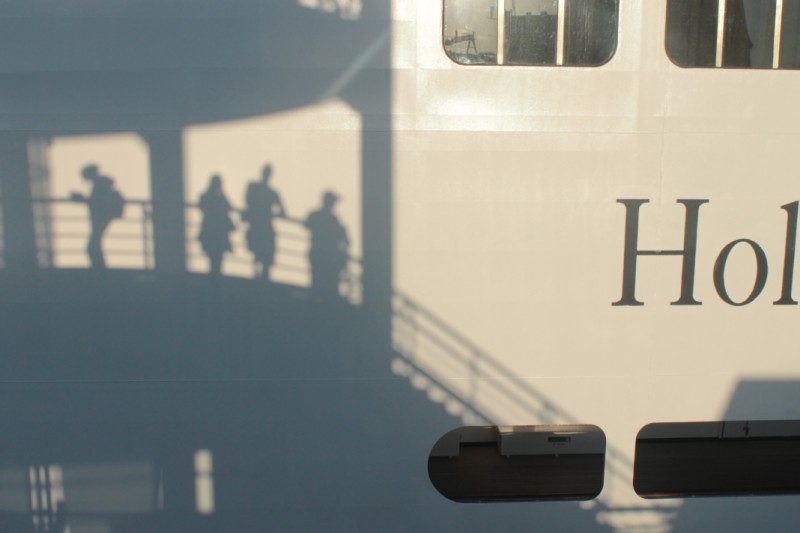 As it happens, we didn’t feel much nostalgia after the boat had disappeared from our sight and instead focused our attention on reacquainting ourselves with a life where we were 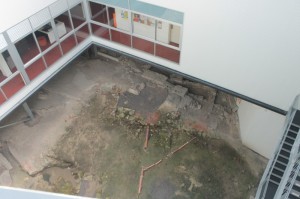 once again responsible for ourselves and our own explorations. The hostel was a good place to start, as it was also home to an archaeological dig site. Ours was one of a number of rooms which encircled the open space of the dig itself, where old drains, china and other fragments from the daily lives of the first European settlers are still being unearthed. The Rocks area surrounding us housed more of this sort of thing and was an interesting space in own right. As the entire Rocks area and most of the older buildings are owned by the council, the rent is cheap and the area plays host to a huge range of galleries, street art installations ‘pop-up’ shops (which change as often as once a month) and social space 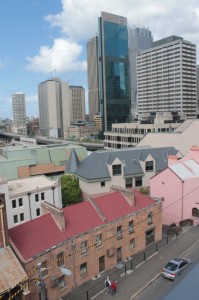 s, as well as the Rocks Discovery Museum. In the 1970s – check dates there was a proposal by a large consortium of property developers to ‘modernise’ The Rocks by bulldozing the entire area and erecting yet more skyscrapers, which the cash-strapped council opted to agree to. Of course, being the dawn of the era of privatisation, the people living and working in The Rocks, mainly dock workers and the impoverished, were not involved in the decision at all, despite the land and most of the buildings being under public ownership. In stark contrast to the fate of Canary Wharf or Elephant and Castle, the Federation of Master Builders was successfully able to boycott the 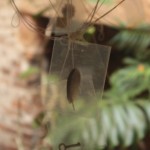 demolition works by putting ‘green bans’ on all the companies involved in the buyout attempt, and some of the last surviving historic neighbourhoods in Sydney are only preserved today because of their successful protest efforts. In the thirty years hence the old residents have slowly left the area, mainly due to old buildings being deemed unsafe and subtle ‘rezoning’ by the council, but the architecture is at least preserved and in contrast to the original plans, the public is able to benefit from a subsidised space for local creatives to make and exhibit their work. 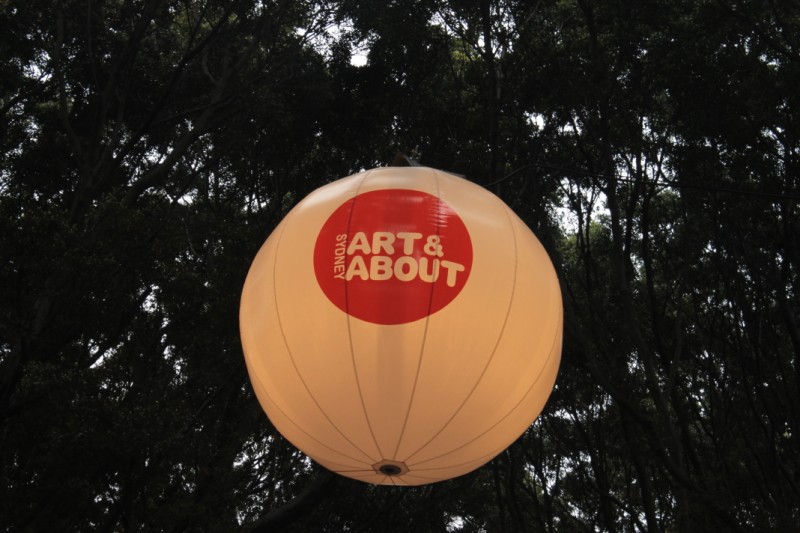 We didn’t venture into the CBD much and aside from the odd excursion, for example to post some parcels home, preferred to watch it from the fringes of the harbourside and the hostel’s roof terrace, where plenty of insight could be gleaned if you looked hard enough – especially on the rooftops: 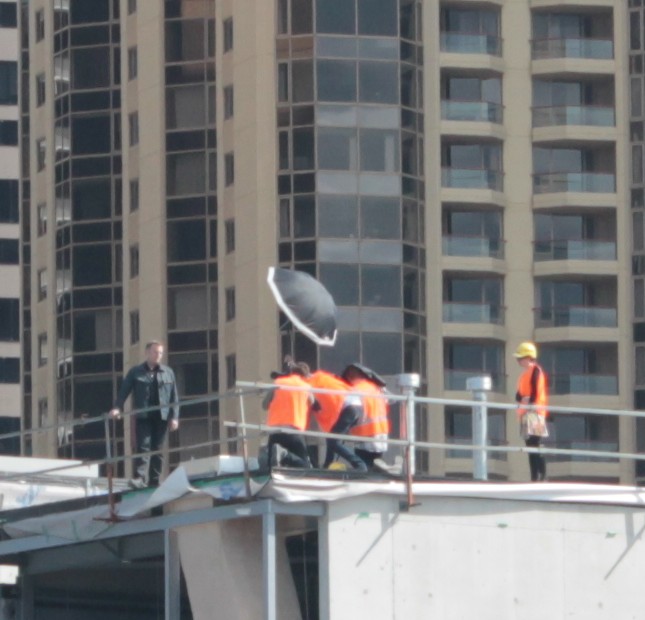 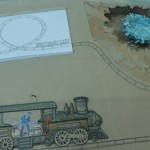 called the Red Room had a put on a display of an animated pop-up book, called the ‘Analogue Crusader’, at the old Customs House, which has been converted into a modern-looking library. We were also able to read a two-day old Guardian and some of the Australian newspapers to get back in touch with world events. 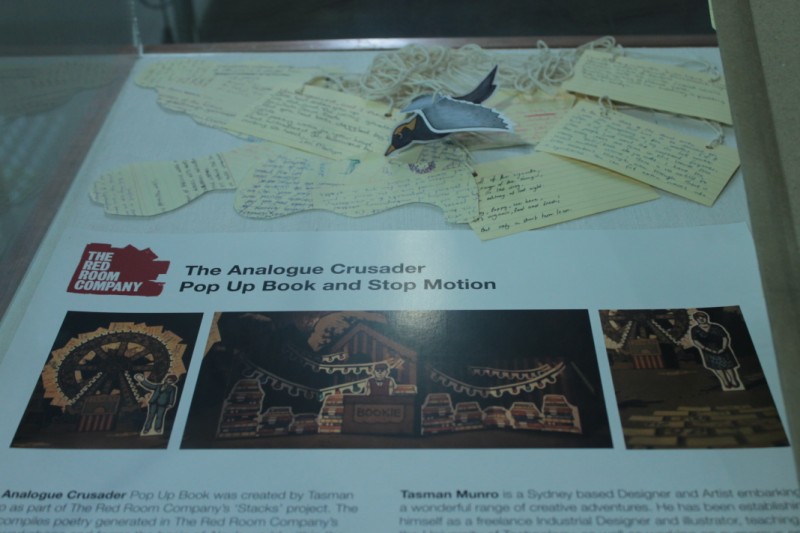 In other moments, we explored the beautiful (and free) botanic gardens, where we saw more fruit bats; attended a play at the Opera House (unsurprisingly, we couldn’t afford 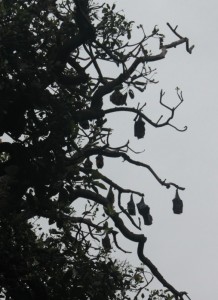 the opera); visited the Art Gallery of NSW, where we saw some interesting aboriginal sculptures, badly derivative early-settler art and an extremely neglected collection of Polynesian pottery at the back; and explored the ‘Art and About’ photographic festival offerings in Sydney’s Hyde Park. This was also where we heard, and subsequently glimpsed our first Sulphur Crested 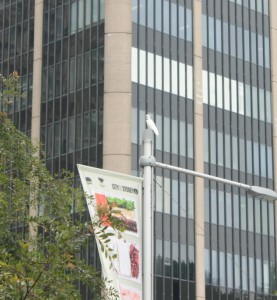 Cockatoo, which on first appearances looked rather like a barn owl while in flight and seemed just as uncomfortable as one might, perched on a city centre lamp post in the middle of the day. The bird’s shriek seemed prehistoric, and I have still heard nothing like it since. After about four days of exploration, we felt the time was right to find a more solid base for the next few months, and for this we decided we’d head to Melbourne. The Australian playwright David Williamson famously wrote, ‘No-one in Sydney ever wastes time debating the meaning of life — it’s getting yourself a water frontage’, and not presently needing or desiring water frontage, Melbourne it had to be. 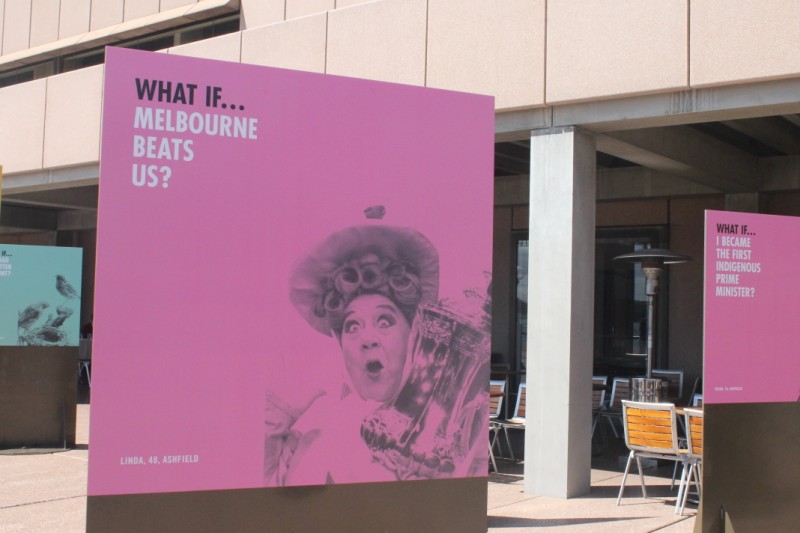