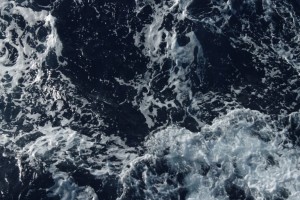 Twenty-three days at sea is a fairly long period of time to contend with, even when making the odd stop along the way. Although we tried to introduce some sort of routine, it was often difficult to maintain in the face of creeping nausea. The Pacific, like all seas, is temperamental and the calm blue waves can darken and grow in a scarily short time, which led to the odd bout of head-over-sink seasickness. 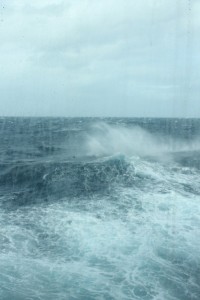 Even as we began to find our sea legs, our eyes began to adapt to the motion of the waves and in turn began to superimpose that motion onto our surroundings, so that the very grain of the wooden deck appeared to swirl and move as if it were quicksand rather than a solid surface.

It didn’t help that we also kept hearing the call ‘Bright Star, Bright Star’ followed by a location on the ship, which we later found out is code for someone being taken seriously, if not mortally, ill. I wonder if the code has any connection with Keats’ poem of the same name, which ends with the line:

‘And so live ever–or else swoon to death’

The newsletters of the cabin opposite ours began to pile up in the last two weeks and we wondered if it might have had something to do with one of these loaded calls.

In an attempt to stop the maudlin thoughts we were starting to have, we tried to re- focus our attention on 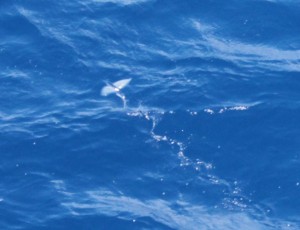 instead searching for signs of life outside the boat, but sightings were few and far between. The sea itself, markedly different to the Atlantic, was a brilliant blue (most of the time) – the sort that invites you to dive into it. About two weeks in, near the stern (or the ‘pointy end’ as some called it) of the ship, we began to spot flying fish, who 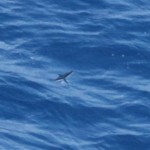 would skitter away across the waves to escape our approaching swell. It became our mission to try and photograph these fast-moving fliers, which was far more difficult than it sounds. After about two weeks of poor results, we managed to get a couple of decent-ish shots, which helped keep our minds occupied in between watching films, reading, playing tennis and eating.

During the 23-day journey, we made three notable sea crossings – from the North to the South of the equator; across the international date line (where we lost an entire day) and through a number of time zones. We changed time zones no less than six times (which included one for daylight savings in Samoa), turning the clock back a civilized hour each time, which adds up to a lot of lie-ins! We crossed the equator on Tuesday September 20th, and it was quite hilarious to watch people standing on deck with their legs akimbo, wondering whether they might have one leg in the South and the other in the North. The same thing happened with our crossing of the International Date Line, where we crossed straight from Saturday September 24th to Monday September 26th, thus never experiencing a 25th day – though some people tried their best by changing their positions on the deck to see if they could briefly claim a couple of seconds. The crossing of the equator also brought with it the traditional ‘Equator Crossing’ sea ceremony, where sailors who have never crossed the equator by sea before are initiated into Neptune’s Kingdom via a bizarre court set-up, presided over by the King of the Sea himself. New sailors are given a truth serum (traditionally made up of ketchup and shaving foam) which is smeared all over them and followed up with an obstacle course in the pool. Though we undoubtedly saw the tame version, sea vessels of all kinds (including freighters, navy ships and smaller boats) take the ceremony quite seriously and tasks can become something akin to sports or frat initiation rites at university. After the events, all successful new recruits are ‘rewarded’ with a certificate granting them entry to Neptune’s realm (but more importantly, meaning they never have to go through the somewhat humiliating initiation again)!

2 Responses to Life at Sea