Feeling sick on the Ocean waves

Our boat was scheduled to leave from the port of Long Beach just outside of LA, which is a strange place, with an atmosphere somewhere in between that of a theme park, a failed beach resort and a film studio. It is dotted with attempts at tourist attractions, the most famous being the Queen Mary I which is now 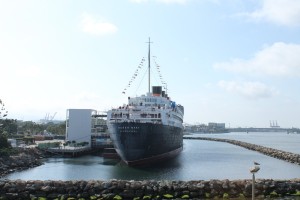 a floating restaurant and hotel, perhaps in an attempt to draw people to an area where the beaches have ‘stunning’ views of offshore oil rigs and the water quality is clearly not the best. It also reportedly suffers from some of the worst air pollution in the US, thanks to a combination of ship, dockyard and oil refinery fumes. Amongst all this, the boat terminal itself looms out like a somewhat futuristic depiction of a space shuttle station (a sort of planetarium or Crystal Maze style dome construction).
Surprisingly, there was no queue to board the ship and after putting our bags through a security scanner and quickly signing a couple of forms at the port reception, we were on the gang plank, boarding the ship (another huge ocean liner similar to the Queen Mary II in many ways but with slightly more 80′s decor). 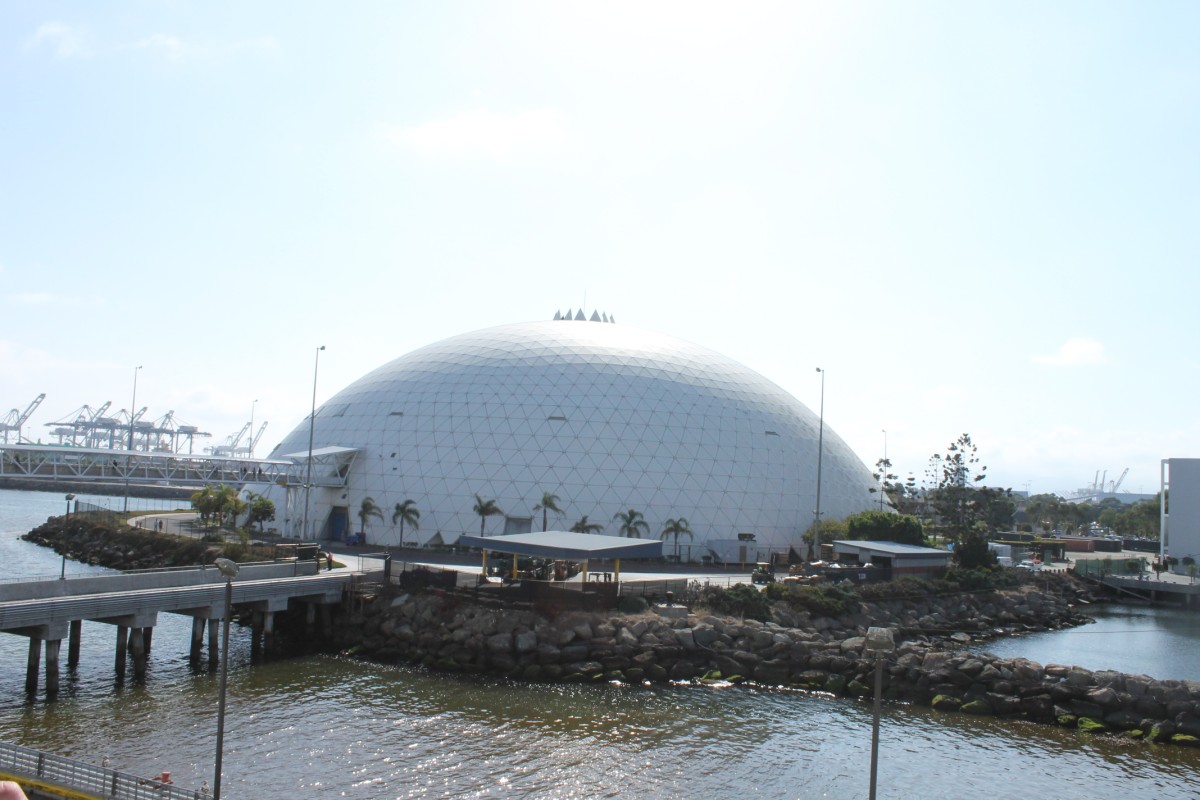 Our cabin was on the lowest deck available to passengers but we did have a port hole which was nice (we later found out that the majority of the ‘service staff’ have cabins on the two floors below ours which have no windows because they are actually under the water line – and with some on board for a year or more, I couldn’t help but think about this often). Our small but adequate cabin was to be our home for the next 23 days so we tried to settle into it as best we could. There were lots of guest entertainment sessions planned for the evening of departure, probably to encourage everyone to make ‘friends’ but feeling anti social, we watched the coast line of the US from the top deck until it disappeared before watching a film back in our cabin. 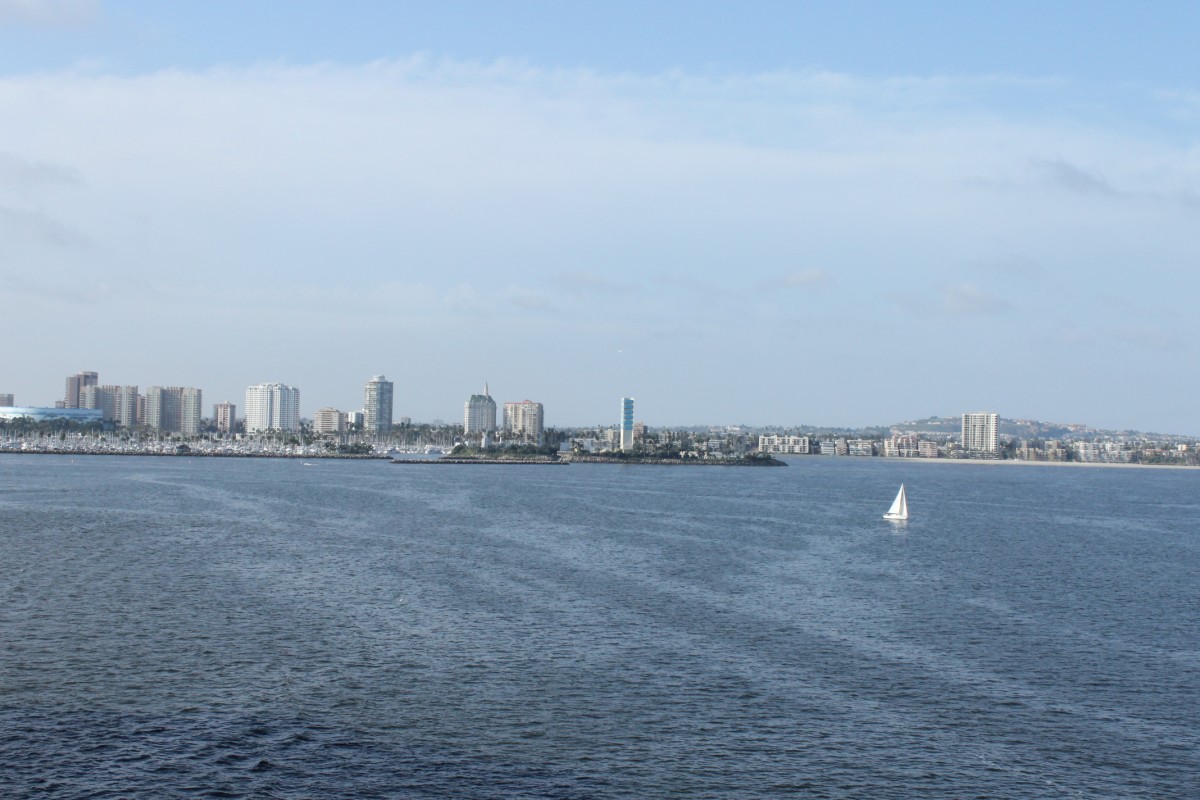 This cruise liner was more relaxed than the QM2 with more informal nights than formal and a generally more casual atmosphere.  We still didn’t fit in though and struggled to get used the gaudy surroundings, mountains of food and the service side of it all (the staff of which were nearly all Filipino and Indonesian). They were all 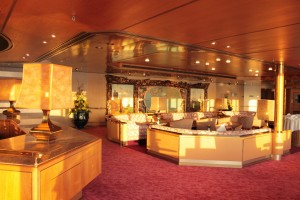 working very long shifts again and some were not going to get home to see their families for another year so we found it quite an uncomfortable and difficult experience at times. One of the crew who we became friendly with had a wife at home who had given birth to their first child three months ago and he hadn’t yet been able to get home to meet his son for the first time, nor would be back for the next six months at least. I have since read that crew going overboard from these massive cruise liners is also a regular occurrence, some seeming to have jumped and there are many other stories online relating to low wages and the drudgery of life on board for the service sector crew (particularly those in the galley and the out of sight positions). Though it is perhaps worth mentioning here that all of the crew who we spoke to on the Volendam (from the hotelier to the buffet staff) did confirm that all tips they received were in addition to pay and were also being allowed off the boat to visit the ports of call on a rota basis. Some also had happier to stories to tell regarding meeting their now husband/wives on board or working alongside friends/family from their own towns and villages back home. On some evenings the pool was also closed off for staff pool parties and so while things were undoubtedly tough, Holland America do seem to be a little more progressive than other lines in this way at least.

The first five days at sea were hard, mainly because although we were both enjoying being back at sea, we were not loving the on board experience. I actually began to feel 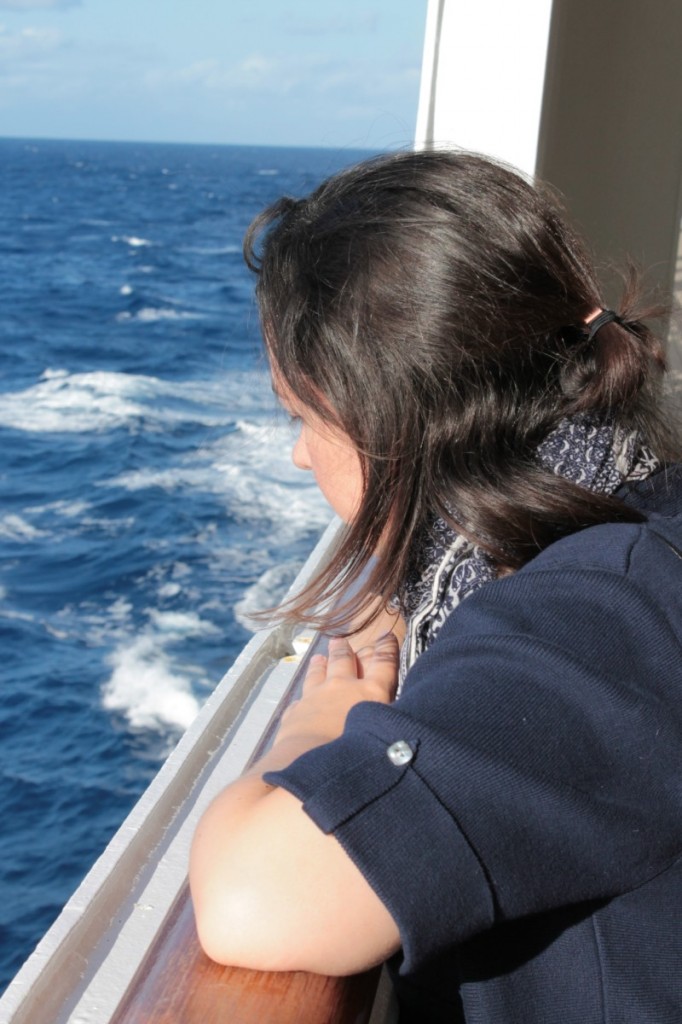 quite depressed and as I began to delve deeper into the environmental issues surrounding cruising (see next post), thing seemed bleaker still. In the back of my mind, I always had suspicions about the underbelly of the cruise industry and neither Alex or I would ordinarily have ever even considered taking a cruise but the new aims of our journey sort of blinded me into seeing it as viable way of getting from A to B while also enabling us to visit the South Pacific islands along the way. Due to the slightly rushed circumstances under which we left, we had not been able to save as much money as we would have in an ideal situation and the trip as a whole would only work if we were able to get somewhere where we could get a bit of work sooner rather than later. So all things considered, this really was the only viable transport option for us at the time – apart from flying. By about the third day of feeling miserable, we were both questioning whether this was really worth it (should we have flown instead?), especially given the 20 long days still ahead. With my thoughts going round in endless circles, I attempted to pull myself out of it (for the sake of my sanity and Alex’s) by taking up jogging, tennis and planing copious amounts of film watching from the very impressive free DVD library available. The choice of films was actually very good and the programme of lectures and cinema screenings on the horizon were also a nice surprise – with visiting lecturers on board presenting a range of travel, historical and political talks alongside some interesting documentaries. 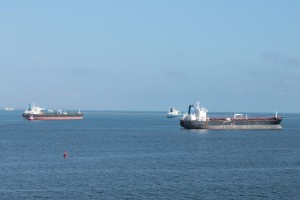 get on in our lives, so although the days seemed long, they would be over soon and we would never have to do it again. We decided to salvage what we could from the experience by focusing on the islands we would get a chance to briefly visit. It also gave us a new and pressing aim – to secure freighter passage for onwards travel from Australia, which by all accounts online (the Lonely Planet forum describing it as the holy grail of sea travel) was not going to be easy.

Tweet
This entry was posted in Travel and tagged South Pacific. Bookmark the permalink.