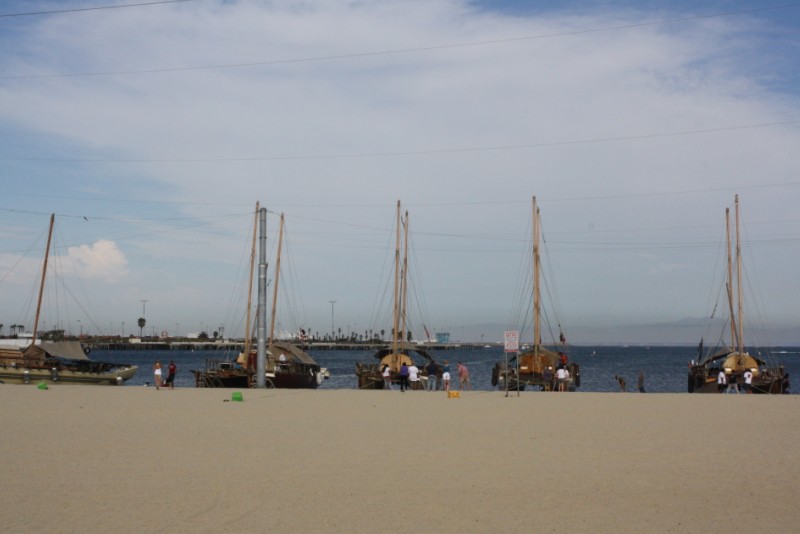 On Cabrillo beach, near the yacht club and port of San Pedro, the Pacific Voyagers had moored up their seven Vaka Moanas on the beach for a short break before their onward journey to San Diego. These were the same boats we had see 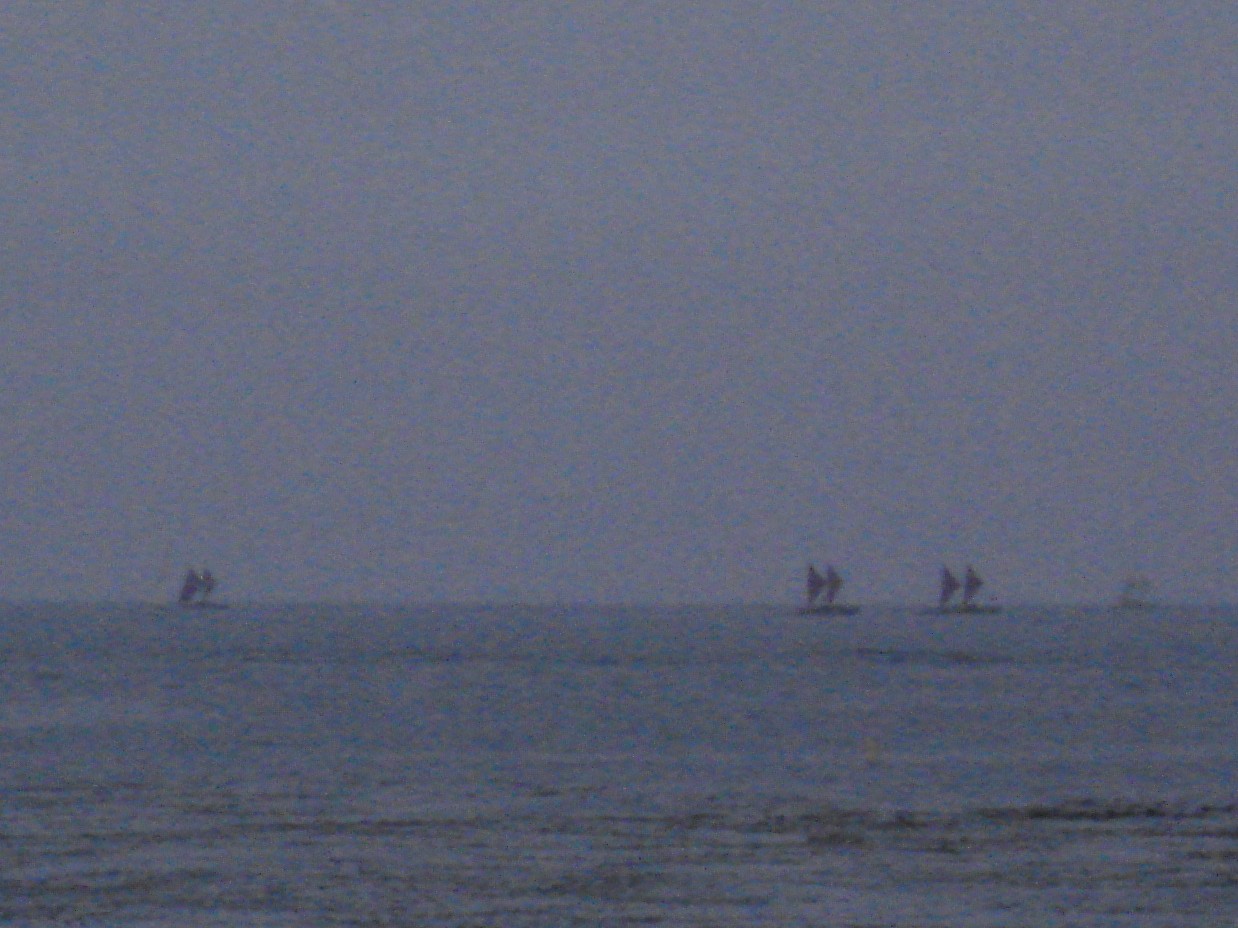 n in dot form sailing out of Monterey Bay a couple of weeks earlier, guided by their two red triangular sails (of traditional Polynesian origin). This time the sails were down, as the boats and their crews were enjoying a rare land break (when they weren’t picking up litter from the beach) before the official ‘welcome ceremony’ due to take place the next day. This was great for us because we got the chance to talk to a couple of the boat crews and were lucky enough to be able to board their vakas for a tour.

The project and their journey is nothing short of incredible. Back in 2008, Dieter Paulmann, the founder of Okeanos – Foundation for the Sea, spotted a vaka (the word for a traditional voyaging canoe or vessel used by South Pacific islanders) from the Cook Islands 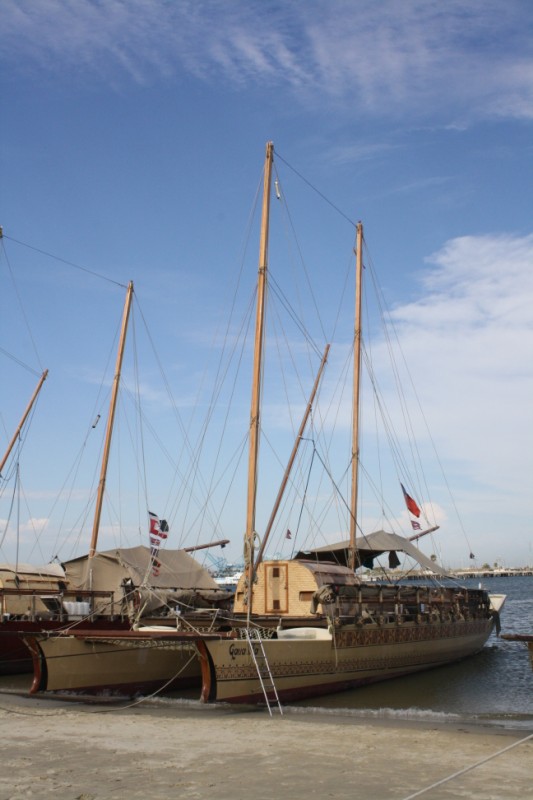 at the Festival of Pacific Arts in American Samoa and was inspired by it. He had been spending time with scientists, learning of the increasing changes that were taking place in the ecosystems of the Earth’s Oceans and was becoming increasingly saddened by the destruction that was taking place due to over-fishing, rising sea-levels, plastic debris and fossil fuel contamination. Ocean dead zones, acidification and noise pollution were just the tip of this problematic iceberg but instead of dwelling on this unwelcome news, Dieter looked to do something proactive. The vaka sighting came just at the right time and jumped out at him ‘as a metaphor and symbol for a sustainable, respectful life and relationship with the sea‘ and so the Pacific Voyage was born, a project which would aim to ‘bring back the traditional culture and wisdom of their ancestors into our modern world‘.  The plan would be to sail from the South Pacific to the US and back, using only the power of the wind and sun and other traditional methods of Pacific voyaging. In doing so, the crews (from several different South Pacific islands including New Zealand, Fiji, Samoa, Tahiti, Kiribati, Tonga and Hawaii amongst others), are aiming to spread the message of the need for stewardship of our oceans as well as ‘to strengthen our ties with the sea, renew our commitment to healthy ecosystems for future generations, and to honour our ancestors who have sailed before us‘.

‘We followed our ancestor’s design, but incorporated more sustainable materials to lessen the impact on our environment. Fibreglass hulls replace timbre to protect our forests and we’ve added eight solar panels on the back of each vaka to power our engines. Natural gas is the only fossil fuel used, which is employed solely for cooking. Like our ancestors before us, we use no running water.’ 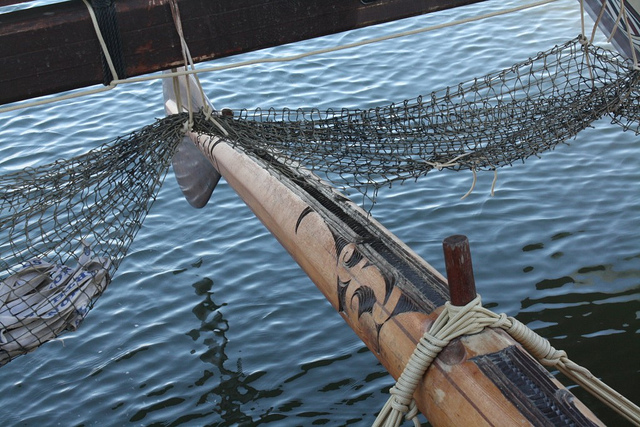 The vakas left New Zealand back in April 2011 and reached US shores by July. We caught up with them in late August when they were looking forward to their winter break in San Diego (due to last from the beginning of September to mid January 2012). Their eventual goal for part II of this epic voyage is to reach the Solomon Islands in time for the Festival of Pacific Arts by late June/July 2012 but they first plan to sail via Cabo San Lucas, The Cocos Islands, the Galapagos and then onto several destinations in the South Pacific including Fakarava, Tahiti, Bora Bora and Raiatea. All the crew are keeping blogs of the experience here – as one blog post read – ‘ the voya 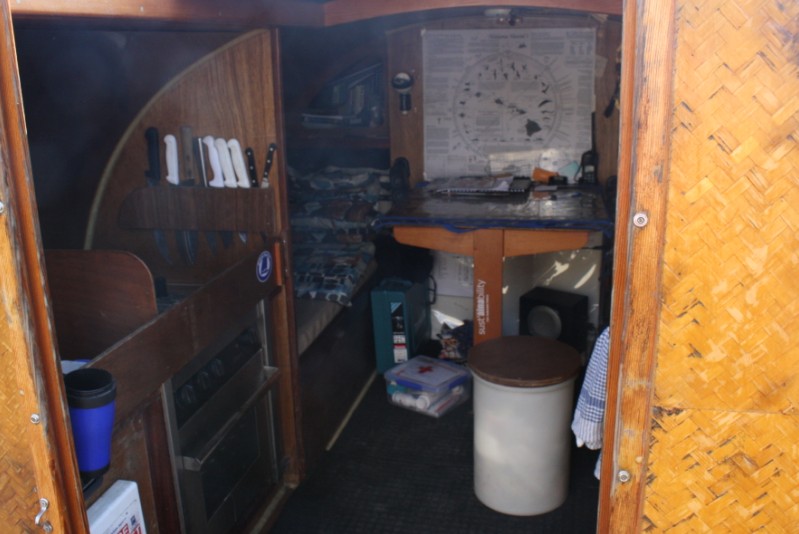 ge on the ocean is also a journey within, dealing with the fluctuations of our minds as much as with the outer waves and winds‘. The crews that we met seemed a lot happier and ‘together’ than some of those who have sought to revive ancient sailing methods in recent years. The crew on the 1976 voyage of the Hōkūleʻa, which famously featured in a documentary film ‘Voyage of the Hōkūleʻa’, released the same year, were barely speaking to each other by the end due to underlying tensions and crew/navigator conflict. Not so here it seems. The cabins on these vakas were almost as small as those on the Hōkūleʻa but were well equipped and had a cosy rather than claustrophobic feel to them. The beautiful traditional carvings of the vessels were counter-parted by electric solar panels on the back which produce the energy for on-board electronics including, most import 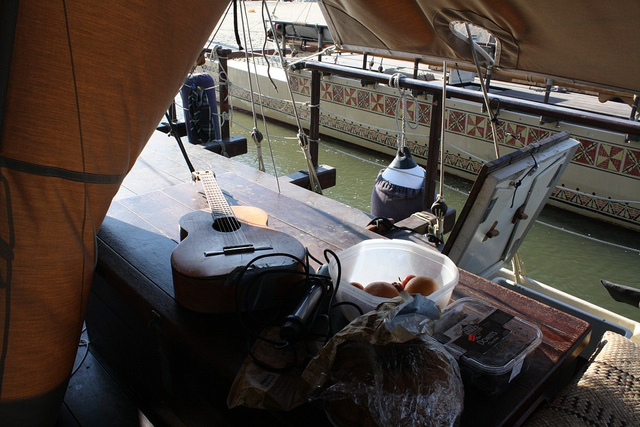 antly, the radio and music player! Food variety was mentioned as a downside (tins of spam are a diet staple) but crew camaraderie, shared goals and democratic practice on board seem to keep spirits up. Guitars and other instruments were also strewn around the boats along with gifts that the voyagers had received along the way (including some stones and rocks which are considered sacred by many islands) as well as flowers and a baseball cap, which was the gift of choice while I was on board.

We asked the voyagers about the use of traditional Wayfinding techniques which the ancient Polyniesians used to navigate (the methods for which were passed down to many modern voyagers by Mau Piailug or ‘Papa Mau’ and Nainoa Thompson, who learned from Mau).  Traditional techniques include: using the stars as a compass (the Sidereal compass), and the Southern Cross to determine latitude; utilising the taste, temperature and direction of the water as indicators (a sort of saltiness compass); analysing the sunrise and sunsets and being aware of the birds, fish and animals around you (certain species of bird, dolphin and fish feed out at sea at dusk before returning to lagoons near land at nightfall – Mahi Mahi, Red-Footed Boobies, Terns and Frigate birds are some examples) and so following them or at least observing their direction of travel can lead you to land. The Pacific Voyagers were journeying out of the South Pacific so while some were trying their hand at traditional Wayfinding they also had GPS, AIS and other modern equipment on board as backup and I don’t blame them – I wouldn’t want to sail a Vaka through a storm! 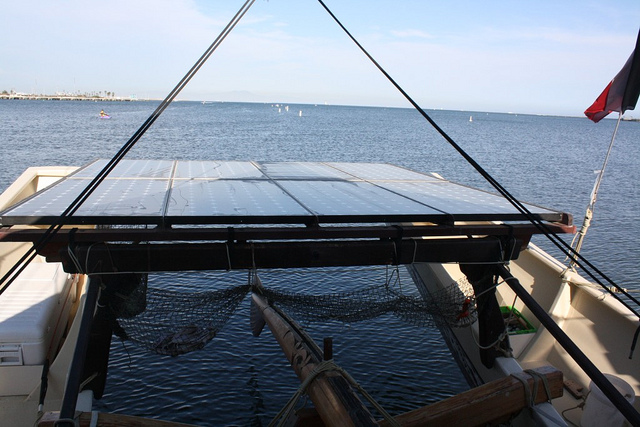 We found the voyagers and their journey really inspiring and the project doesn’t stop here as there are some interesting spin-off schemes in the works. One which particularly interests me is the ‘Vaka Motu’ collaboration which aims to provide as many Pacific Islands as possible (particularly the smaller ones) with a vaka of their own. The idea is that each island community will be in charge of assembling, maintaining and operating their own vessel which can then be used as a form of sustainable, zero-carbon transport from island to island. It is hoped that this will especially benefit the more remote island communities by opening up new employment and economic opportunities through tourism via a sustainable means.

The project is still at the prototype stage so sadly won’t be up and running in time for us to benefit from this form of low-carbon travel but anyone interested in finding out more or donating to the project can contact: [email protected]