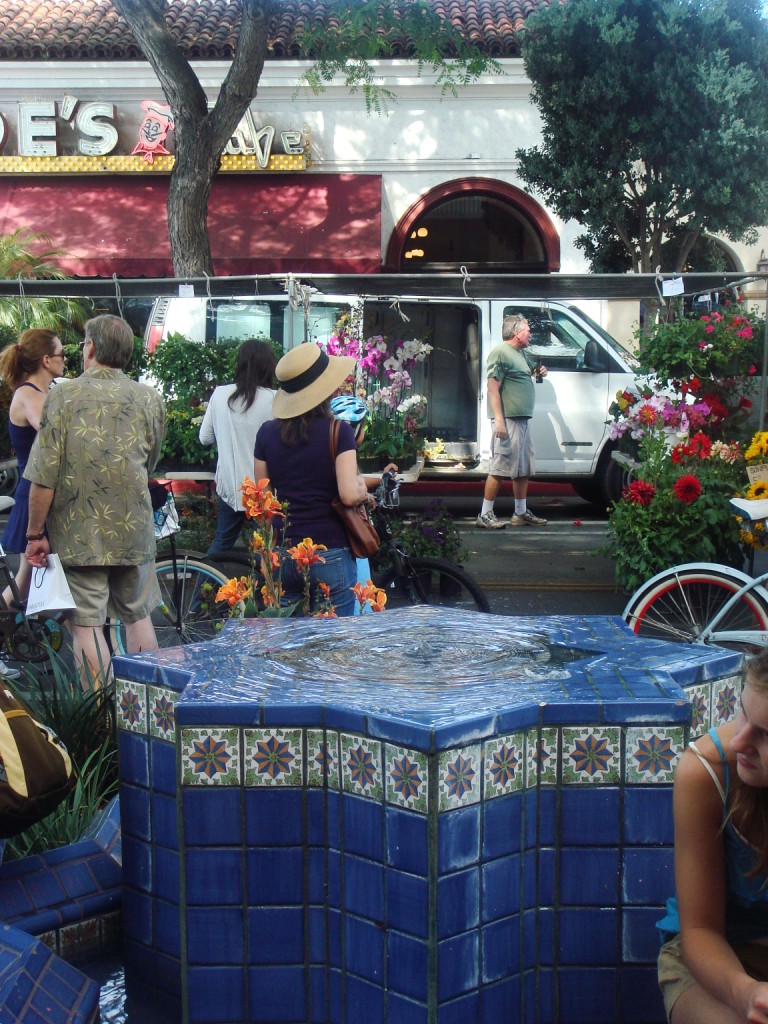 Leaving behind Morro Bay and its rock, we made our way slowly further south to Santa Barbara, arguably one of the last relaxed oases before you hit the urban jungle of LA. Santa Barbara prides itself on its smart, chic – with a hint of refined Spanish tiling – appearance. Hostels are not the order of the day here (cheap not being a word in the SB vocabulary), so much so that the only budget accommodation near the centre which dares to put the word ‘hostel’ in its name is right next to the train line. I shared a bunk with my friend Julia in one of the small rooms there about five years ago and was woken up every night by the headlights, horn and rattling of the freight and Amtrak trains, so I thought it best to give that a miss this time around. Instead we booked into a quaint little bed and breakfast in the suburbs just to the north of town. Our room had a warm, woody feel and the palm tree swaying just outside the window completed the Californian picture. 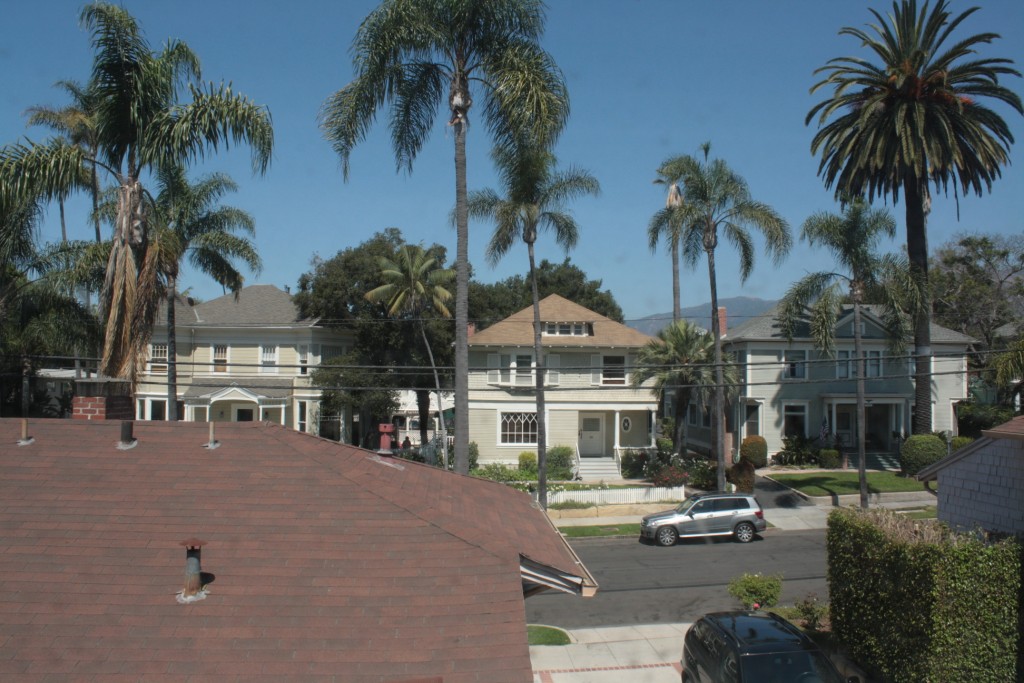 A short walk away in main town Santa Barbara, the unified façade of the smart, Spanish Colonial Revival tiled shop fronts and 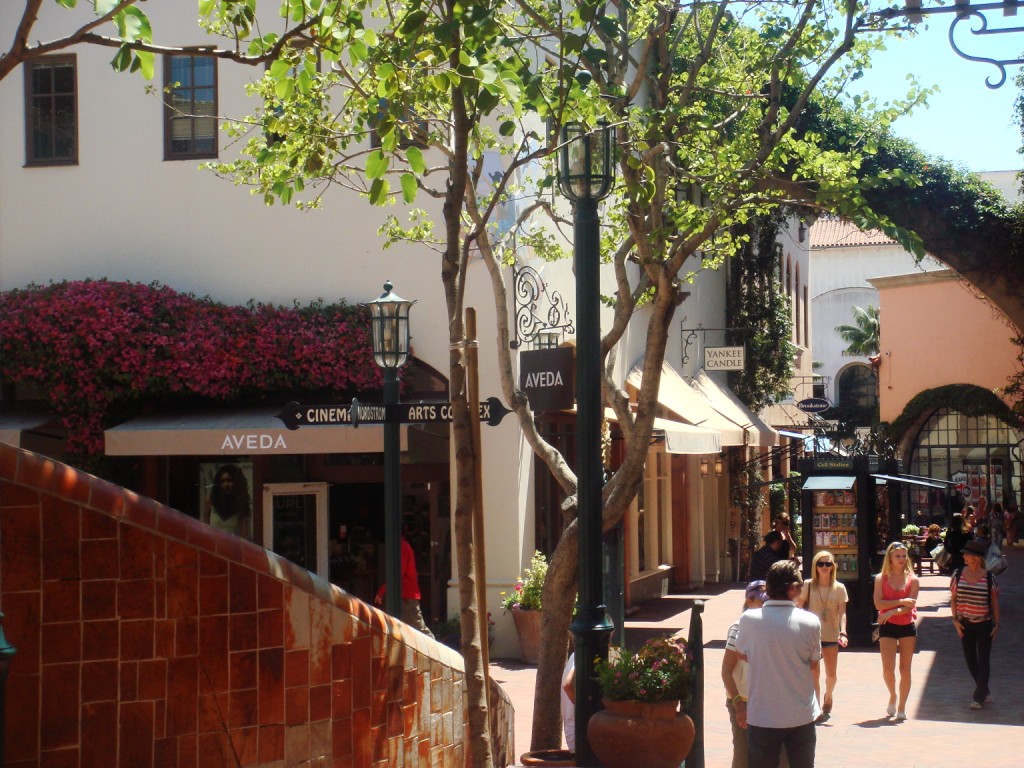 restaurants began to seem a little deceptive over time. We noticed a return ‘with a vengeance’ of the Chain Store along the main street (designer stores abound). The side streets contain a plethora of small, independent stores and cafes, but the town centre is awash with the usual suspects who can afford the high rents. These invasive species may be dressed in the local style but they serve to mark a sea change which heralds the beginning of the slow descent south towards Malibu, LA and Orange County where money will get you everything you think you want. 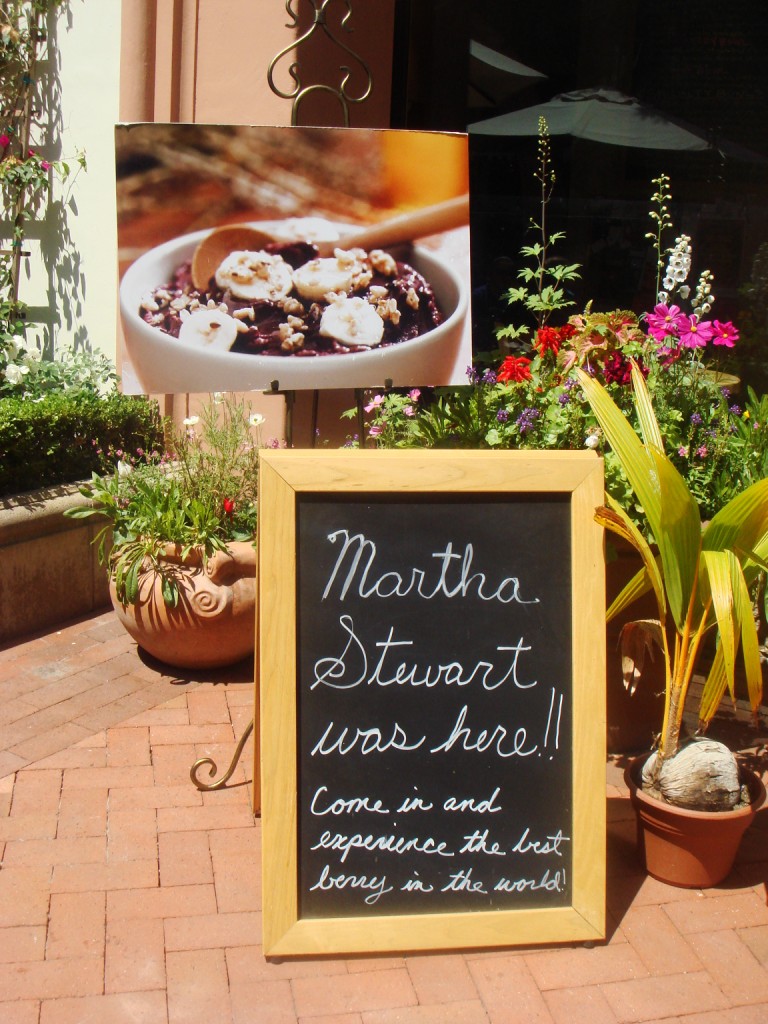 Considered by many as the playground of estate agents, wine connoisseurs and LA weekend-breakers, Santa Barbara is also home to many environmentalists, bohemians (who have since made a buck or two through the art and property scene) and protesters 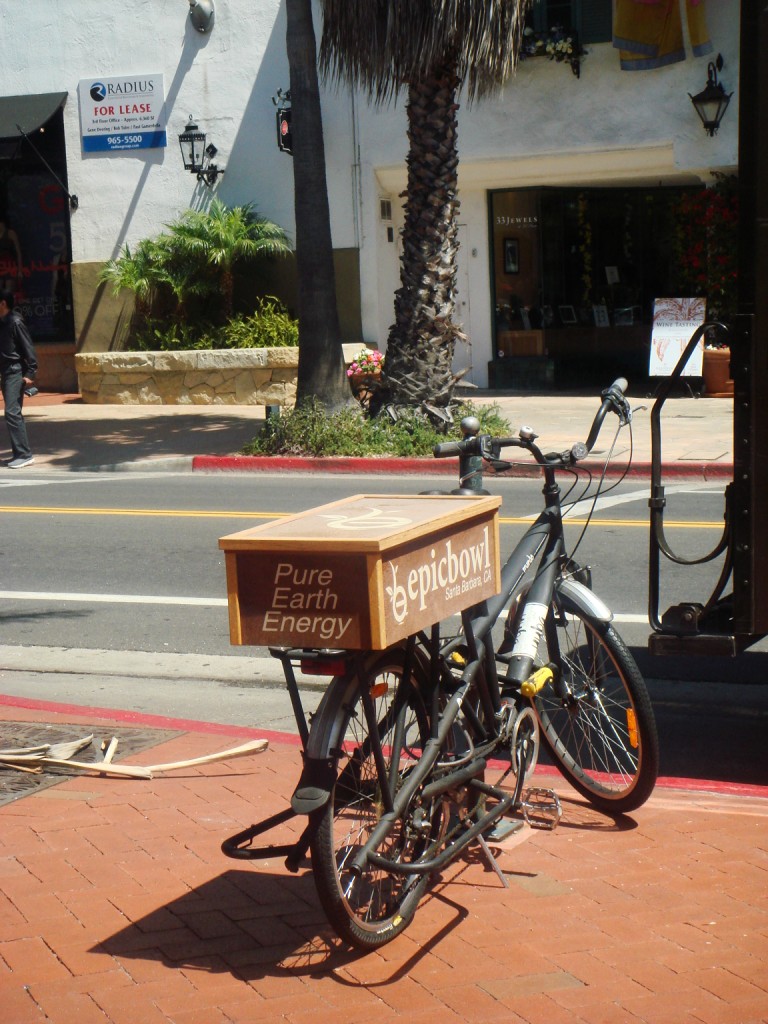 (not that any of the aforementioned list is mutually exclusive of course). Groups as diverse as the Tea Party and the Occupy movement have made Santa Barbara their protest ground, highlighting that this is shared home turf for people who are ideologically worlds apart. Whatever the focus of the protest, the right to be able to do so is an integral part of the Santa Barbara ethos (anti-oil, anti-war, animal rights, school dress code and university-related protests have all taken place here in recent years). Individual protesters have also become part of the regular Santa Barbara scene – some sitting on benches along the main street daily, striking up conversation with anyone who seems interested (a ‘down with evil’ banner attached to a flowery bike which moved from fence to fence while we were there was a feature that 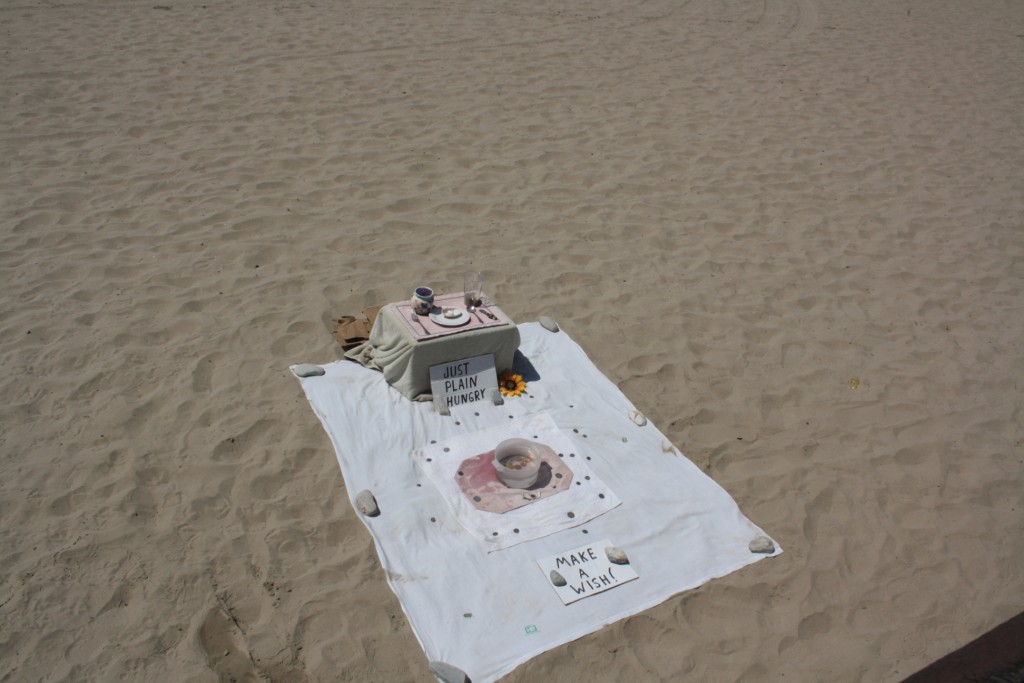 made us smile). Down by the beach, things take a slightly bizarre turn with what has become locally known as the homeless carnival – those sleeping rough on the beach use their blankets during the day to set up inventive coin tossing games to encourage people on the pier to part with their change. This is apparently more effective than busking and perhaps with a recession on, people are beginning to appreciate a little better what ‘being down on your luck’ feels like.

Despite its Riviera sheen, Santa Barbara has not escaped the pressures of recession. Our host Marie told us that the dented the property market, for one, has meant that many people are not living the ‘high life’ they had become accustomed to any more. Instead, there is a movement back to thinking and acting less LA and more Lo-cal. For every mainstream shop on the high street, there is an equivalent independent cafe, bar or shop to be found in the side streets. There are also weekly local produce markets as well as the beginnings of a local skill bartering scheme. Marie’s son teaches Yoga and apparently sometimes gives free lessons in return for ‘credit’ which he can use on services from others signed up to the scheme – reminiscent of the way things used to be before our reliance on currency. It’s been really great to note the number of inventive, proactive schemes such as this we have come across throughout our Californian trip so far. 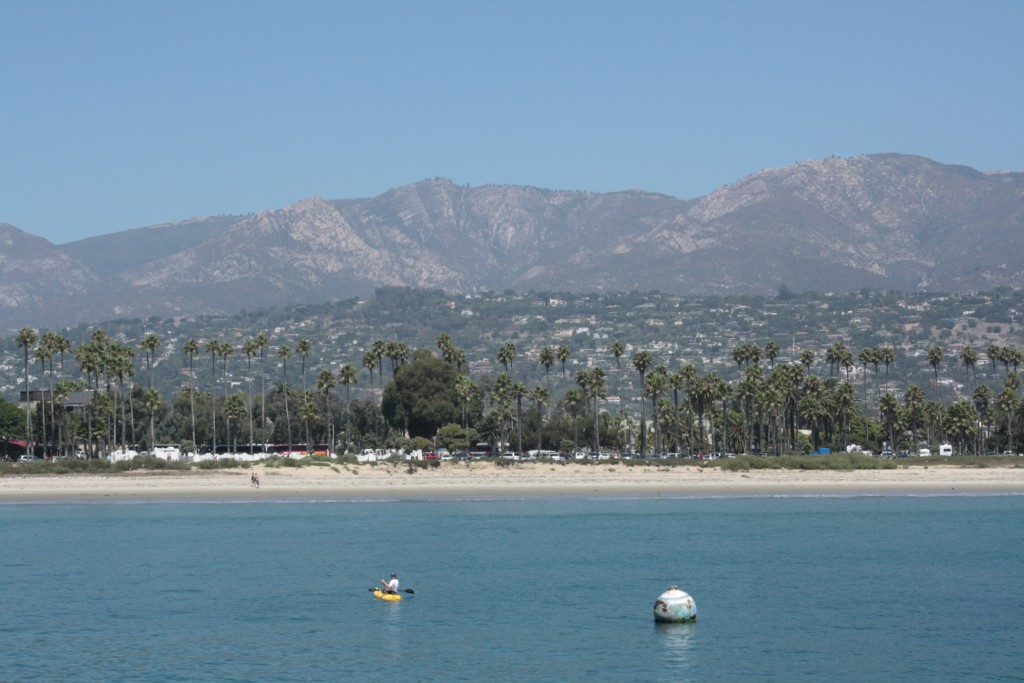 Santa Barbara was an interesting experience overall. The highlights: Marie’s gorgeous home-made breakfasts at the B&B; finding an international food store where we were able to procure that which is both the holy grail and dark destroyer of sandwich spreads – Marmite; discovering ‘Plum Goods’, an inventive local store which supports ‘resource revival’ by stocking a range of creatively recycled (sorry, up-cycled) items including watches made from bike parts, paints made from fruits and notebooks made from old homework diaries; and finally, going for our first proper swim at a ‘hidden’ beach accessed by a path just off the railway track a little way down the coast. The low point: caving in and watching ‘One Day’ – it never was going to be as good as the book was it?