After initially getting lost, and driving up and down the same main road in Cambria more than a few times, we finally found our hostel tucked away down a quiet road in the 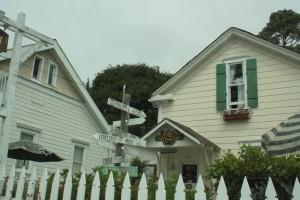 ‘East Side’ of the village, next to a church. Although part of the Hostelling International clique, the hostel was in an old colonial-style slatted house with a very homely atmosphere. The people running it were great and would often leave out freshly baked bread, granola or pies which made a fantastic change to our usual diet of peanut butter bagels. Like most HI Hostels, sustainability is the notice-board buzzword of the moment, but here I got the impression that they really were interested in how they were running the inn. Lid-sink toilets 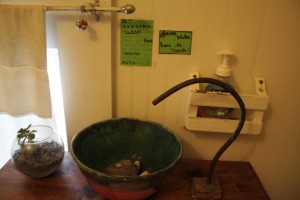 (prettifiied in a Cambrian way with shells and stones) had been installed, biodegradable soaps and detergents were used (and provided in the showers), laundry water was used for yard irrigation, solar panels had been installed on the roof, food was composted, plastic/glass recycled and there were even goals for future improvement which included: house roof insulation; using more locally grown produce/products and acquiring more bicycles and electric scooter rentals. 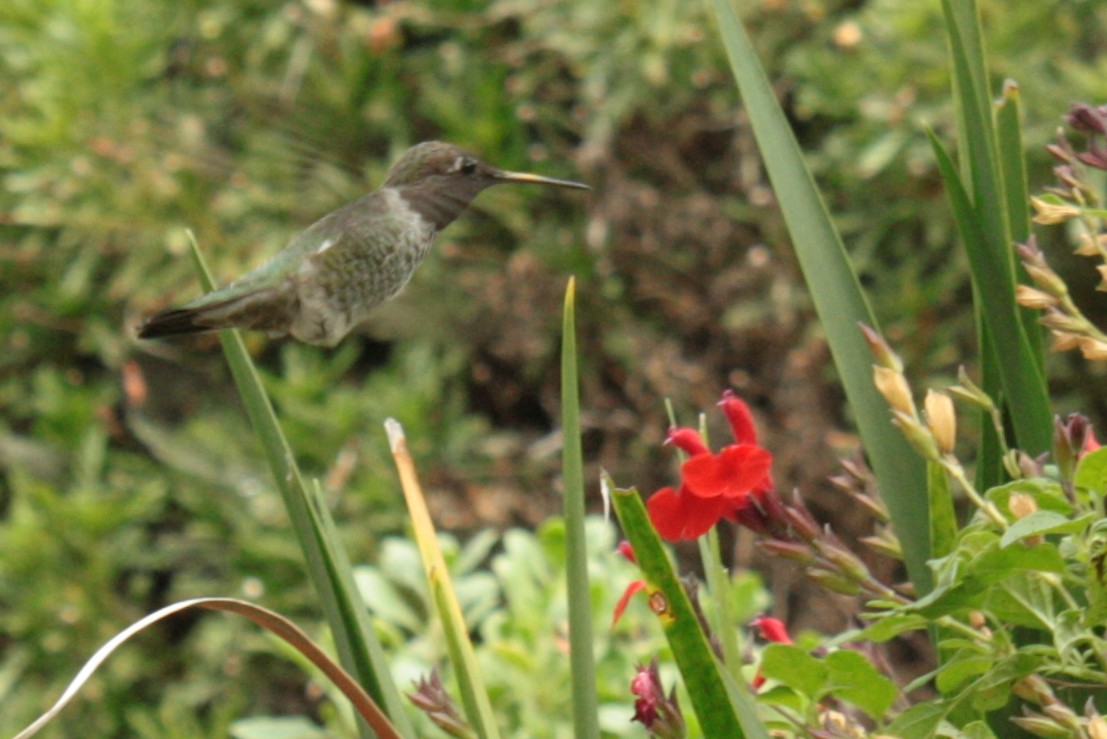 The garden buzzed with the sound of hummingbirds, and chickens pecked around the 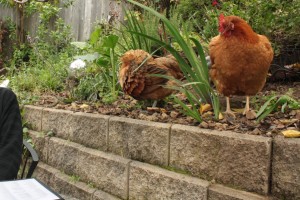 front garden or clustered around the back door in the morning wanting to conduct an inspection of the kitchen before scuttling off to the English ‘Tea Cozy’ cafe next door to hoover up cake crumbs. Without getting too carried away, the place was quaint, relaxing and charming. The sitting room was conducive to conversation, with a large dining table and arm chairs and we got to know some of the other guests over dinner (such as the lovely Alexandre and Katherine from Montreal) which was a nice way to wind down in the evening.

Walking and cycling around is encouraged in Cambria and it was great to leave the car behind and walk to the local farmers’ markets and farm shops (Linn’s Easy as Pie Cafe is a must-visit, if only to try the mysterious Olallieberry Pie). The Cambria Farmers’

Market was also particularly fantastic and most of the locals that we spoke to around and about chose to shop there rather than at a superstore. Making the most of the food samples, I became slightly addicted to the caramelised walnuts from the nearby Mount Olive Organic farm (luckily, they were very nice about my one too many trips to their table). They also had a great selection of other produce on offer, so in an attempt to steer away from fatty 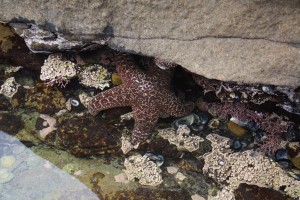 oils for a while, I stocked up on some fruit instead. Mount Olive doesn’t use chemical pesticides, herbicides or fungicides but instead use their own earthworm casting (the worms gradually release nutrients and inoculate the soil with healthy bacteria and fungi, stimulating plant growth), their own compost, EM (Efficient Microbes), and old-fashioned farming practices to produce what they call ‘the best’ and I couldn’t really argue with that statement (their peaches, nectarines and apricots were 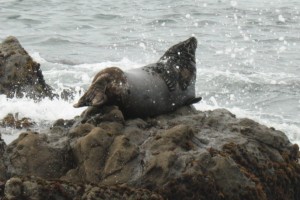 magnificent). We did occasionally stop obsessing about non-peanut butter related food long enough to explore the local beaches and in particular their tide pools, which were crammed full of star fish, anemones, urchins, abalones and hermit crabs. A nearby Harbour seal seemed to enjoy being splashed by the surf while Oyster Catchers darted around trying to avoid it. Although the weather was pretty grey, it was a peaceful place to recharge. 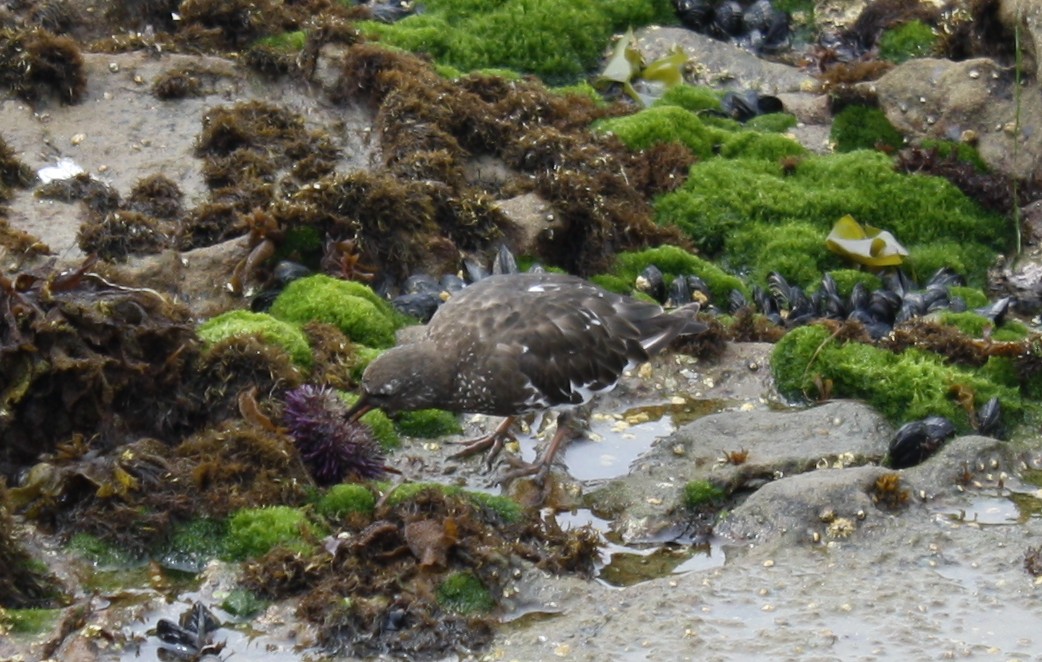 On beaches a little way up the coast at San Simeon, tiny tide pools and harbour seals were replaced by colonies of massive Elephant Seals. These were the first E-seals (as they later came to be known thanks to the local ‘E-seal news’) I had ever seen 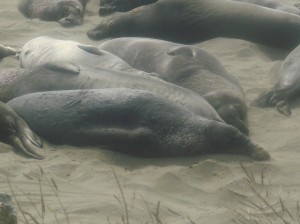 and this particular group were huge, blubbery males who had come ashore to molt. Many had scars and tissue wounds from recent minor spats but it was too hot while we were there for any serious altercations and most of their energy was instead being diverted into keeping cool, by spraying themselves – and any unlucky creatures who crossed their path – with massive amounts of sand.

Just above San Simeon but seemingly another world away, stands Hearst Castle, a sort of European-inspired Disney land built by the newspaper magnate William Randolph Hearst on ground he used to camp on as a child. It’s an oddly magnificent place but it’s the stories of its inhabitants, both permanent and fleeting (from Charlie Chaplin to William Churchill and a whole lot in between) which were really captivating. To ‘earn’ their visit, Hearst decre 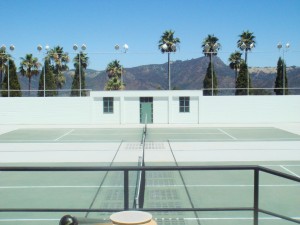 ed that all guests must dress up and perform a play for him during their visit – some of which are briefly shown on a film screened in the ‘castle’ cinema. By all accounts, Hearst was something of a puppeteer and he certainly built the sets from which to pull the strings. From Spanish-style villas and Romanesque baths to modernist tennis courts and medieval halls, it is definitely worth a visit (and you may spot a zebra or two, descendants of those which used to form part of Hearst’s on-site zoo, but are now free to roam the plains that surround the crazy settlement).

After a few days in Cambria, we decided to stop off for a night in Morro Bay, just to see 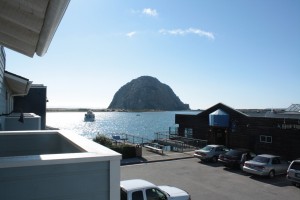 the famous volcanic boulder rock. The people we were staying with used to climb and camp on the rock as kids, but today you can only walk the base of it (the reason given that it is a protected falcon nesting site). The harbour in front is alive with pelicans, sea otters and very noisy sea lions. As dusk fell, the enormity of the rock (as well as the level of noise from the 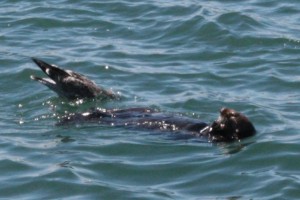 sea lion colony) seemed to grow against the background of the sunset. Despite being a working fishing and factory town, the rock seems to continually draw in tourists to the Bay: as one (stoned) guy told us, ‘I come here to feel the “prehistoric beauty” of the mound’. As the sun set more people gathered at the dock – whether to watch the fading light or indulge in a little rock-worshipping, I don’t know – but whatever you’re into, California certainly never fails to entertain. 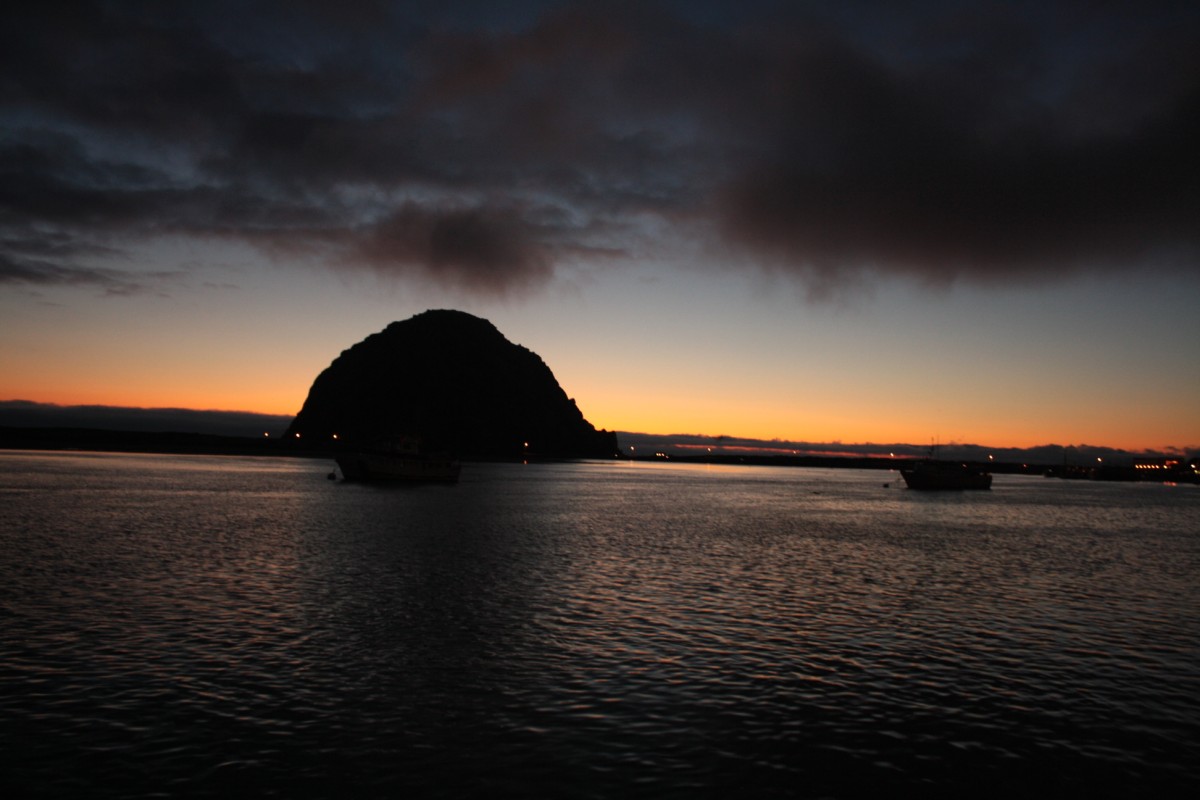