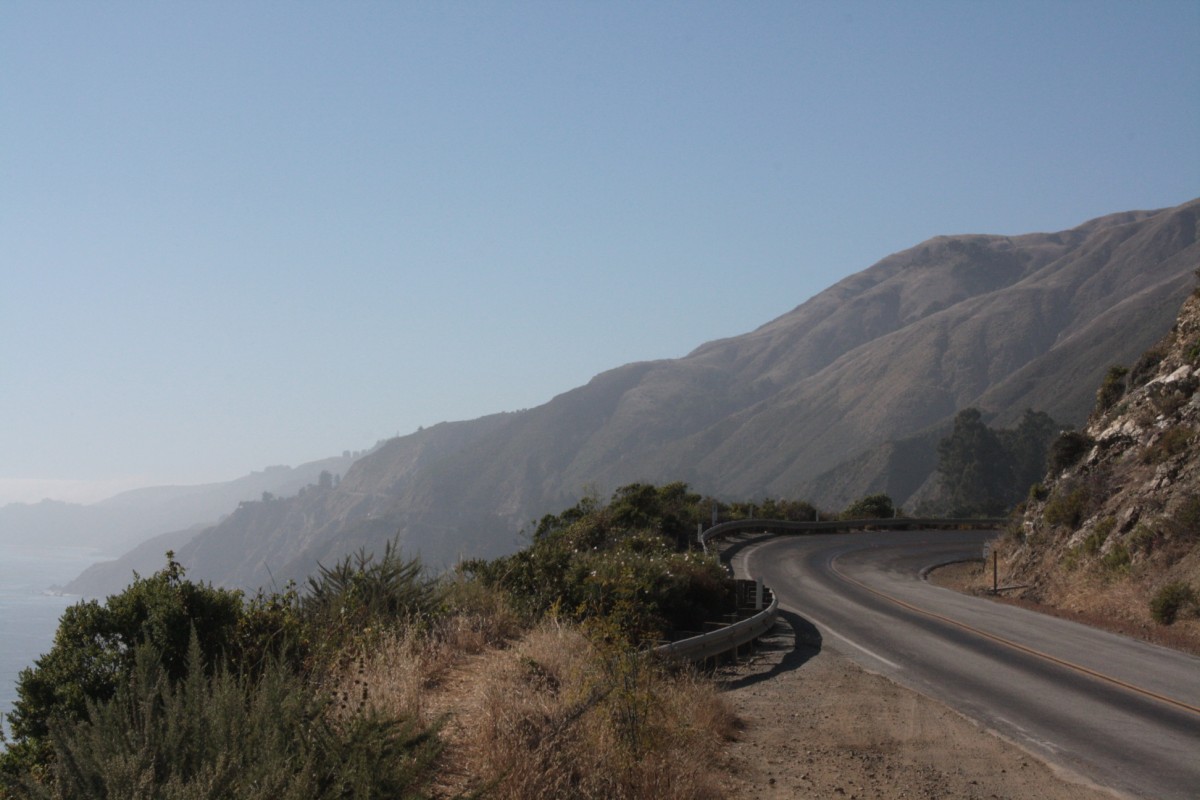 The concept of the Great American Road Trip has been immortalised in song, speech, film, on paper and canvas and probably many other mediums over the last century or so. Highways more famous than the land that surrounds them slice through dirt, desert and rock as if they’ve always been there. They feel untouchable, permanent and very much a part of US culture itself… But in Big Sur something st 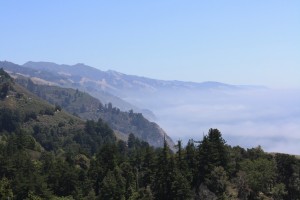 range happens: the road melts into insignificance in the face of its sublime surroundings. You get the feeling that it too is just a visitor, tolerated for the moment as it clings on to the side of the mountains or cowers in between the peaks it was cut out from. Clichéd as that may sound, I think that some people need to be rattled and/or subsequently calmed by a sense their own/man made insignificance every once in a while and Big Sur, which was a virtually inaccessible wilderness until 1937, does just that. Perhaps this is why those in need of inspiration or merely just a rest f 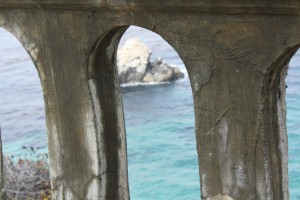 rom the anxieties and pressures of modern day living pilgrimage here to create/recharge and relax. The Esalen Institute, which provides a space for these very things, can be found spilling over the cliffs just off highway 1 here. In its grounds you can find the Big Sur Hot Springs (which Hunter S. Thompson was once amusingly the security guard of), though if you are a non-resident you can only swim from 1 – 3 am. We tried to book into one of these sessions, tempted to see whether you really are picked up from the road at 1 am on the dot then led down the hill by torchlight to the pools (where swimming costumes are apparently optional), but for better or worse we couldn’t make the only night which wasn’t booked up. 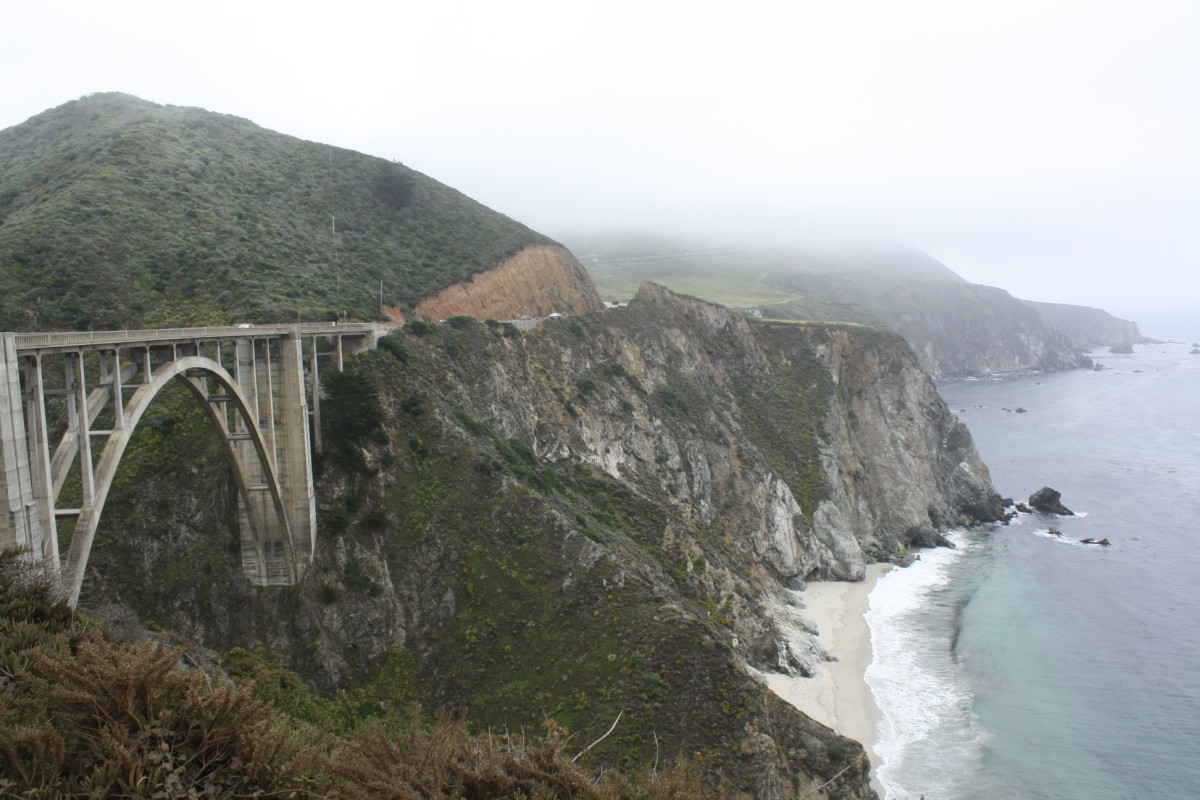 Night swim denied, we made our leisurely way along the precarious roads and bridges in daylight, stopping every so often to explore. We paused for the views and lunch at the Nepenthe restaurant (see Food section)

and later at the Henry Miller Library for a 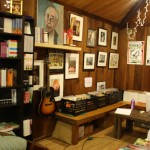 rest (see Bookshops). As beautiful as the views from the cliffs were, we really wanted to climb down to the shoreline to witness the Big Sur surf we’d heard so much about. I had originally wanted to track down the McWay Falls – a much-photographed waterfall which pours over a jutting out rock onto a beach below in the Julia Pfeiffer State Park; but not being equipped with an adequate walking map, we opted for a 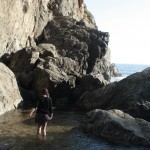 place we’d been told where to find – Partington cove. A 15-minute walk down a winding rock path, leads to a stream full of trout and a cool, dark tunnel, literally carved out of the rock, just beyond. We walked through to find a turbulent but 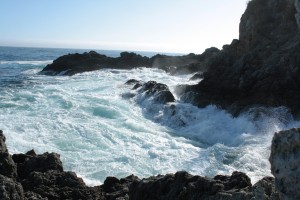 pretty cove where a fisherman in a dive suit was attaching a lifeline to a rock so he could go spear fishing amongst the kelp and not lose his way. Back through the tunnel, we clambered down to an adjoining cove to find a small paddle pool which had formed where the river met the ocean. The water was freezing but refreshing. 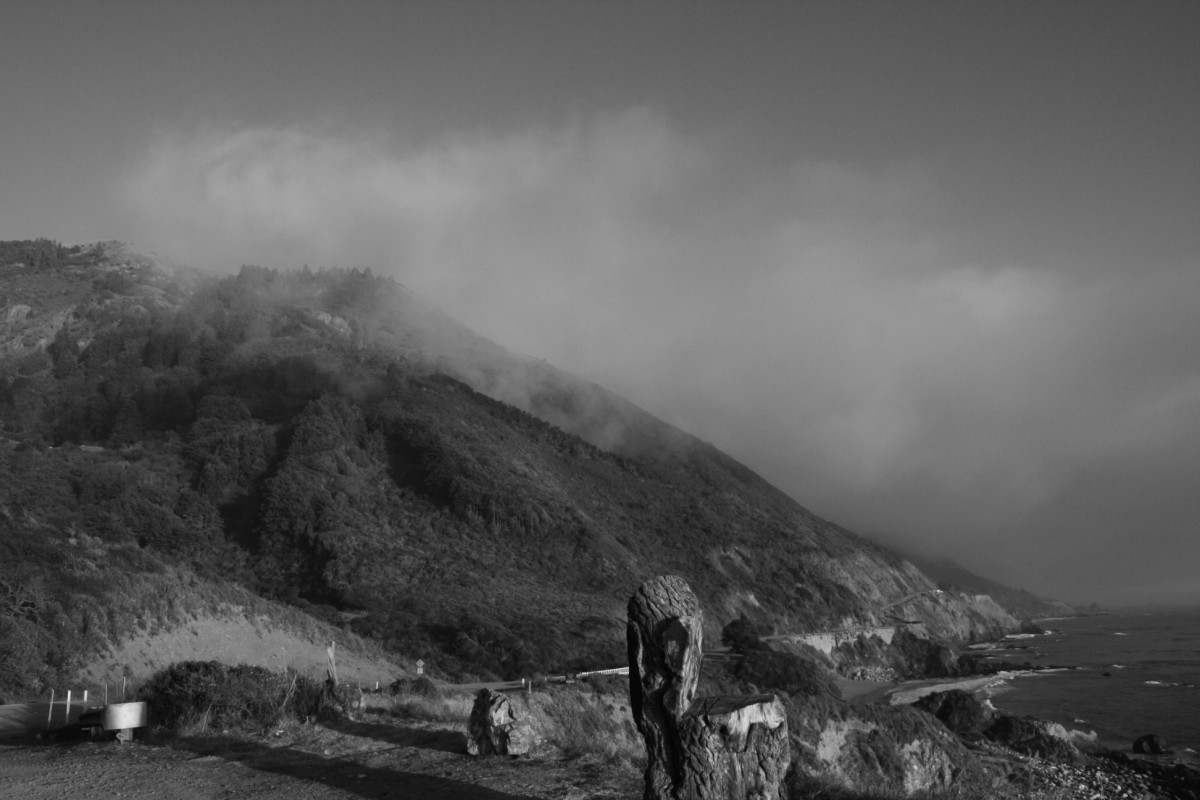 By the time we’d made the climb back up, it was late afternoon and the sun was beginning to sink. We were told by someone travelling in the opposite direction that the evening fog 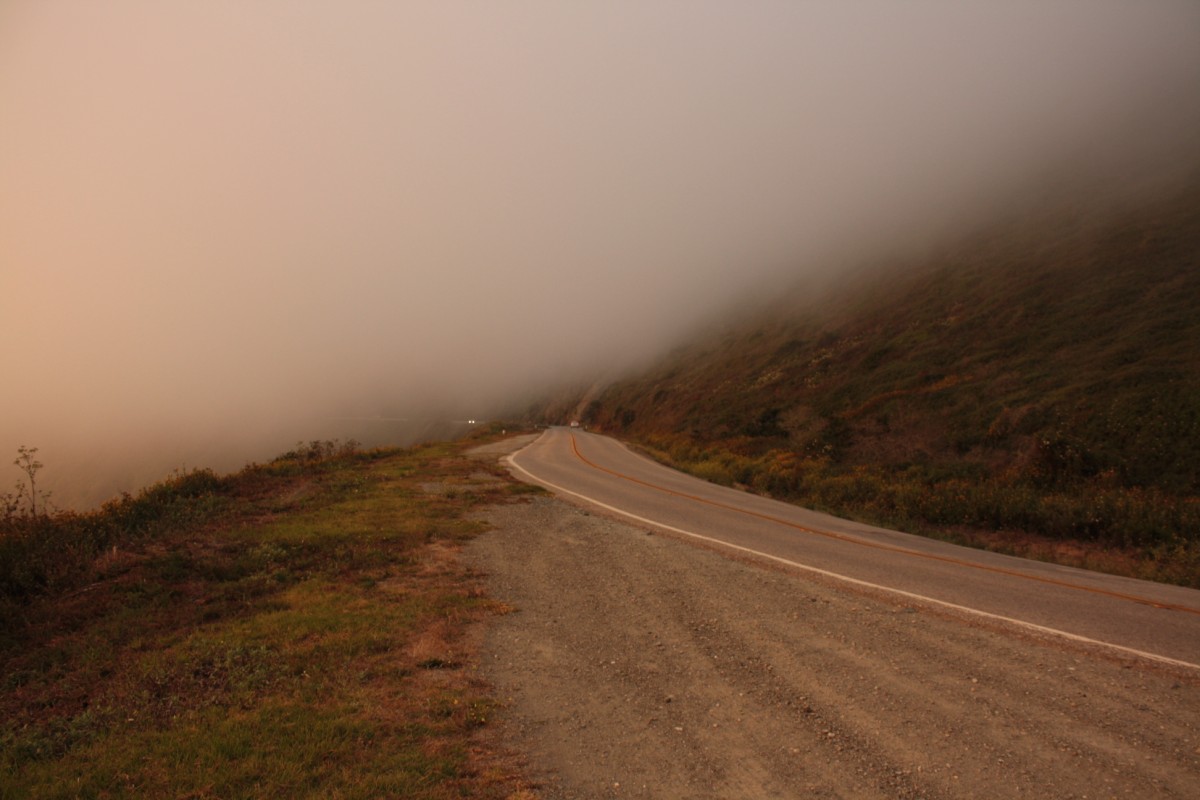 had begun to roll in, which we saw for ourselves as we got a little further down the road. As we drove on, the fog became thicker, darker and strangely mesmerising against the setting sun. We stopped on the 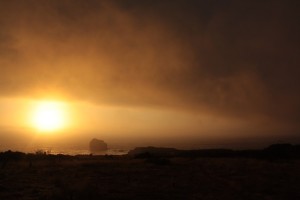 side of the road and trekked through a field to watch the orange glow battle with the thickening cloud (an effect we nicknamed ‘scorching fog’), the result of which was like something from the apocalypse, with blackened veils slowly suffocating the light – although I think the photographs probably illustrate the atmosphere better than I can describe. 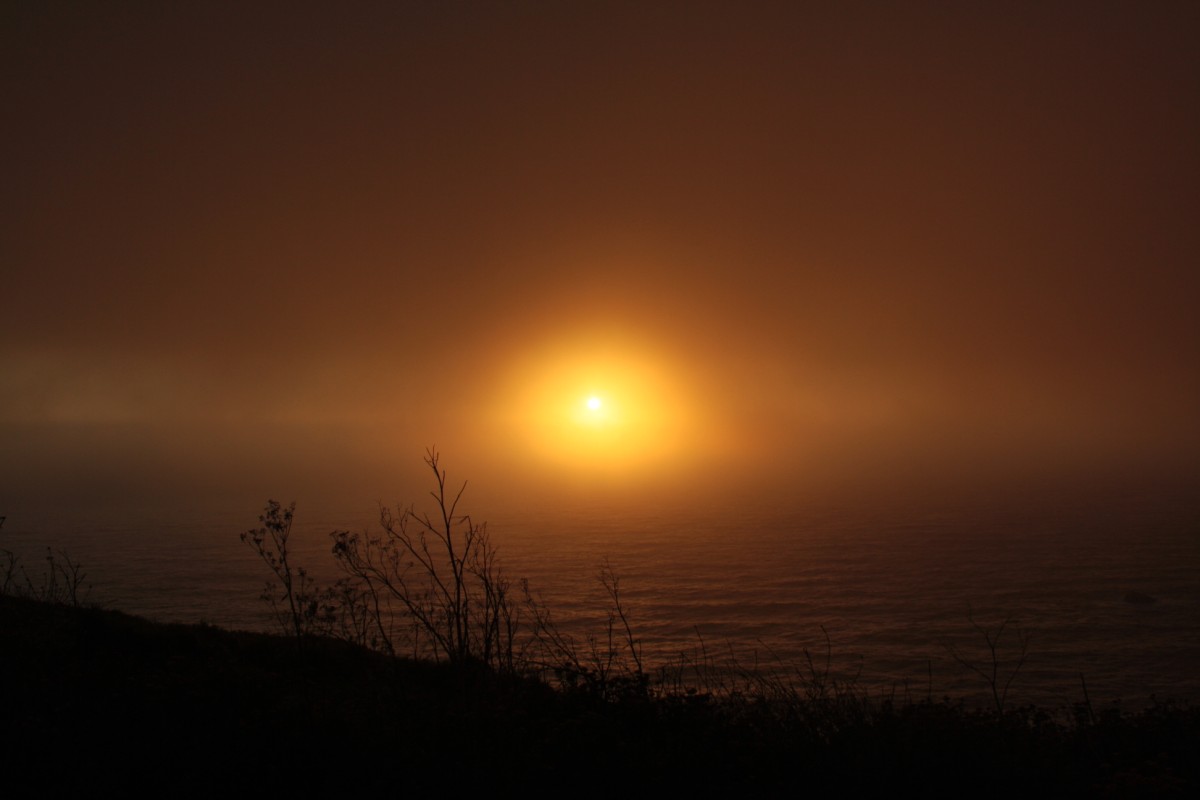 Not relishing the thought of navigating the remaining mountain pass in the dark, we got back in the car and quickened the pace a little. By the time darkness had set in fully, we had made it out of the mountain range and were once again travelling on a road level with the coast. A mellow cover of the Arcade Fire song ‘The Suburbs’ by a Mr. Little Jeans was playing on the radio, which seemed an appropriately fitting note to end the journey on as we headed towards the town of Cambria. 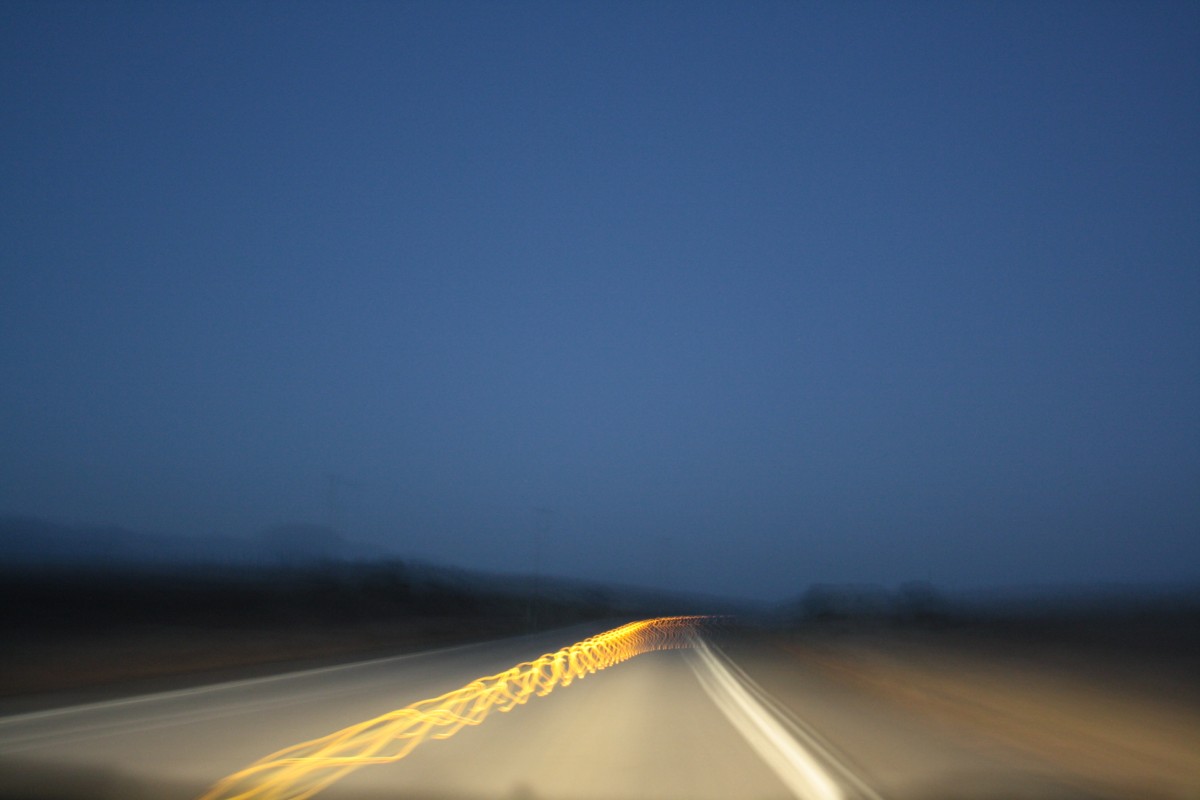