Due to the delays with the train getting into San Francisco (see Chicago) we only had a few days left on our hostel booking and further accommodation bookings down the coast meant that this visit would have to be brief. After catching a connecting bus from Emeryville station at 5 am, we eventually arrived in an overcast, cold and misty Union Square. Luckily, early breakfast had just started in the Downtown hostel so we recharged with some much-appreciated bagels and coffee before freshening up with a shower and heading out for the day. 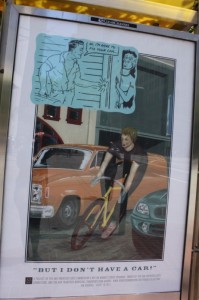 (perhaps this is helped by its waterfront location). The city plans to have cut carbon pollution up to 20% by 2012 and various initiatives are in place to reduce emissions such as smog checks, toll bridges, heavy parking restrictions, bike schemes and the switch from diesel to a biofuel blend (including recycled fry grease) for all of the 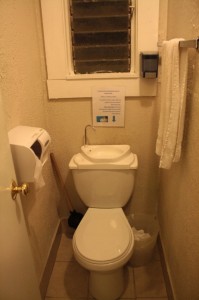 city’s buses and street sweepers. Even the hostel was doing its bit to be as sustainable as possible with initiatives such as toilet lid sinks in every bathroom (where you wash your hands in a basin above the toilet using clean water, which then flows into the cistern and is used for the next flush) and education programmes run in conjunction with local schools. San Franciscans seem to care about their environment as a collective. Perhaps this is due to an underlying awareness that the place they call home lies over an active fault line where nothing can ever be called permanent (except perhaps the Marin County fog) or perhaps it is reminders of the natural beauty which not only borders the city but somehow seeps into its nooks and crannies. 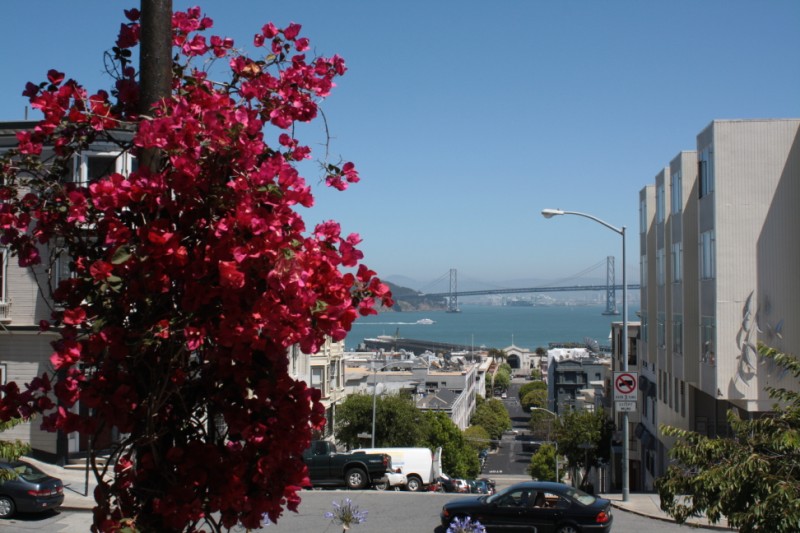 Our first venture of the day was towards the farmer’s market to pick up some things for dinner (see the article in our Food section). Farmer’s markets are taken very seriously 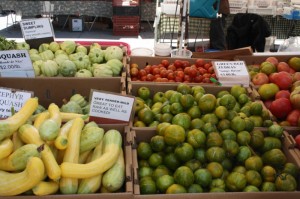 here and are becoming increasingly popular in many American towns and cities, which are embracing the locovore movement and with food which looks and tastes as fresh as it did, you can see why. We spent the rest of the day walking up and down the steep hills, popping in to various bookshops and cafés along the way. The sheer variety of independent shops, gig venues and businesses is one of San Francisco’s greatest assets in my opinion. The main chain stores, while still having a presence in the CBD, quickly become outnumbered by smaller, quirkier operations as soon as you head away from the high rise buildings. Café culture here seems to centre around community which is perhaps why such a number are able to thrive even when on the same street. There were always interesting 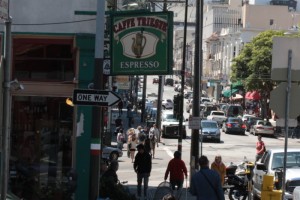 conversations to be heard and people seem to make the effort to talk to other people, whether they know them or not (much to the horror of some Japanese tourists we saw in one coffee house, when a man with a pair of cowboy boots and an actual sword in his belt sat down at their table with a dainty espresso cup).

The following day we walked a short way out of the city towards its northern shores and the Golden Gate Bridge. This is also home to several old dock yard areas where in recent years worn outhouse buildings have been reclaimed for creative purpose. Fort 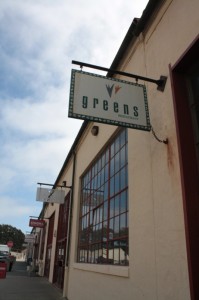 Mason is one such example and is now home to Greens restaurant – one of the city’s iconic vegetarian eateries; the Readers café which raises money for an attached library (see Bookshops); a children’s art centre and a dramatic society among many others. Someone had glued a red, 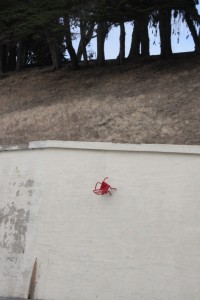 spider-like chair to the wall of the carpark outside and there were various other drawings and sculptures around, which serve as reminders – in the unlikely even that you ever forget – that San Francisco is the city of culture. For some cities this label may feel like a burden to maintain but as a mecca for nearly every creative enterprise under the sun, this city doesn’t look like it’s going to have to struggle. Many iconic software houses (e.g. Linden Labs, responsible for writing ‘Second Life’, Unknown Worlds and Apple) live alongside independent magazines, papers, publishing houses, music labels, fashion houses, cookery enterprises, knitting factories, theatres, cafés and many, many others. 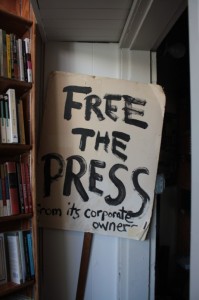 After a couple of days of walking extensively through the city’s streets and talking to people about our journey onwards, it seemed that the consensus was to hire a car (even though we had hoped to avoid this – the Pacific Coast Highway was something we didn’t want to miss and the option of car pooling also made it quite cheap and sociable). I had 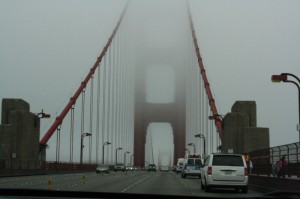 taken a train all the way up the coast from the opposite direction about five years ago and remembered all the five o’clock starts, bus replacement services and inaccessibility of some areas such as Big Sur, so we phoned around town looking into various options. Although we had hoped to be able to get a Prius, this was out of our price range so we settled on a small city car, purchased some maps and looked forward to having a rest from the backpacks for the few weeks it would take to slowly journey Southwards.