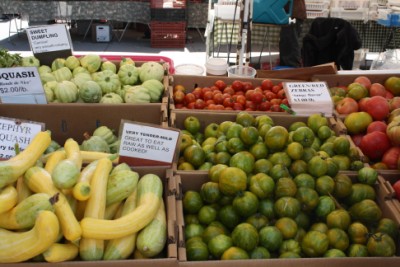 You can’t set foot in California these days without bumping into a farmer’s market. They are as popular as coffee houses and have fast become weekly events in many towns along the West Coast and beyond. The Ferry Building in San Francisco is a well known hub for ‘foodies’, housing restaurants which serve local, seasonal foods often sourced directly from the weekly farmer’s market held just 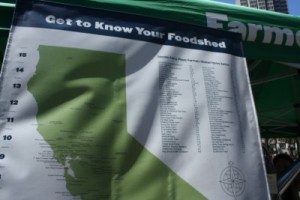 outside. There were about thirty farms with stalls at the market and the selection of food they had brought with them was pretty impressive. For any die hard ‘locavores’ there was a helpful map at the market entrance labelling where each farm had travelled from so you could decide for yourself on where you wanted to draw the ‘local’ line. We sampled about ten different varieties of peaches and nectarines before buying one of each (including the fashionable donut peach which looked a bit like someone had sat on it to me) along with a large zucchini-style vegetable called a ‘Zephyr’ squash. 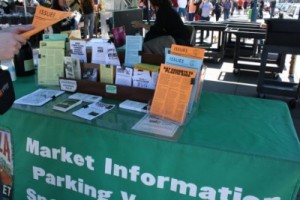 choices via info sheets on intensive/industrial & factory farming; sustainable seafood and sushi; organic produce; fruit and vegetable seasonality and food miles (we were particularly drawn to the example, that in 1996 Britain imported more than 114,000 tonnes of milk while it exported almost the same amount in the same year)!

The Centre for Urban Education about Sustainable Agriculture (CUESA) had a big presence here and were behind quite a few of the info leaflets. Their web site has most of this information on it, but in brief it is a good idea to at least consider your food choices once in a while because:

Information aside, this marked the beginning of Anna’s peach addiction so there must be something to be said for the taste of the food too! 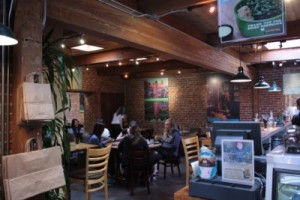 This independent chain of Vegan restaurants in and around San Francisco serves a wide selection of raw and “live” food – each dish is named after a particular state of mind, each with their own interesting ingredients (coconut maple ‘bacon’ being one). Like many Bay Area restaurants, they are very community focussed, offering quirky menu items such as a dinner which you pay for by donation or a 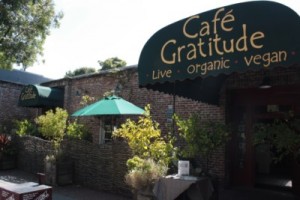 ”buy it forward” food item where you pay towards something for someone in your community who can’t afford the food. When we placed our order, we were asked if we would like to hear the question of the day. Appropriately,  this was: “what do you like most about your community?” Which we sadly never got the chance to answer, getting sidetracked by some vegan ice cream.

They are also expanding further down the coast: just after we passed through, on August 15th, the Santa Cruz branch of Cafe Gratitude opened… 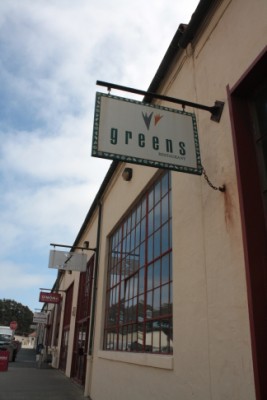 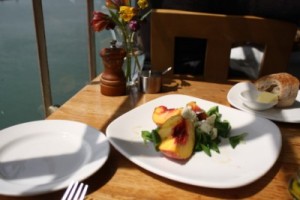 produce comes from Green Gulch Farm, located in the Marin Headlands just 14 miles away from Greens Restaurant. We managed to get there just in time for a lunch  of grilled blossom peaches with bellweather cheese, honey and watercress  (which worked as a combination and could probably be recreated fairly easily at home) followed by grilled vegetable brochettes and an espresso mousse cake.

Tweet
This entry was posted in Food and tagged Food, North America. Bookmark the permalink.