We took the overnight train to Chicago, not getting much sleep but passing through idyllic-looking rural farm land along the way. The Chicago stop-over was supposed to be brief – a one night stay in the downtown hostel with a quick visit to Lake Michigan and Anish Kapoor’s Cloud Gate sculpture 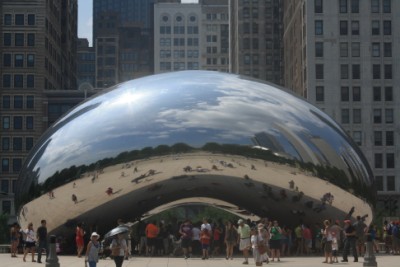 . However, when we turned up at the station the next day to board the California Zephyr, we were told that it was cancelled and were then ushered into a small ‘Amtrak customer service’ room full of irate people and one fraught Amtrak staffer. Apparently a barge had hit a railway bridge in a flooded area near Omaha and the Zephyr trains just arriving into Chicago were 17 hours late, so their solution was to cancel all trains for at least three days to let the congestion die down. The difficulty for Amtrak is that they don’t own most of the rails their trains operate on, they lease them from other companies (often part owned by freighter operators) and therefore they do not, for the most part, have priority over freight trains and are therefore subject to very long hold-ups. 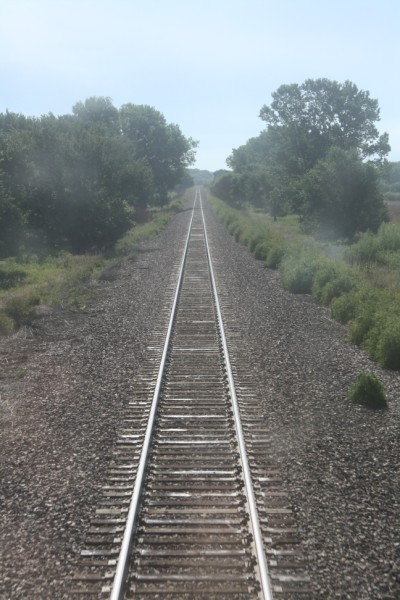 It looked like we would be stuck in Chicago for at least five days (the earliest train they could get us on was Sunday and it was only Tuesday). Typically, it was the weekend of Lollapalooza – the biggest music festival in the city’s calendar – so there were no cheap rooms left anywhere. Most places were sold out or quoted us $400 + per night. Going back to the Amtrak desk, a slightly more hospitable lady gave us a list of hotels which might offer us an Amtrak staff rate if we said the magic words Amtrak and delay. Luckily this worked and we were able to get a room for four of the five nights we needed somewhere downtown (we’d worry about the last night later). Although this was a fairly low point in the trip so far, we did happen to meet a really lovely lady in the passenger waiting room who had just disembarked from the 17hr delayed Zephyr coming from California. She was headed to London and very sweetly offered for us to stay in her house in Berkeley if we needed somewhere to crash when we got to San Francisco. Her trustfulness and generosity perked us up and helped us to remember why we were travelling in the first place.

Although we were keen to leave skyscraper cities behind, we couldn’t help but like Chicago and not only because there was a fantastic lightning storm on our first night. 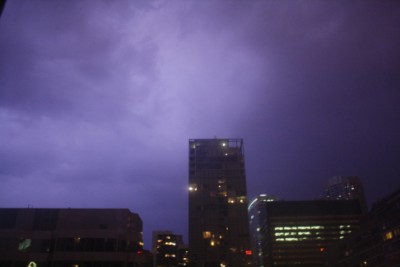 While we were here we spent most of our time camped out in the Argo tea shop reading, using the free wifi and making useless pencil marks on maps. When not in the tea shop, we were on the phone trying to get through to the Amtrak reservation line; exploring cinemas (we particularly liked the Gene Siskel film centre where we watched the

‘Road to Nowhere‘,  an Altman-esque exploration into movie making directed by Monte Hellman, well-known for his low budget ‘existential westerns’ and the 1971 American road movie Two-Lane Blacktop); or eating/drinking cups and cups of $3 soup at Fox and Obel’s market (see food section for more). We were also impressed with the number of independent coffee houses (Café Descartes being our

favourite) and free exhibitions we found. One of the more interesting ones had a piece on a photographer called Joel Sternfeld, whose photographs (collected together in a book called When it Changed) documented the look on the faces of delegates at the Montreal 2005 UN conference on climate change as they took in statistics and figures relating to global warming.

Four days went by fairly quickly and as the city began to swell with the thousands of people arriving for Lollapalooza, we got ready to spend the night in a 24-hour café. At the last moment however, a space became available on the Zephyr for Saturday and so we’ll have to leave that experience for another time. 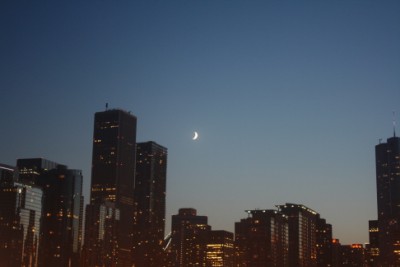