Tired of London (tired of life?) 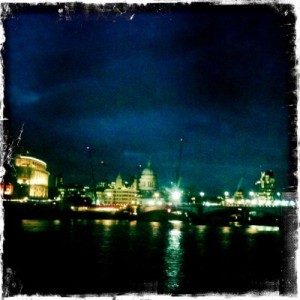 After nearly six years of living/working in London, the daily northern line commute/high speed pace of everyday life had started to grate. Much as I love London, I had begun to feel like I was seeing more of the underground and office than anywhere else and had noticeably started to adopt the corpse-like pallor and  slightly awkward/hunched posture of the 9-? commuter, used to putting their head down, elbows out and headphones in. This in combination with finding my first grey hairs was making me feel slightly older than my 27 years. I was lucky enough to really like the place I worked for (a fantastic environmental publisher) but after its independence was sold to the highest bidder earlier in the year, I saw an opportunity to change things, to swap the rapid for a considerably slower place of life. So the upshot is that we’re going to travel around the world without taking a plane, embracing slow (and hopefully low carbon) travel and rejecting a life where everything must be done immediately. There’ll be long (blissful?) periods at sea with no email contact but I will get over my temporary technophobia enough to update this blog every now and again for anyone interested in what we’re doing.

Tweet
This entry was posted in Travel and tagged Our Journey, United Kingdom. Bookmark the permalink.

2 Responses to Tired of London (tired of life?)